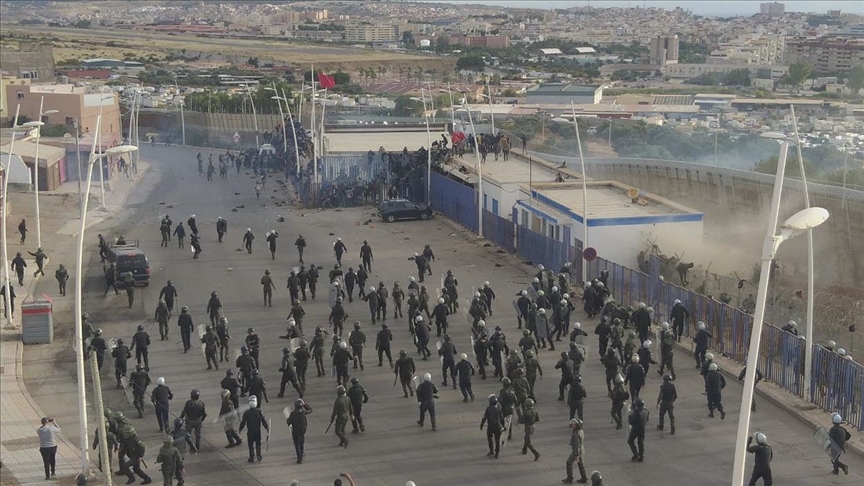 Hundreds took to the streets across Spain on Sunday to protest the lack of an investigation into the deaths of up to 37 migrants trying to cross from Morocco into the Spanish exclave of Melilla.

Around 2,000 migrants, many from Sudan, tried to cross the militarized border fence on Friday and were met with force from both Moroccan and Spanish authorities. Videos from the Moroccan side of the border show what appear to be dead bodies and severely injured people strewn across the ground without receiving medical attention.

Other images show hundreds of people, some with clear injuries, lying in a pile on the ground with their hands tied behind their backs.

“The victims of the tragedy in Melilla agonized for hours under the cruel gaze of those who were supposed to help them and did not do so,” tweeted Garzon.

On Sunday, the Moroccan Association for Human Rights (AMDH) published an image showing authorities from the North African country digging around 20 graves, which the organization says were meant for the migrants who died in the pandemonium.

“Without investigation, without autopsy and without identification, the authorities seek to hide the disaster. A true disaster,” the AMDH said.

On Saturday, several non-governmental organizations released a joint statement demanding a probe into the treatment of migrants during their attempt to cross the border. The AMDH specifically pleaded against burying the bodies without an investigation.

However, several politicians in Sanchez’s ruling coalition are calling on the prime minister to rectify his statements and launch an investigation.

“My condolences to the loved ones of everyone who unjustly lost their life,” said Deputy Prime Minister Yolanda Diaz. “It makes sense to clarify what happened … no one should die like this.”

On Sunday, however, when asked, European Council President Charles Michel said: “We totally support Spain and all countries on the frontline protecting the EU’s borders. Migration is a difficult challenge for everyone. I express my support for the Spanish authorities.”

Dozens of Moroccan and Spanish police officers were also injured during the storming of the border, where migrants were armed with homemade knives, as well as sticks, stones, and hooks to climb the border fence, according to Spanish news agency EFE.

Moroccan police used tear gas and Spanish agents fired rubber bullets to disperse those trying to climb the border fence, according to images and reports.

This is the largest mass movement on this border since Spain and Morocco boosted bilateral cooperation after Madrid decided to support Rabat’s position on the independence of Western Sahara.

Last summer, Moroccan authorities stood passively by as thousands swam into the Spanish enclave of Ceuta amid a diplomatic spat over Spain treating the separatist leader of Western Sahara for COVID-19.

Maleno Garzon of Walking Borders, a rights group for asylum seekers and refugees, warned on Friday that the recent storming of the border fence could be “used as an excuse for systematic repression (of migrant communities) on a national level” in Morocco.

On Sunday, the Moroccan General Directorate of National Security said police carried out an operation against 59 irregular migrants planning to cross into the Spanish city of Ceuta, also in North Africa.