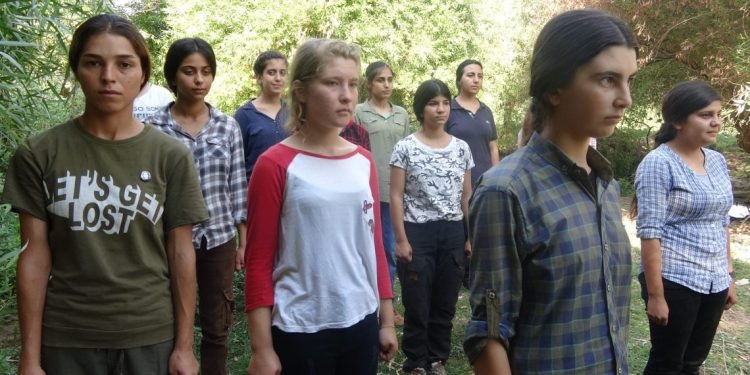 PKK/PYD bragged about 14 very young girls joining the ranks of the terror group in a video released online. Teen girls all of whom seemed under the age of 15 pledged alliance to the terror group and urged others to join to fight the Turkish state and all capitalists around the world.

PKK/PYD is notorious for kidnapping underage teens to force them into arm fighting for its far-left agenda. Extensive operations of the Turkish army in the recent years have dealt a heavy blow to the recruitment and kidnappings of the terror group. While PKK moved most of its fighters to Syria to prompt up its sister organization’s position there, it has been having hard time to recruit new fighters.

Turkish media has extensively been reporting on thousands of teenagers kidnapped by the PKK, the terror group released a new video to show its new recruits.

Western media including women’s magazine Marie Clair and certain politicians have been glorifying PKK/PYD for having women fighters on its ranks. Turkish state, on the other hand, has been trying to show the whole world the notorious face of the terror group. PKK/PYD baldly exposed itself in the new video by showing 14 very young girls after kidnapping them. Several female fighters of the PKK have confessed upon surrendering to the authorities that raping of girls among PKK/PYD by high ranking officials is a very common practice.

Meanwhile, several parents -mostly mothers- have been staging a sit-in protest in front of the Diyarbakir office of pro-PKK party HDP demanding the return of their kidnapped kids. Aiming to get rid of some of the pressure, PKK has released a few kids after the protests started. Turkish media estimates PKK/PYD still holds more than 10 thousand kidnapped soldiers. The terror group took advantage of the so-called peace process between 2013 to 2015 to kidnap thousands more kids to force them into arm fights. Turkish government had been heavily criticized back than for providing opportunity to pull itself together but did not heed the criticism for the sake of ending the 4 decades long bloody terror.

Lebanon: Turkey Offers Humanitarian Assistance While Macron Pursues Colonial Goal out of Catastrophe
Is Israel Behind the Beirut Blast?