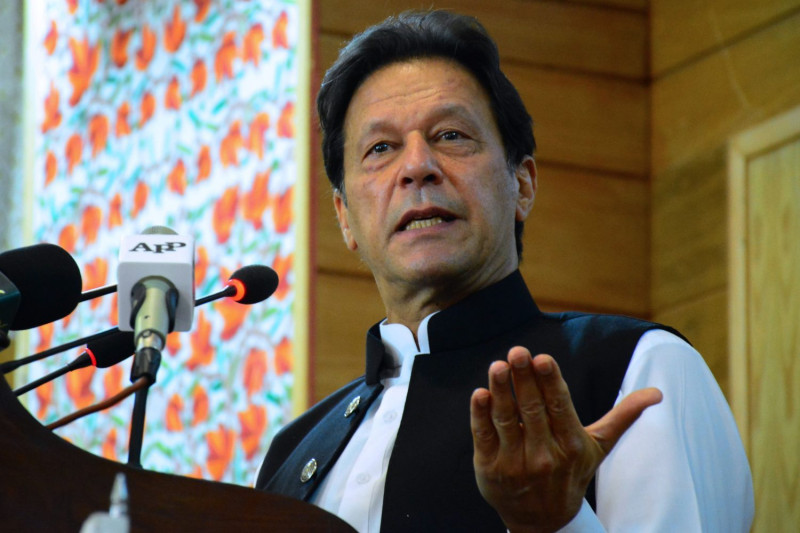 Pakistan’s outgoing Prime Minister Imran Khan is going through hard days due to an alleged attempted regime change, which he claimed was engineered by the U.S. administration. Khan stated that an undersecretary from the U.S. State Deparment sent a letter to Pakistan’s ambassador to Washington and threatened to overthrow Khan via a no-confidence vote due to the prime minister’s visit to Moscow, among many other reasons.

Indeed, Khan’s coalition partner switched to the opposition and some of his lawmakers changed loyalties toward the opposition benches, which enabled opposition parties to hold a majority in parliament. In response to the premeditated plans, Khan blocked the vote of no-confidence and persuaded Pakistani President Arif Alvi to dissolve parliament and allow snap elections. If the Supreme Court decides that meddling took place in Pakistan’s internal politics, new elections will be held and Khan will probably win the elections thanks to public support behind him.

China is not a secret

When allegations against Khan are analyzed carefully, it is hard to be convinced. It is not a secret that Pakistan has very good relations with China, which is the new rival superpower standing in the way of the U.S. One reason for Pakistan to be the “iron brother” of China is that it is a sovereign country and, like any other country, it acts per its interests. For example, Pakistan owes its military strength mostly to China as the latter helped it produce indigenous weapons. China also supports Pakistan fiscally. Second, both Pakistan and China have a common adversary in India. Third, Pakistan seems to have been sidelined by the U.S. since Americans evidently prefer better ties with India. Remember when India made its first atomic bomb, the U.S. called it the “smile of Buddha” while it demonized Pakistan’s bomb as an “Islamic bomb.”

While such discriminatory policies have been disturbing the Pakistani political circle and people for a long time, Khan openly criticized America’s anti-Pakistani actions and followed a more independent policy from the U.S. Khan was quite disturbed by the U.S. attitude and did not hesitate to react boldly. For example, he was unhappy with U.S.’ decision to allow India to continue trade with Russia while it asked Pakistan to condemn Russia over Ukraine. He also condemned the European Union, which asked Pakistan to remain distant from Russia but remained silent when the Indians re-annexed Kashmir.

He countered the U.S. for attacking Pakistan using drones while Pakistan was an ally of the U.S.-led international coalition against the war on terror. Over 80,000 Pakistanis were killed after the U.S. invaded Afghanistan in 2001 even though Pakistan sided with the U.S. Khan has also been against U.S. drone attacks in Pakistan from day one. Besides, he has cemented the fight against Islamophobia. He has more appeal because he is a charismatic figure, has lived in the West, speaks well, has visited Western states and spoken against injustices facing Muslims.

It is true that Khan has become the biggest defender of China. He lauds China for its economic success and relentless support of Pakistan. Khan probably sees Western countries as hypocritical and China as honest. Leaving aside China’s character, the double standards of Western countries is a general complaint argued by many.

Look at Russia’s invasion of Ukraine, for example. The American and European reactions were unprecedented (and perhaps correct) and at the utmost level. Yet, they were silent when Syrians were massacred or displaced. Also, Western powers don’t tolerate elected leaders unless they side with them. Khan’s administration would probably not have been questioned had he put some distance between Pakistan and China as well as Russia.

Thus, the matter is not how Khan uses power but for whom he uses it and who benefits from it. The decision to conduct snap elections is a good move since Pakistanis will decide the future of Khan’s premiership. However, past experiences show that democratic elections are not enough to stay in power in Pakistan. Let’s hope other power holders of Pakistan will also respect the election results and prioritize Pakistan’s interests over those of foreign powers.