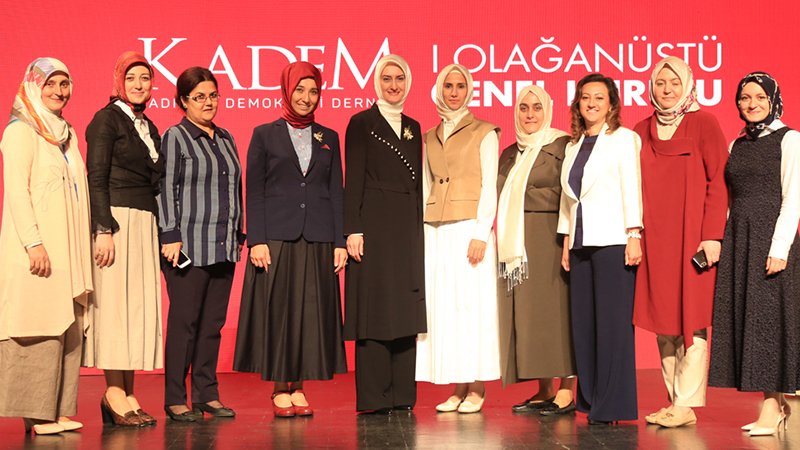 Leaders from dozens of European countries convened in historic Ciragan Kempinsky hotel on the Bosphorus in May of 2011 to sign the treaty of the Council of Europe to prevent and combat violence against women. Turkey became the first country to ratify the agreement by having it approved in the Parliament on March 12th, 2012. 33 other European countries ratified the treaty until 2019 but now Turkish government ponders to withdraw from it citing increasing public outcry. One of the leading supports to the agreement, however, came from an unusual group. KADEM, a women rights group deputy of which is the daughter of president Recep Tayyip Erdogan campaigns hard to save the agreement.

“We against presenting Istanbul Convention as the absolute solution to prevent violence against women but we are also against demonizing an international agreement,” said the head of Kadem, Saliha Okur, during one of the leading women’s morning shows on a national network. “It does not mean we (women) would all be killed if Turkey withdraws from this but we (Kadem) support every single initiative that contributes this fight to end the violence against women,” she continued.

Turkey’s conservative circles have been complaining about the Istanbul Convention for years claiming that it aims to destroy the traditional Turkish family values while campaigning for LGBT rights. “This agreement is the biggest blow to our society and values,” said a 43 years old pharmacist, Cemalettin Cakirtas. A large section of Turkey’s dominating society share similar views to those of Cakirtas’. A lot if Turks also believe thar the agreement provides unnecessary rights to women in case of divorce. “Indefinite alimony right just annihilates men. And Istanbul Convention provided indefinite alimony right to women,” Cakirtas claims. Turkish men have now became paranoid thar a lot of women just get married and file for a divorce to earn indefinite alimony.

Turkish president Recep Tayyip Erdogan ordered his officials to study the complaints to reconsider the future of the treaty following mounting reactions from especially from his own constituency. Secular circles rejected the idea saying that it would only pave the way for more violence against women. But one odd and perhaps the most effected rejection came from Kadin and Democracy Association or KADEM a Women rights NGO that campaigns to raise awareness in Turkey. Kadem has come out several times to express its opinion to defend the Istanbul Convention which turned the conservative group into a target of of those who defend more radical view when it comes to the subject.

Istanbul convention debate has proven how Turkey’s democracy culture has also advanced. “While president Erdogan ordered his officials to look into the subject and considers withdrawing from the convention, his daughter, as part of Kadem, campaigns to save the treaty,” said Ankara-based journalist Ahmet Hamdi Sisman. “This is a true democracy. Even beyond glorified western democracy. President heeds his constituency but his daughter on the opposite side,” Sisman reiterated.

Turkey witnessed 127 women murder in 2011 when the Istanbul Convention was signed and the murders went up to 396 six years later. Most recently, a 27 years old university student was brutally murdered last month by her former boyfriend. The woman victim has been criticized by some circles for having an affair with a married man.