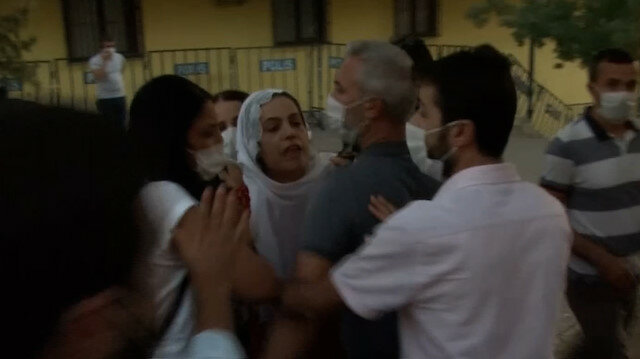 Pro-terrorist-PKK party HDP deputy Remizye Tosun attacked protesting parents outside of her party’s Diyarbakir headquarters on Monday. Tosun called the grieving parents dogs when she was being escorted to her car. Dozens of parents have been staging a sit-in protest in front of HDP office in southeastern city of Diyarbakir to demand the release of their kids kidnapped by the PKK.

Hacire Arar started the sit-in protest back in August 2019 holding Peoples Democratic Party or HDP responsible for luring her son into joining the terror group. She and 15 other parents have since been reunited with their families. The protest of the grieving parents have largely been ignored by the western media. Several mothers still continue the protest hoping to get back their kids from the terror group, PKK. Tireless action of the parents have damaged HDP’s image in the eyes of people.

Pro-PKK party HDP deputy Remziye Tosun attacked the grieving parents staging protest right outside of HDP headquarters in Diyarbakir on Monday. Tosun called the protesting parents dogs. “They must be short on bones,” Tosun yelled when she was being escorted to her car by the police and her crowded entourage.

A father at the sit-in yelled “They (HDP) took 15 years old kids to the mountain,” referring to the Qandil mountain where PKK headquarters are located. Parents say HDP Diyarbakir office act as a recruitment center for the PKK and HDP members lure vulnerable kids into fighting for the terror group while kidnapping those who refuse to join.