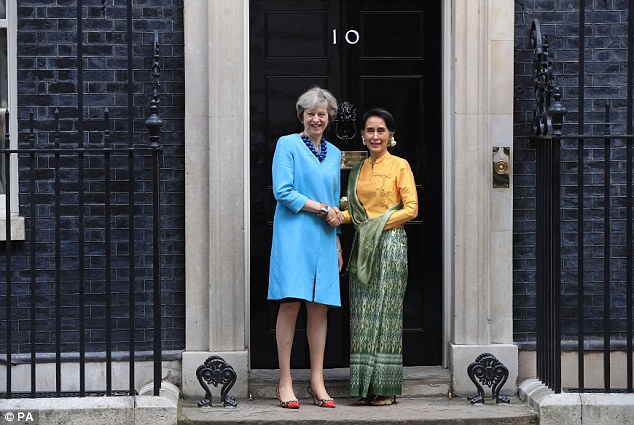 When the newly appointed Prime Minister of the United Kingdom, Theresa May, accepted Myanmar’s Aung San Suu Kyi  in Downing Street last year to discuss country’s transition from military rule to democracy, the two gave the media warm pictures. At that moment, Myanmar army’s bloody campaign against Rohingya Muslims had already been in its 4th year. In order to understand how and why the British politicians could turn a blind eye to Myanmar’s Buddhist-dominated army’s violence against its Muslim population, one needs to understand the root of the problem, where the British hand is an open secret.

When the imperialist British Empire dominated the Indian region, they abused the local ethnic groups for their own interests. The territory where Myanmar is located today became a British colony in 1824. There were no current borders back then in the region. The British forced the Muslims from the Bengal region to Rakhine (where Burmese Muslims are currently persecuted) in 1824, to use them as a labor force in the East India Company. So after that slavery-like settlement policy of the British, the Muslim population increased dramatically in Rakhine.

Buddhists in the region saw the newly settled Muslim population as a threat to themselves. The British officials formed the Myanmar army consisting mostly of non-Buddhists because Buddhist Monks had started an independence movement against the British rule. While British officials formed an army consisting of Muslims and other small ethnic groups, one man mustered a Buddhist army in exile: Aung San. Aung San is no other than the father of Aung San Suu Kyi. This happened right before the Second World War.

At the beginning of the Second World War, Aung San’s Buddhist army, which was supported by Japan fought against Great Britain. And the British officials armed the other ethnic groups to prevent Japan from advancing inside what is today Myanmar. Towards the end of the war, the tide had turned in favor of the British Empire, as did Aung San. Quickly switching sides, Aung San formed a Buddhist-dominated state in 1945 named Tatmadaw with the support of Great Britain. After that the British this time started arming the Buddhists, knowing well that those arms would turn on the Muslim population later on.

So as the source of the wars in the Middle East today originated mostly in the British rule during the First World War, the genocide campaign that started back in 2011 in Myanmar was created by the very same hand almost 200 years ago. In every place today where the Great British empire set foot, there is fighting, war or some sort of persecution of one ethnic group. And these conflicts are now being used as pretexts to intervene once again in the formerly dominated colonies.

Aung San Suu Kyi was awarded a Nobel Peace Prize back in 1991 “for her non-violent struggle for democracy and human rights.” – Here we need to remind ourselves who Alfred Nobel was: the person who invented the dynamite and made a lot of money selling it to the whole world. So the foundation of the Nobel Peace Prize was actually formed with money gained from selling dynamite – Aung San Suu Kyi has indeed been fighting to end the junta rule in her country. Because the Myanmar army was and is nothing like the one her father formed with the British support in 1945. Over the years, the army slipped toward Chinese influence and put the daughter of the founding father of the state under house arrest for years. In 2011, a new chapter started in Myanmar. The military loosened  its grip on the country and opened a way for the democratic process. However, Aung San Suu Kyi’s democracy meant destruction for Rohingya Muslims. The very same year, the bloody campaign started against Muslims in the South of the country.

What is only a summary of Myanmar’s history here explains the very reasons why and how the genocide campaign in Myanmar started. And you may also have gained a slight idea about how Britain and the rest of the West for that matter welcomed a leader whose so-called democratic transition brought nothing but blood to Myanmar.

And lastly, the Western institutions and the media prefer to call what has been happening in Myanmar an “ethnic cleansing”. This term was coined during the Bosnian war to avoid the claims that there was a genocide taking place in the heart of Europe. So far only the Turkish President Recep Tayyip Erdoğan dared to openly call the Buddhist-led campaign a genocide. And the Nobel Peace Prize winner, Aung San Suu Kyi, blamed the Turkish deputy prime minister Mehmet Simsek (a respected economist through out the world), for circulating fake pictures of the atrocities. According to Suu Kyi, the army has been battling an insurgency. She could only be right if the whole world had not seen the satellite images of razed Muslim villages, let alone many footages of the Buddhist army torturing and killing civilians.

Arakan army. Are you kidding?
Arakan; A region left to be massacred
Comment