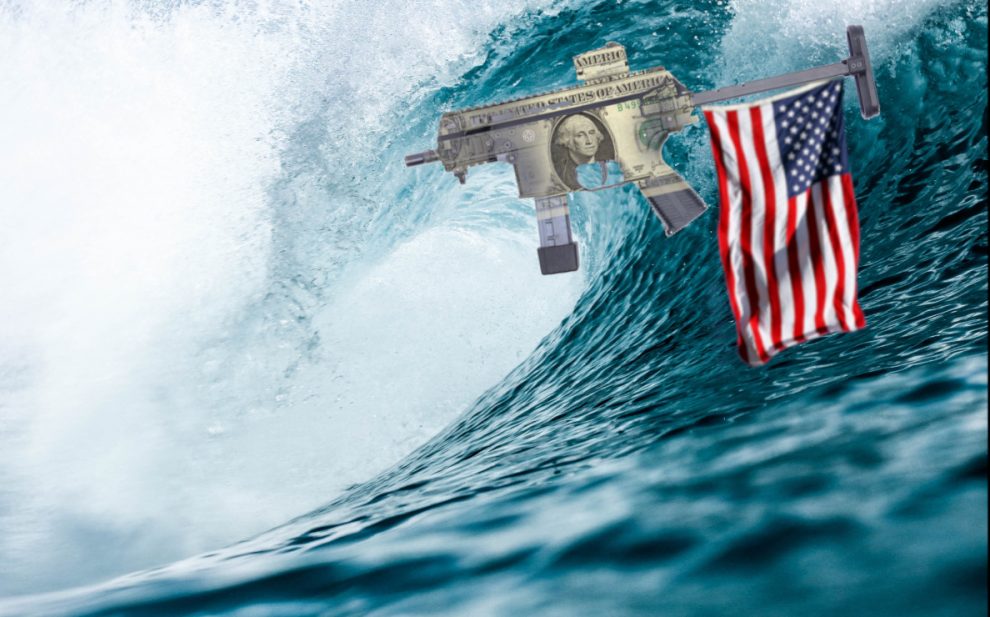 Turkish economy is the perfect showcase for how geo-politics affects economies, or more precisely, how a country’s rejection of subordination in international relations leads to threats of economic sanctions by powerful states

Recent fluctuations in the value of the Turkish Lira have placed Turkish economy in the limelight again. Analysts point at a number of issues, mostly those related to domestic politics or economic management, which may be responsible for the continuation of the economic distress. All these explanations have some merit and there is certainly plenty the Turkish administration should be doing to overcome fragilities.

However, it seems that power relations at the global level and their direct influence on Turkish economy are mostly ignored. I would argue that most of Turkey’s short-term economic troubles are due to the diplomatic conflict with the U.S. over regional issues and continuing threat of sanctions against Turkish economy.

A number of critical events in recent years have put Turkey and the U.S. at odds. The parallels between certain turns in Turkish economy and clashes in the U.S.-Turkey diplomatic relations are difficult to overlook.

Most recently, for instance, President Erdogan took a strong position [1] against President Trump’s declaration to recognize Israel’s illegal control over the Golan Heights. The very same day, March 22, Turkish Lira depreciated by 6 percent [2] within hours. Although it swiftly regained value thanks to the quick reaction of the Turkey’s Central Bank, the incidence has once again started discussions about Turkey’s economic well-being. This alone proves how responsive Turkey’s financial markets are even to minor fluctuations in the Turkey-U.S. relations.

The most important source of tension between the U.S. and Turkey is arguably Washington’s support for the YPG in Northern Syrian. Turkey considers the YPG as a terrorist organization because of its association with the PKK and its previous attacks on Turkish civilians. The U.S. started to openly arm and train the YPG forces in 2014 while their affiliates were still carrying out suicide bombings in Turkish cities [3]. Turkey is fighting the YPG and insists on eliminating them from the region while the U.S. sees the organization as a trustable partner.

Last January, a few weeks after the announcement that the U.S. army is retreating from Syria, President Trump tweeted [4] that the U.S. “will devastate Turkey economically…” if Turkey takes further military action against the YPG. President Trump’s tweet saw the Turkish lira lose 1.6 percent [5] value against dollar on the same day, Jan. 14. It took a phone call between Erdogan and Trump for the Turkish Lira to regain value next day.

When he was asked to explain the tweet, U.S. Secretary of State Mike Pompeo said [6], “we have applied economic sanctions in many places, I assume he is speaking about those kinds of things”. So, the threat of sanctions is as explicit as it gets.

Actually, the U.S. administration has already imposed sanctions on Turkey. Last year in August, President Trump doubled the tariffs [7] on Turkish steel and iron in order to pressure the Turkish government to release an American pastor who was detained on charges of connection to the failed coup attempt in 2016. Serious claims about U.S. involvement with the coup attempt is also a source of tension between Turkey and the U.S. in general.

Following the announcement of sanctions, a capital outflow took place and the Turkish Lira lost 20 percent value [8]. In order to halt the process, the Turkish central bank was forced to raise its benchmark interest rates from 13.5 percent to 17.25 percent and then to 24 percent. As a matter of fact, this was the beginning of Turkey’s negative divergence from other emerging market economies.

In response to the threat of further sanctions, last August, Turkish President Erdogan said [9], “failure to reverse this trend of unilateralism and disrespect will require us to start looking for new friends and allies”, proving that Turkey chooses economic distress over submission to demands of the U.S. Since then, investors have been overly sensitive to the geo-political powerplay between Turkey and the U.S.

Nowadays, the dispute between two countries centered around Turkey’s deal to purchase S-400 air defense systems from Russia [10]. The U.S. wants Turkey to buy the American-made Patriot missiles instead, but refuses to transfer technological know-how [11]. Turkey is more interested in developing its own military capacity and end its dependency on the U.S., or any other country for that matter.

Accordingly, Turkey turned to the Russian-made S-400s because of the technology transfer component of the deal. The U.S., in turn, has suspended sales of F-35 fighter jets [12] to Turkey even though Turkey has invested one billion dollars in the project.

David Satterfield, a nominee for U.S. ambassador to Turkey, speaking at the U.S. Senate on Apr. 11 said [13], “by moving ahead with its purchase of the Russian S-400 missile defense system, Turkey puts its participation in the F-35 program at risk and faces potential sanctions under CAATSA.”

Note that CAATSA (Countering America’s Adversaries Through Sanctions Act) was previously used to impose sanctions on Iran, N. Korea, and Russia. Satterfield also quoted Vice President Pence’s remarks [14] about the issue on Apr. 4 that Turkey must “choose” between Russia and NATO, referring to the S-400 deal. As expected, these statements have cast a chill over Turkey’s financial markets.

The U.S. argues that S-400s are incompatible with the NATO systems. Interestingly, NATO Secretary-General Stoltenberg seems to disagree with Pence [15]. “It’s a national decision for each NATO ally to decide on procurement of capabilities,” Stoltenberg said on the same occasion. Furthermore, Greece, another NATO ally, already has S-300 missiles. The first delivery of the S-400 missiles will take place in July 2019. Until then, the U.S. is likely to continue to show the stick to Turkey. Investors are watching, of course.

Having such unstable relations with the US imposes a certain level of unpredictability to the Turkish economy, which is why investors are hesitant to return back to Turkey despite favorable investment conditions after the steep rise in interest rates and gradually cheapening Turkish assets.

However, following the discussions about Turkey’s problems in the international media, one might think that Turkish economy is in perfect isolation and the slow-down in economic growth or currency volatility is all Turkey’s own doing.

The truth is, Turkish economy is the perfect showcase for how geo-politics affects economies, or more precisely, how a country’s rejection of subordination in international relations leads to threats of economic sanctions by powerful states. It is much easier to find the real reason why Turkey is facing financial challenges in U.S. foreign policy decisions and Washington’s bullying of its allies rather than Turkey’s domestic politics or economic management.

This does not mean that there is not a lesson for Turkey to take. Turkey has learned the hard way that political independence comes with economic resilience. Fragilities in Turkish economy makes it easier for the U.S. to use the threat of sanctions as leverage in negotiations.

Turkey’s long-accumulated foreign debt, mostly denominated in dollars, has to be dealt with through strong and fast reforms towards productive and export-oriented sectors, for which Turkey has already made some progress recently. Furthermore, the choice a country makes between its domestic resources and foreign capital is not merely an economic one. So, Turkey’s savings rate should be boosted.

In the meantime, the government in Ankara will continue to confront American diplomatic unilateralism and hopefully remind Washington of the geo-strategic importance of Turkey as a critical ally.

M. Metin Basbay is a Researcher at TRT World. His research mostly focuses on economic policy in the context of underdeveloped and developing countries. Metin holds a BA in Economics and a BA in Sociology, both from Bogazici University and is currently a PhD candidate in Development Studies at the University of Cambridge where he also completed his MPhil in Economics.