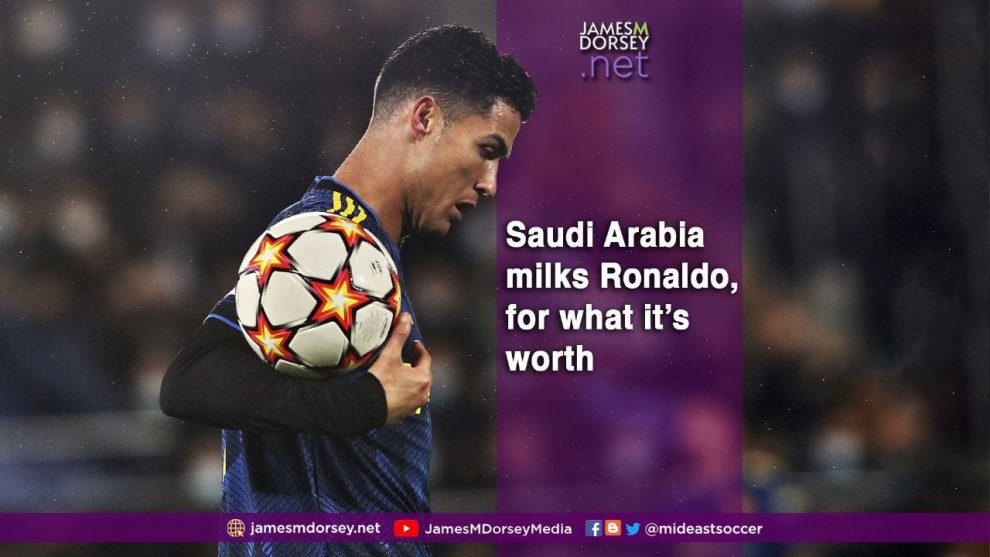 Saudi Arabia isn’t wasting time to milk for what it’s worth soccer superstar Cristiano Ronaldo’s move to the kingdom. Neither are others in the Gulf eager to join the bandwagon.

Playing for nine-time Saudi league champion Al Nassr FC for US$211 million over 2.5 years, Mr. Ronaldo appears happy to do the Saudis’ bidding.

He was welcomed this week by fireworks and deafening roars in the club’s packed, 25,000-capacity Mrsool Park or King Saud University Stadium in Riyadh.

Mr. Ronaldo’s value to the kingdom goes beyond putting Saudi soccer on the world map. The player is likely to boost Saudi efforts to replace Qatar, last month’s World Cup host, and the United Arab Emirates, as the go-to-sports hubs in the Gulf.

The Saudi push is part of the broader positioning of the kingdom as the region’s centre of gravity for anything and everything in competition with the smaller Gulf states that have a first-starter advantage but lack market size and geographic depth and suffer from greater demographic deficits than the kingdom.

Moreover, sport is a pillar of Saudi Crown Prince Mohammed bin Salman’s Vision 2030 plan to diversify the economy and reduce its dependence on oil exports.

Mr. Ronaldo had barely set foot on Saudi soil when state-owned Saudi Sports Company (SSC) said it had won the exclusive broadcast rights for the Portuguese League Cup, better known as the Allianz Cup, across the Middle East and North Africa.

Saudi Arabia expects to win the hosting rights for the AFC 2027 Asian Cup after India, the only other bidder, pulled out of the race.

With the deals, Saudi Arabia appeared to finally achieve, after several false starts, its goal of becoming a sports broadcasting powerhouse. The Saudi sports ministry founded SSC in 2020.

Initially, Saudi Arabia attempted in 2017 to create a sports broadcasting rights company that would compete with beIN, a Qatar-owned channel that has invested some US$15 billion in securing the rights to broadcast top European football and other sports for the Middle East.

The failed attempt was part of a 3.5-year-long Saudi-United Arab Emirates-led economic and diplomatic boycott of Qatar that, in part, aimed to end the Gulf state’s status as a regional broadcasting powerhouse with the Al Jazeera television network and beIN as the drivers.

When the effort to create a company floundered, Saudi Arabia set up beoutQ, a pirate television network that broadcasted events for which the Qatari channel held exclusive regional rights.

The pirating served to give Saudis renewed access to sports events from which they were cut off when the kingdom banned beIN as part of the boycott. The boycott was lifted in January 2021.

In October, beIN chose SMC MC, a Saudi media company with close ties to the government, as its exclusive advertising partner in the Middle East and North Africa in a deal reportedly worth US$150 million.

“Ronaldo is the biggest star and the biggest story on the planet. It is an industry of its own, and as such, it deserves its own full-time correspondent. His move to Saudi Arabia keeps Arab soccer firmly on the global stage, and the successful applicant will play a pivotal part in this unfolding story,” the magazine’s ad said.

That will likely please Ronaldo fans but not human rights and other activists.

In a statement, Amnesty International, quoting Dana Ahmed, one of its Middle East researchers, called on Mr. Ronaldo to “use his considerable public platform to draw attention to human rights issues in the country… Cristiano Ronaldo shouldn’t allow his fame and celebrity status to become a tool of Saudi sportswashing.”

Meek in comparison to the criticism for rights violations heaped on Qatar in the runup to last month’s World Cup, the statement had a Johnny-come-lately feel to it. Mr. Ronaldo’s move to Saudi Arabia has been public knowledge for weeks.

Amnesty may have wanted to wait and see whether Mr. Ronaldo would speak out about human rights when he landed in the kingdom, even though there were no grounds to believe that the player would endanger his position as the world’s highest-paid footballer.

Mr. Ronaldo made that clear on his arrival.

“I want to give a different vision of this country and football. This is why I took this opportunity. I am coming here to win, play, enjoy and be part of the success of the country and the culture of the country,” Mr. Ronaldo said at a news conference in which journalists were reduced to passive listeners as he only answered questions from the master of ceremonies.