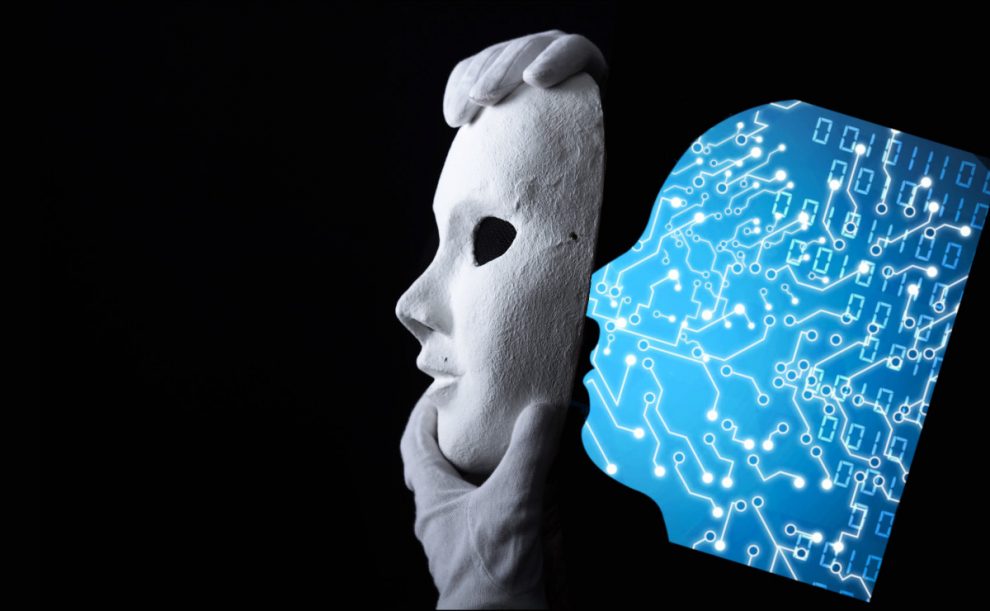 This Facebook profile captured my attention due its frequent postings about robotics. The apparent owner is Mr. İsmail Hakkı Bafralı. I don’t know who this person is or even a real person. 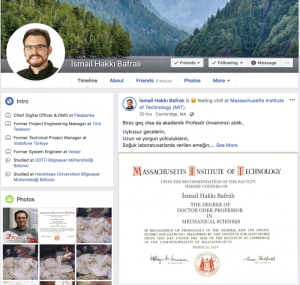 His most recent posting (26 March 2019) was a “diploma” – the picture of a document supposedly given to him by MIT which had several significant errors in it:

Another posting claims an Award given to hom at the ASME 39th Mechanism and Robotics Conference. This was posted in February 26, 2019, as if it is a new award.

However, the ASME 39th Mechanism and Robotics Conference was held in 2015.

Also, there is mention of the name “Bafrali” or “Bafralı” in the Conference proceedings:

On February 22, 2019, Mr. Bafralı posted a robot picture, being worked on an experiment station, seemingly in a lab space. He calls it “Our first robot anthropomorphic (human) roboy”, I am interpreting this as he is developing the robot:

However, this is a robot developed by Boston Dynamics Company. See 1:35 in YouTube page Darpa PetMan Robot: https://www.youtube.com/watch?v=5S4ZPvr6ry4

****
In a February 19 posting, Mr. Bafralı claims he is working on another robot.

But this is the well-known MIT Hermes robot: https://biomimetics.mit.edu/research/mit-hermes-project

Mr. Bafralı is definitely not one of the developers of the Hermes Robot at MIT. All former and current members of the MIT Biomimetic Robotics Lab are here: https://biomimetics.mit.edu/people

****
In yet another posting, he claims to have received the Best Paper Award in IEEE RCAR 2019 (2019 IEEE International Conference on Real-time Computing and Robotics) held in March 20-21, 2019 in Okinawa, Japan.

But, IEEE RCAR 2017 was held in July 14-18, 2017 in Okinawa, Japan. Furthermore, a paper with the above title (that he claims to have won the Best Paper Award) exists in RCAR 2017: http://ieeexplore.ieee.org/stamp/stamp.jsp?tp=&arnumber=8311827 ==>> Real-time curvature estimation of printable soft gripper using electro-conductive yarnt. But the authors of this paper are Takahiro Matsuno, Zhongkui Wang and Shinichi Hirai.

In summary: He takes a paper title from RCAR 2017 proceedings that has 3 Japanese authors, and photoshops a Best Paper Award certificate from RCAR 2019 with his name on it!!

****
In another but more disturbing posting in March 9, 2019, Mr. Bafralı claims he is in the Turkish Presidential Compound signing a project about “developing robot soldiers”

However, this is just a stock photo used many different sites:

I certainly hope, Turkish Government does not take this person seriously.

****
Mr. Bafralı also posted that he was thanked by a well-known private Turkish university to have given a seminar on “Robotik Bilim Projeleri ve Akıllı Robot Yazılımının Geliştirilmesi” (The English title “Robotic Science Projects and Developing Smart Robot Software” is rather incongruous)

****
Mr. İsmail Hakkı Bafralı has no Google Scholar records of any conference or journal articles at all since 2015:

****
I wonder what we are dealing with here. Mr. Bafralı is putting a lot of efforts to generate forged documents, forged diplomas, and photoshopped pictures. I wonder if he is really benefiting from these efforts somehow.

Is he a scientific fraudster or a just pathological liar?
I am leaning to the latter.

Turkey’s Policy in the Balkans: More than Neo-Ottomanism
How Durable are Relations Between Turkey and Russia?
Comment