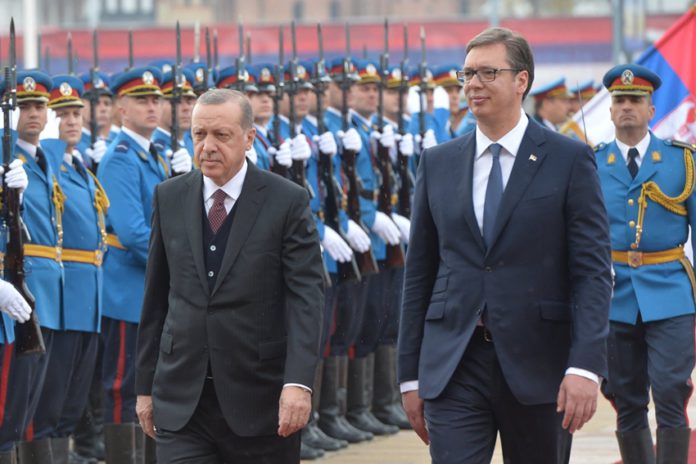 I had the opportunity to follow President Recep Tayyip Erdoğan’s three-day visit to Ukraine and Serbia. A series of agreements between Turkey and Ukraine, addressing key issues like joint engine production and the defense industry, was signed during the visit.

As always, Erdoğan advocated for the rights of Crimean Turks and reiterated his support for them. On the same day, Moscow welcomed the representatives of the PKK-affiliated People’s Protection Units (YPG), in an attempt to convey a counter message in its own way.

Following his Ukraine visit, Erdoğan arrived in Serbia. He was welcomed by President Aleksandar Vucic and his entire cabinet at the airport at midnight and to put it into a Turkish phrase, he was “hosted like kings.”

Vucic is an interesting leader who has gained the support of the majority of people in the country. During his time as prime minister, he had penned a letter to the public about the Srebrenica massacre, saying, “Serbia clearly and unequivocally condemns this terrible crime, abhors those who took part in it and will continue to bring them to justice.”

He later attended the commemoration of the 20th anniversary of the Srebrenica massacre. While he was trying to lay flowers at the Srebrenica memorial, he was assaulted by a group of heartbroken Bosnians. Though Vucic called it an organized attack, he urged Serbs not to show any hatred toward the Bosnians, adding, “My arms remain open and I will continue with my policy of reconciliation.”

Interestingly, Vucic was not a “bystander” who watched the massacre of Bosnians. He was a young and ultra-nationalist politician who served as the information minister under former President Slobodan Milosevic. The Bosnians have also not forgotten his remark, “For every Serb killed we will kill 100 Muslims,” in a parliamentary speech.

In 2008, however, he joined the liberal party, claiming he wanted to break away from his past and said, “Only donkeys don’t change.”

Aware of the hatred and mixed feelings, Vucic, during his meeting with Erdoğan in Novi Pazar, said that he knew he was “not going to be welcomed here like Erdoğan,” but promised to continue working for the good of the city and Serbia.

Novi Pazar has the highest number of Muslim population in Serbia; around 85 percent of its inhabitants are Muslims. Not only the Serbs but also Bosnians want Erdoğan to develop good relations with Serbia. Because only through cooperation with neighboring countries can the region recover from the division caused by the war and bring welfare to people.

To that end, Turkey’s role and mediation in the communication between Belgrade and Bosnia-Herzegovina are of great importance.

The Russian hegemony is very clear in Serbia, but there is also an ongoing competition with Germany. While the United Arab Emirates ranks first among the Muslim countries that invest the most in the region. It is followed by Azerbaijan and Turkey.

The fact that Turkey’s state-owned Halkbank operates 35 branches in Serbia proves the growing Turkish influence in the country.

With President Erdoğan’s visit to Serbia, Turkey, one of Bosnia’s biggest allies, has contributed towards a more peaceful environment in the Balkans.

*This article first appeared at Daily Sabah in 14 October 2017

The underlying reasons for Turkey’s disengagement from the US and the West
U.S. in grave danger of losing friendship, influence in Turkey
Comment