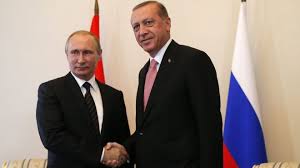 The Turkish media is reporting that a staffer at the American consulate general in Istanbul was recently arrested under the serious charge of attempting the “destruction of the constitutional order,” “espionage,” and seeking “to overthrow the government.”

To be specific, ties have been uncovered between the man under arrest and some prominent members of Fethullah Gülen’s movement (FETÖ), which is banned in Turkey. Previous accusations had been made against General Joseph Votel, the commander of US CENTCOM and an expert in covert operations, alleging that he had cooperated with the conspirators who attempted a military coup in Turkey in July 2016.

And this is only the tip of a very cold and growing iceberg that has gradually been disrupting the relationship between these formerly close allies – the US and Turkey. Not even President Erdoğan’s visit to the US this year could buck these trends.

Observing that relations between the two countries have been deteriorating for more than a decade, US columnists, for example – Tom Rogan of the Washington Examiner – reflexively sum it all up as evidence of the deleterious influence of Vladimir Putin. In his assessment of the most recent meeting between the Russian and Turkish presidents in Ankara, that journalist points to the fact that Recep Erdoğan called Vladimir Putin “my dear friend” and even “stroked his ego” by speaking to him – horror of horrors! – “in Russian,” as though that were a crime.

CNBC also notes that Recep Tayyip Erdoğan and Vladimir Putin “share a general suspicion and mistrust of the US.” It seems, however, that the reasons for Turkey’s growing frustration with its efforts to cooperate with its Western partners, including the United States, run deeper. According to the Huffington Post, Ankara realized several years ago that neither the US nor influential NATO members such as Germany, France, and Britain take Turkey’s security concerns or economic interests seriously. As a result, Ankara decided to go it alone and began “wooing” Russia militarily and Iran economically.

The joint study produced not so long ago by the Turkish Foreign Ministry’s Center for Strategic Research and America’s CSIS, which reviews relations between Ankara and Washington, did not anticipate anything of this nature. The “Arab Spring” had just begun, and few people correctly surmised how that would unfold. Moreover, the study proclaimed that the two countries’ “partnership has recently been enhanced by overlapping perspectives on the unprecedented transformation sweeping the Middle East.” But nothing quite worked out that way.

At that time the foundations for the strategic alliance between the US and Turkey were seen as: close cooperation on issues related to the “Arab spring”; a Turkish role in the NATO mission in Afghanistan; Turkey’s decision to join the NATO missile-defense program; and American assistance with Turkey’s military operations against the Kurdistan Workers’ Party (PKK).

All these elements of their “bilateral rapport” have now turned into factors of their alienation. For example, the Turkish government considers the US government to be fully to blame for the failure of the “Arab spring,” a stance that it takes, apparently, in part in order to sidestep criticism from its own citizens. In any event, there is now no serious cooperation between Ankara and Washington to speak of. Each acts at its own risk and peril. Turkey’s presence in Afghanistan was long ago reduced to a purely symbolic role. And Turkey’s potential purchase of the Russian S-400 system is indicative of more than merely Ankara’s shift toward non-NATO weapons – it is a consequence of the country’s de facto refusal to participate in the NATO program to create a joint missile-defense shield. The S-400 is a missile interceptor that is quite powerful enough to allow Turkey to autonomously defend its own territory.

And there’s a good reason this deal is so irritating to Washington and Brussels. Due to the oscillations of American policy in Syria, the local branch of the PKK – the Kurdish Democratic Union Party (PYD) – has suddenly become the US administration’s main bedrock of support there. And this is perhaps the biggest irritant for the Turks. Suffice it to say that the Americans failed to meet their obligation to move the Kurds east of the Euphrates River and out of Manbij and Tabqa. The promise they made to Ankara to disarm the Kurds after the defeat of IS has also been unabashedly left hanging. The Turks deeply dislike being deceived. There is an ever-growing possibility that the US and Turkey, which are “NATO allies,” will become embroiled in an indirect armed conflict (!) through their “proxies” from the pro-Turkish FSA and the pro-American SDF.

Surveys conducted in Turkey by the American Pew Research Center show that 72% of Turks consider the US to be a threat to their country’s security. This is a world record, hands down. Few in Turkey were swayed by Washington’s refusal to formally support the referendum in Iraqi Kurdistan. They don’t think that the Iraqi Kurds would have risked a referendum at all without the Americans’ tacit consent. It is noteworthy that not only Erdoğan, but also pro-opposition Turkish nationalists are highly critical of the US Kurdish policy. They believe that by flirting with the Kurds, Washington is pursuing a long-term strategy to create a “second Israel” in the Middle East. They are particularly irritated by the inclusion of oil-rich Kirkuk – which they traditionally view as a Turkmen city – within the zone of the referendum.

One might ask: how enduring are these changes that have been seen in the relationship between the two countries and in the sentiments of the Turkish public? Might they be scrapped once the next generation of politicians gets into office? But it appears rather to be a manifestation of deep-seated patterns of behavior. The post-war threats to Turkey’s security that at one time prompted its close integration with Western institutions, including NATO, simply do not exist today. And they are unlikely to reemerge. The real dangers for Turkey all come from a completely different direction – the Middle East. And to a large extent those dangers can be blamed on the actions of Ankara’s Western allies, who, instead of providing security, have become agents of destabilization. Perhaps the discussion today should be more about finding protection from them, not about joint-defense operations with them.

In addition, by abandoning its dream once and for all of joining the European Union – and that issue can be seen as settled, once and for all, on both sides – Turkey must obviously give some thought to its dependence on NATO. Although there is not yet any talk of Ankara’s pulling out of that institution, it is clearly inevitable that Turkey will reject some of the restrictive commitments and rules mandated by the North Atlantic alliance. Those might chiefly involve decisions to use military force that is unsanctioned by NATO. Erdoğan set out to entirely eliminate Turkey’s dependence on defense imports – which includes the goal of launching his country’s own aircraft carrier – by 2023, when Turkey will celebrate the centennial of the founding of its republic.

It’s no secret to anyone that nowadays NATO positions itself as a kind of “introductory class” to prep countries on their path to EU membership. All of Eastern Europe, for example, was forced to pass through this purgatory. It’s no surprise that Austria, Finland, and Sweden, which were early joiners to the European Union, aren’t seriously contemplating becoming NATO members, despite the discussions on this topic that are constantly forced upon them. And as far as Turkey is concerned, without the prospect of joining the EU, that alliance has become too cumbersome and useless.

From the standpoint of Turkey’s real interests, gradual rapprochement with its regional neighbors – Iran, Iraq, Syria, and Russia, as well as with global unions such as the Shanghai Cooperation Organization – may be more promising. Although some might currently view this drift as a mere episode, it is in fact quite a logical development, based on objective criteria and which may well prove to be long-term.

Mr. Dmitry Minin is an independent analyst and researcher

Why do US-Turkish relations deteriorate?
Serbia’s ovation to Turkey
Comment