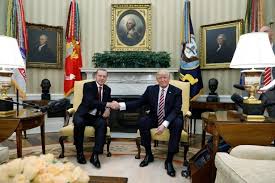 We heard lots of stories about how our ally USA was influential in Turkish state institutions like army and intelligence service, how they were penetrating into most secure cosmic rooms where classified documents were being saved, and how they recruited Turkish citizens and NGOs to spy for them. None of these stories were wrong. Superpower USA had penetrated into cells of the country to keep it on its orbit.

USA, through CIA, has been using  FETO members to locate inside capillaries of Turkey in recent years. It has been very easy to access most secret information for Americans. What they did was to use mediators working for consulate to contact FETO. A call from an American mission to a FETO member was enough to get confidential information regardless of to which ministry it belonged to since FETO had cretated its own network inside the state. FETO allowed Americans to use this network as their interests were overlapping. Fetullah Gulen’s passion and voluntarily being an operative of CIA was another factor. Once he had said “ CIA may think they are getting use of me but the truth is that I am getting use of them”.

However, after failed joup of July 15 2016, everything changed.  FETO and USA made their last attempt, coup d’etat, to overthrow President Erdogan and Ak Party government but it was them who were defeated. Turkey is counter –attacking those who attacked itself without considering the power of opposite side as it is in a state of existence war. It knows that if it can’t clear the body from tumors, the war wold will be lost.

Since the failed coup, bells have been ringing for putschists and their proponents. Turkish security forces first arrested FETO members in continuous contact with American consulate. Aftermath, they arrested those responding to these calls in consulate. It was detention of these intermediators that made US government mad since Turkish state was getting closer to cells of American missions. Americans, for example Ambassador John Bass, knew that next targets would be low rank Americans that got information from FETO. They also estimated that Ambassador would be charged for his involvement in attempted coup finally, an evidence proving that USA was also involved in failed coup.

That is why they suspended visas for Turkish citizens. They aim to preempt upcoming waves and stop Turkish prosecutors at current point. Or else, they know absurdity of punishing Turkey with suspension of visas. They may reissue visas even for the sake of CHP (Republican People Party) which is no different than Trump’s Republican Party in its politics. In other words, they won’t let pro-American Turks get hurt with such bans.

We are all aware that the US government is so much angry. We may think that sheltering FETO leader in Pennsylvania and FETO members in consulate is a crime. Yet, this is not the case for Americans.  FETO is an organization that served American interests both in Turkey and abroad. The only guilty guy for them is President Erdogan.  Mr. Erdogan did not quit after Gezi protests.  He also resisted FETO’s 17-25 December 2013 probe of treason.  He was expected to resign and be judged for pseudo corruption.  When he continued to rule Turkey (with will of people), they attempted a military coup and tried to kill Mr. Erdogan in July 15, 2016.

As per American traditions, if you don’t obey them, you can be overthrown by any means. They used various methods to oust Mr. Erdogan but all failed. Besides, Mr. Erdogan calls to account putschists and their backers. He also distorded US’ divisive plans in Iraq and Syria. USA can’t stand to be intervened and their plans to be disrupted even though they harm another country.  That is why their relations with Turkey are deteriorating. Their expactation was Turkey’s silence on account of USA. Yet, Turkey dared to preserve its interests.

There are two ways before Turkish-US relations. One is that USA will accept not a dependent but independent Turkey. This choice will still enable USA to protect its interests. Second, USA will continue to attack Turkey (in)directly. For sure, Turkey won’t be the loosing party in both choices. It is USA that must choose either choice and calculate likely losses and gains.