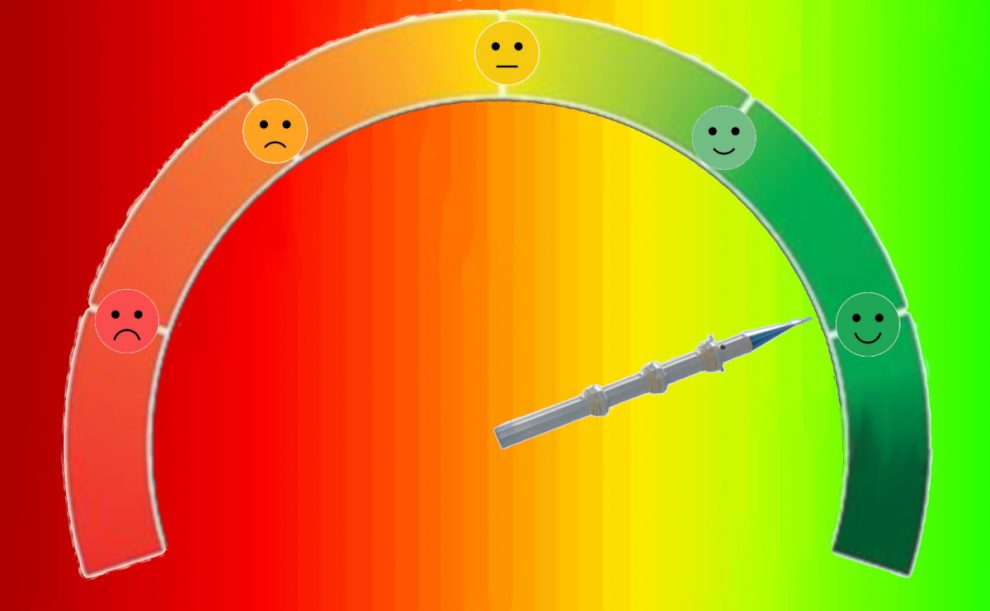 It is believed that no barometer or measuring tool can be used to quantify the bliss a person feels in any given moment in their life. However, a new study conducted by German psychologist, Dr Edinger-Schons, found that measuring life satisfaction is as close as you can get to quantifying happiness. He found that the overarching sense of ‘oneness’ is used to envisage the overall contentment in the life of a person.

Over 67,000 were gathered to complete a survey and after dividing the respondents by religion, Muslims were found to feel the greatest sense of oneness, leading to a greater sense of well-being. [1]

Furthermore, a professor at the University of Illinois created a scale for happiness, or the ‘satisfaction with life scale’ (SWLS).[1] It consisted of five questions in order to determine how satisfied a person is with their life. Each question had a ranking from one to seven, and according to this, the higher the score, the more satisfied you are with your life.

Another survey in 2016 concluded that “highly religious” people are more likely to be ‘very happy’ in life.1 90% of these ‘very happy’ people were Christians; though, now the German psychologist has concluded that the idea of ‘oneness’ is the common denominator that runs through people with a higher level of spirituality in their respective faiths.

Over 67,000 non-students were surveyed by researchers at the University of Mannheim in Germany to determine how ‘oneness’ affected life satisfaction across different religions. Due to the belief that they were connected to something larger than themselves, it was found that Muslims were most likely to be the ones with a higher life satisfaction over other faiths. ‘Oneness’ as a personality marker can be used to distinguish between people who seek and make more meaningful connections with others, the world around them, and the almighty entity of God.

As one of the core beliefs of Christianity is also the worship of One God, they, therefore, ranked second to Muslims, and were followed by Buddhists and Hindus. Unsurprisingly, the study found atheists to be the sect with the lowest level of satisfaction, due to a disconnection to others or a higher power.

In response to the results, Edinger-Schons said:

“I did not find it surprising that atheists have the lowest levels of oneness beliefs in the sample, but what surprised me was that oneness beliefs were actually very different across various religious affiliations, with Muslims having the highest levels.” [2]

Thus, as the core theme of Islam is Tawhīd (monotheism), Muslims feel the greater sense of ‘oneness’, which leads to better mental and physical health outcomes. Though it is unknown to what extent the internal system affects a person’s life satisfaction, it leads to better social connections, a stronger immune system, greater empathy and a decrease in depression.

“This study broadens the knowledge on the psychology of religion, revealing not only the average level of oneness beliefs in the different religious groups but also exploring the effect of these beliefs on life satisfaction while controlling for the effect of religious affiliation.” [3]

What should you do after reading all of the above? Let it affirm your happiness in being a Muslim. Whether you were born Muslim or guided to Islām, the study confirms that being part of the Prophet’s (sall Allāhu ʿalayhi wa sallam) Ummah, as well as our Islamic adherence, increases our general life satisfaction.

“One viewpoint suggests that the characteristic that distinguishes Muslims from followers of the other faiths is that Islam’s influence is very clear in every aspect of its adherents’ lives. Islam which is considered a complete way of life by its followers contains an entire socioeconomic system. Accordingly, Islam structures the daily lives of Muslims which requires a balanced satisfaction of both the material and spiritual needs.” [4]

Despite being the most attacked religion of all time and despite it being Muslim countries that are routinely invaded, with its people hospitalised and victimised due to wars and imperialism, we have the least suicides and depressions, while the materially safer and richer have the highest numbers of suicides and depression. [5]

So be proud that you are a Muslim; raise your head high with your Islamic attire, with your ‘backwards’ way of life. Look at how people who routinely attack Islām based on speculative and often outright false grounds are often arrogant and proud of their inherited falsehoods. Yet, Muslims are worthier of this pride, worthier of this happiness that Allāh has guided us to Islām. But it comes with great responsibility as well.

What to do in post-pandemic economic crisis

Use of Racism In 5th Generation Warfare & Countermeasures

Two women poking the beehive in US politics
Turkey’s Policy in the Balkans: More than Neo-Ottomanism
Comment