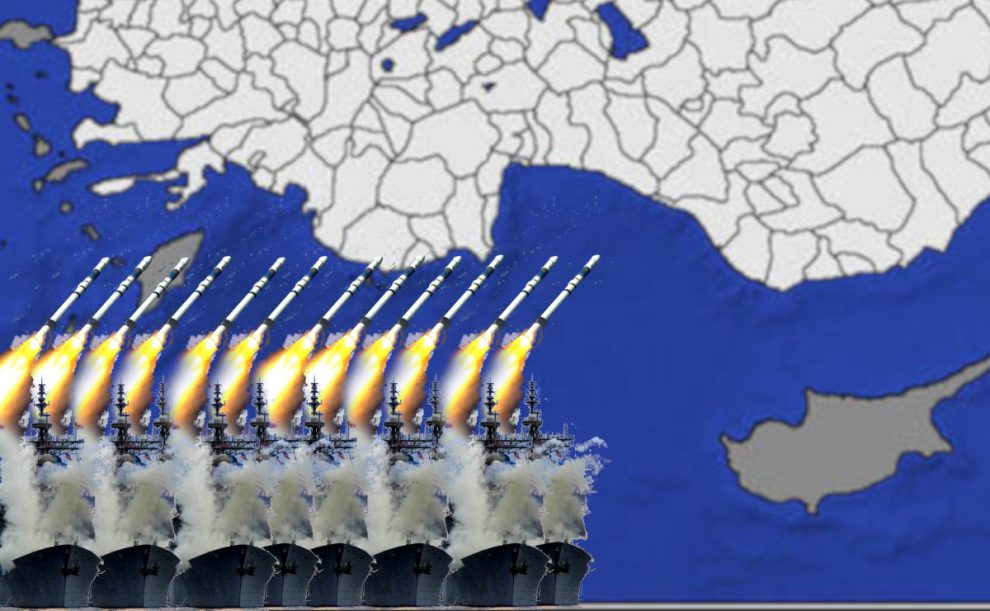 (Greek) Cyprus, which is not recognized by Turkey, is nowadays doing its best  to escalate the situation in the Eastern Mediterranean region. While the rift stems from drilling for natural gas in the sea, the source of the problem goes back to 1974 when Turkey intervened the island in order to stop the slaughter of Turkish minority. Turks live in northern side safely thanks Turkish army’s presence and protection since then.

There have been many negotiations to bring the two ethnic groups together under a single state. However, since Cyprus became an EU member in 2004, no progress has been witnessed. Unfortunately, Cypriots rely on EU support against Turkish Cypriots and Turkey. When the best solution project, Annan Plan, was voted in 2004, while Greek Cypriots rejected the plan, Turkish Cypriots accepted it. Despite that Greek Cypriots refused any permanent solutions for the future of the island, they were always awarded by their Western allies.

The current contention in the Eastern Mediterranean is again a result of Greek side’s saucy and opportunist policies. Greek Cypriots have made agreements with oil companies of Western countries and co-act with their sea neighbors like Israel and Egypt, with which Turkey has trouble relations. Greek Cypriots now try to usurp the share of Turkish Cypriots in extracted gas by partnering with great powers. Turkey has called them many times to accept that Turkish islanders have a share in gas revenues. However, Turkey’s calls were always denied.

On the other hand, the EU, which accepted Greek Cyprus’ membership to the Union without a permanent solution that would satisfy both groups, sided with its member by ignoring Turkish Cypriots’ rights. As known, they do not recognize Turkish Republic of Northern Cyprus (TRNC). However, there exists a population and a territory that comprises 36,5 % of the island. When Greek side extracts gas and generates revenues from it, Turkish side will not benefit from it. Whereas, revenues belong to all residents of the island.

As a response to unfair actions of Greek side that are backed by the EU, the US, Greece and other countries, Turkey started drilling together with TRNC. Turks have two drilling ships in the region at the moment. The reaction of Greek islanders and their supporters was quick, illogical, baseless and threatening. They argue that Turkey is violating exclusive economic zone (EEZ) of Greek Cyprus. On the other hand, Turkey responds that it is drilling in its own EEZ and that of TRNC.

In fact, Turkey is forced to implement counter-actions due to Greek Cypriots’ illegal agreements and negligence of Turkish Cypriots. In addition, Turkey may find itself squeezed to its shores if it just watches the extortion of its and TRNC’s EEZs. Turkey and TRNC also feel disappointed since Western countries side with Greek Cypriots that rejected all rational solutions for the island. Therefore, they do not accept a fait accompli situation.

What is more, the presence of other countries as partners of Greek side in the East Mediterranean disrupts Turkey’s relations with them, which are already at low level. In case, warships of any partners or supporters interfere Turkish ships and cause damage or casualties, a war will be likely. The situation is so serious. Any small clash has potential to turn into a war. Therefore, supporters of Greek side should avoid escalating tensions and listen to Turkey’s arguments. They should know that the course will end with undesired results.

Why the Eastern Mediterranean is of Strategic Importance for Turkey
Who lost Turkey?
Comment