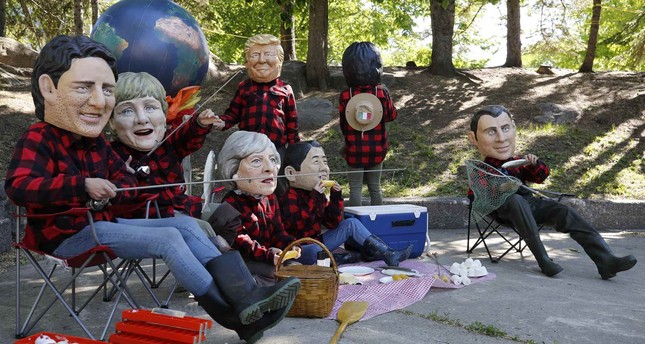 Contrasting pictures came out of this week’s summits by Western and Eastern leaders. Meeting in Qingdao, China, for the 18th Shanghai Cooperation Organization (SCO) summit, the leaders of China, Kazakhstan, Russia, Kyrgyzstan, Tajikistan and Uzbekistan were all smiles. By contrast, G-7 leaders – the United States, Germany, France, Japan, Canada, Italy and the United Kingdom – were unmistakably unhappy in Charlevoix, Canada.

The G-7 was proof that growing tensions between the United States and the European Union were no less important than political and commercial disputes between the U.S. and China or Russia. After all, U.S. President Donald Trump made it clear that the brewing trade war would not be limited to Beijing by imposing steep tariffs on imported steel and aluminum from the European Union, Canada and Mexico.

One of the early signs of the current crisis came in 2015, when the United Kingdom, along with several other Western nations joined the Chinese-led Asian Infrastructure Investment Bank (AIIB). To be clear, U.S. anger didn’t work then, and it isn’t working now.

Mr. Trump’s calls for the readmission of Russia, whose membership was suspended following the invasion and annexation of the Crimean peninsula, wasn’t exactly what G-7 leaders wanted to hear either. As a matter of fact, Western officials see this development as a sign that the new world order, which the Americans created after World War II and strengthened since the disintegration of the Soviet Union, is crumbling.

In recent years, Turkey correctly anticipated the imminent crisis and responded by repairing its strained relations with Russia and building stronger ties with China and Iran. In the absence of unipolar U.S. hegemony and the rules it entails, the Turks reasoned, they had to put their national interests first – which inevitably meant having better relations with neighboring countries and working more closely with the economic powerhouse China.

Needless to say, the U.S. made it easier for Turkey to make such a drastic decision by arming the terrorist organization PKK and harboring Fetullah Gülen, the mastermind behind the 2016 coup attempt in Turkey, despite an outstanding warrant for his arrest.

At the same time, Russian support for Operation Euphrates Shield in 2016 and Operation Olive Branch earlier this year, which Turkey launched against the PKK’s Syrian branch, the People’s Protection Units (YPG), out of national security concerns, factored into Ankara’s calculations.

In the end, Turkey was able to adapt to changing global circumstances as a country that happens to be at the heart of various energy projects and China’s modern Silk Road, also known as the One Belt and One Road initiative.

Today, German state broadcaster ARD, along with many other Western media outlets, accuse Fetullah Gülen of hypocrisy and claim that his organization is extremely dangerous, largely due to Turkey’s new foreign policy approach. As such, there is no doubt in my mind that the same governments are closely following the upcoming presidential election, which pollsters overwhelmingly predict will result in a first-round victory for incumbent Recep Tayyip Erdoğan.