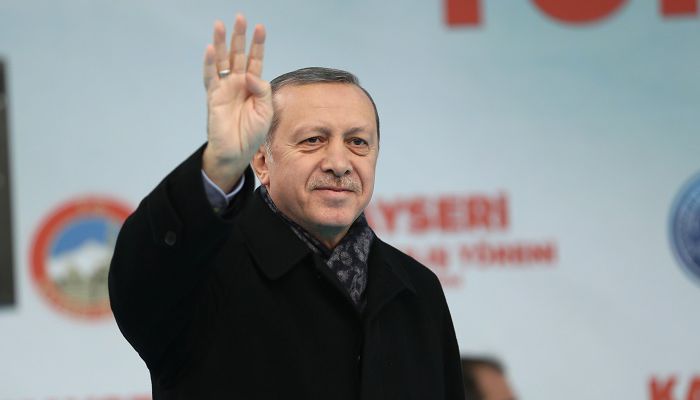 President Erdogan is unfairly maligned in the mainstream media. He’s constantly accused of cracking down on freedom of speech, of arresting journalists and of pushing forward with an “islamist” agenda.

Some have gone even further by comparing him to Hitler – on the one hand, you have a brutal dictator responsible for the genocide of at least 5.5 million Jews and on the other you have a President who welcomed 3.1 million Syrian refugees to Turkey.[*] These outrageous comparisons, besides being insensitive and malicious are rather comical but this is the extent of the smear campaign employed against President Erdogan.

Despite this smear campaign and what you may have heard about him, he enjoys widespread popularity in Turkey, he’s so popular in fact that he has won every single election or referendum that he was involved in since 2002.

It’s important to understand both sides of the story and not rely on shady and often ridiculous accusations about him in the mainstream media. Those who write about him or his government do often have ulterior motives. For example Sir Edward Garnier was paid £115,994 by the Gulen movement to author a biased document titled A Report on the Rule of Law and Respect for Human Rights in Turkey.[*]

Erdogan founded the Justice and Development Party or AK Party in 2001 and came to power the following year after winning the elections in November 2002.

Before Erdogan, Turkey was running large budget deficits and borrowing heavily from the International Monetary Fund (IMF). Much was done in an attempt to balance the budget, however this only led to more IMF debt and subsequently the sale of many state-owned industries.

Erdogan took hold of the reins of a country which was in economic and financial ruin. Turkey was on the brink of collapse. Erdogan worked tirelessly with his aides, establishing and implementing a plan for economic stability and growth. They focused on improving the daily socio-economic and health-care problems that troubled many.

Under Erdogan’s leadership the following were achieved:

In 2013 the IMF debt was paid off in full. Today Turkey has the 17th biggest economy in the world – based on GDP rankings. [*]

These are only some of the achievements of Erdogan and his government, which dramatically improved the quality of life in Turkey for all without discrimination but Erdogan didn’t stop there.

Historically Turkey’s conservative population were prevented from practicing their religion. It was unlawful for covered Muslim ladies to attend school or work in the public sector. The staunch secularist governments of the past did not tolerate Islamic practices. Merve Kavakci, who was elected as a member of the parliament, was infamously kicked out of the Turkish Parliament during the swear-in ceremony on May 2, 1999 because she was wearing a headscarf.

Erdogan’s government changed the legislation and reversed the headscarf ban. Ladies were now free to work and attend universities wearing headscarves. He made further changes within the education sector altering the policy regarding penalising those students attending religious secondary education institutions known as Imam Hatips. Under Erdogan’s leadership 17,000 new mosques were built, bringing the total count to almost 87,000 mosques in Turkey.

What Erdogan did was give a voice to the silent majority, also known as ‘black’ Turks who had been oppressed by the staunch secularists and had not enjoyed the freedom to practice their religion nor to speak their minds openly since the time of the Ottoman Sultans.

It is no wonder why then that AK Party has won every single election held to date (elections held in June 2015 resulted in a hung parliament but AK Party was again successful in the subsequent November 2015 election).

It’s worth noting that these achievements were realised despite the many unexpected events that unfolded and shook up the country, negatively affecting the economy. There have been organised riots like that of the Gezi riots in 2013 designed to topple a democratically elected government; many terrorist attacks by PKK, DHCP/K, ISIS and a military coup attempt in 2016.

Again, it’s quite interesting how these events are reported in the mainstream media. Somehow blame is attributed to Erdogan and his policies whenever there’s a terrorist attack in Turkey; the vile acts of these terrorists or of the agitators involved are glossed over.[*][*] By the same token, any success that Turkey enjoys is either ignored, misrepresented or it’s attributed to anyone but Erdogan. This is further proof of the smear campaign employed against President Erdogan.

Many of his followers in Turkey will openly claim that there’s a conspiracy against him. In cafes Turkish folk tell tales of the Turkish aviation industry and of the Turkish car industry and how these were sabotaged and suppressed because an independent Turkey would pose a risk to the West. They talk about how the PKK is armed by foreign powers and provoked to attack Turkey (the PKK has been caught with German and American manufactured weapons.[*] ) They speak of Erdogan’s case being similar to that of Sultan Abdul Hamid II who was dethroned following many riots organised by foreigners; that both Erdogan and Sultan Abdul Hamid II had similar goals, which were to create an independent and a strong country: Turkey would not just become a regional power but it would become a global power.

If these allegations were made anywhere else other than Turkey, you may take them with a grain of salt. However, there may be some merit to these suggestions when you start looking into them. There’s anecdotal and sometimes clear evidence of foreign interference in Turkey. For example, the Action Army which played a major part in dethroning Sultan Abdul Hamid II were organised by foreign entities; the deputies that came to announce Abdul Hamid’s dethronement also had foreign connections.[*] Furthermore Turkey has suffered 5 military coups since the establishment of the Republic of Turkey in 1923!

Erdogan could not be defeated democratically so it seems then that asymmetric warfare was declared against him by his adversaries.

On July 15 2016, Turkey suffered a military coup attempt where 249 people were murdered by the putschists. The Gulen movement orchestrated this coup attempt in an effort to overthrow Erdogan. Luckily the coup attempt failed. Erdogan, using FaceTime connected to a news channel, which was broadcasting live and he asked the Turkish population to rally against the coup plotters. The Turks took heed and came out in droves, literally risking life to thwart the military coup.

This coup attempt vindicated the tough stance Erdogan was taking against the Gulen movement, which had previously tried to manipulate public opinion about him and his government. The Gulen movement, established in 1970s and numbering up to 4 million followers had infiltrated high ranking positions within the state institutions and offices.

Ostensibly Gulen presented a religious persona, which is how he was able to recruit many followers however deep down Gulen had a goal to infiltrate the state institutions and take over the government, encouraging his followers to hide their intentions as they climbed the executive, legal, judicial and military rankings and to lie as and when required to do so. [*]

This movement released doubtful hidden audio recordings that led to the 2013 corruption scandal. In one audio recording purportedly of Erdogan, he’s firstly heard advising his son that they should be careful when speaking over the phone in case it’s tapped, then in the same breath he asks his son to hide the tens of millions of dollars they have stashed away!

Erdogan was accused of being corrupt and to have stolen millions of dollars from the government. This story broke in 2013 and while much attention was given to it in the mainstream media both domestically and internationally, most of the Turks saw it for what it was – an attempt to smear Erdogan. In 2014, Erdogan won the first direct presidency election with a 52% majority.

The coup attempt had failed. A state of emergency was declared. Erdogan’s government cracked down on the coup plotters and everyone associated with the Gulen movement, which was designated a terrorist organisation, labelled FETO. Turkey would now implement a zero-tolerance policy when it came to terrorist organisations and its associates, be it FETO, PKK, DHPK/C or ISIS.

Many FETO associates were arrested and many lost their jobs. As many as 150,000 people were affected. While this number seems astronomical, when compared with the 4 million followers of Gulen, it’s only a fraction of the total – that isn’t to say that every member is guilty of a crime of course.

The investigations revealed the extent of Gulen movement’s criminal activities. FETO was found to have cooperated with other terrorist organisations like PKK and ISIS. [*]

These reports have been either ignored or dismissed as untrue in the mainstream media. Instead the media has focused on criticising Erdogan for supposedly suppressing freedom of speech by jailing journalists.

At the moment there are 149 journalists in jail in Turkey. It needs to be noted however that those arrested haven’t been arrested for their journalistic prowess, it is alleged that the majority have connections with a terrorist organisation. For example, here are some of the reasons why these journalists have been arrested: [*]

And the list goes on. I can’t speak about every case however it can be seen from the quoted list above that these individuals may be journalists by profession but allegedly they have been involved in criminal activities and journalism is merely a front.

When you scratch the surface and look at Erdogan up close, what you see is a patriot who has sacrificed so much and has risked his life in defence of Turkey. Regardless of what they may say about him in the tabloids, he’s worked hard to improve Turkey’s standing in the world. Turkey now has a strong economy, a formidable army and the prospect of even a greater future.

Erdogan is genuinely concerned about the welfare of not just Turks but of the oppressed individuals around the world. He has helped millions of refugees when others rejected even a small group of them. It isn’t much to ask to at least acknowledge the good that Erdogan has done, not just for Turkey but for many victims around the world.