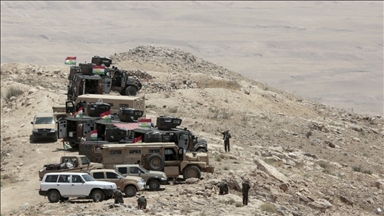 Peshmerga deputy minister appealed to the United States during his late night statement as YPG has been under unconditional protection of Washington. The US government has been arming YPG in Syria on the pretext of defeating ISIS. Terrorist PKK’s sister organization YPG has been trying to gain legitimacy through the global anti-ISIS operations.

It was not immediately clear if any if the sides suffered any casualties during the assault.

PKK had attacked a Peshmerga check point on Sunday and lost 3 fighters. YPG leader Mazloum Kobane has expressed support for the terrorist PKK after the incident blaming Peshmerga for attacking the PKK first. KDP Peshmerga deputy Lezgin said Mazloum’s statements were of that PKK’s.

Iraqi Kurds have been demanding a full withdrawal of terrorist PKK from its territories. Iraqi province Sinjar has been under terrorist PKK’s control. Strategically located Sinjar plays a major lifeline for the PKK as it has been the crosspoint for transferring arms and fighters from Syria into Iraq. Then the terror group launches attacks from there on Turkish and Iraqi targets.

Turkey has been supporting Iraqi Kurds with precise air operations to eradicate PKK from northern Iraq. Several senior PKK members have been murdered by Turkish drone attacks in the past year. Turkish Foreign Minister Mevlut Cavusoglu has said on Tuesday that Ankara would do the best of its ability to destroy PKK in Iraq.

Tagsiraq konane PKK the US YPG