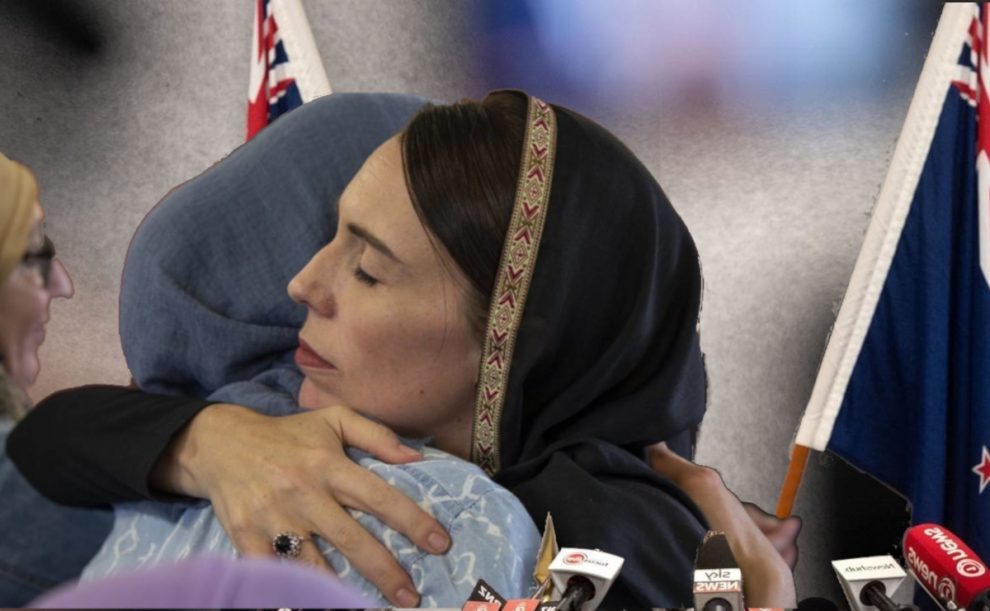 „The person who has committed this violent act has no place here. Many of those affected will be members of our migrant communities – New Zealand is their home – they are us“, wrote New Zealand prime minister Jacinda Ardern on Twitter immediately after the attacks against two mosques in Ōtautahi (Christchurch).

It was the worst ever peacetime mass killing in New Zealand. Fifty people murdered while at Friday prayers. Dozens injured. Ardern clearly labelled the massacre as terrorism.

A few hours after the attack, Ardern flew to Ōtautahi. Wearing black clothes and a black scarf, she hugged members of the Muslim community at the Phillipstown Community Hub in Ōtautahi, saying she would ensure freedom of religion in New Zealand. „I convey the message of love and support on behalf of New Zealand to all of you,“ she said.

Arden also visited the local hospital later that day. The majority of victims were migrants or refugees from countries such as Pakistan, India, Malaysia, Indonesia, Turkey, Somalia and Afghanistan. Muslims account for just over 1 percent of New Zealand’s population.

“You may have chosen us,” said Ardern, referring to the perpetrator Brenton Tarrant, anger in her voice. “But we utterly reject and condemn you.” Staying hand in hand with those affected, Ardern’s focus was on grieving and commiserating with the affected community. Terrorist Tarrant was not representative of New Zealanders’ values and beliefs, she said. Quite simply he was: “not us”.

On March 17, Ardern also visited a makeshift memorial at the Kilbirnie Mosque. She layed down flowers at the „Wellington Islamic Centre“. Te Whanganui-a-Tara (Wellington) is the capital city of New Zealand.

„I can tell you one thing right now, our gun laws will change,“ Ardern said on March 16 considering a ban on semi-automatic weapons. There are an estimated 1.5 million firearms in New Zealand, which has a population of only five million, but the country has had low levels of gun violence. Ardern said that her government will announce plans „within 10 days of this horrific act of terrorism“ that she believes will make „our community safer.“

Ardern indicated she had the support of deputy prime minister Peters for the changes, despite previous strong opposition from Peters‘ nationalist party „New Zealand First“ (NZ First) on the issue of tighter gun control.

Ardern is acting against a powerful New Zealand gun lobby. Indeed, she is a strong woman beyond being a real leader dealing with the worst terrorism attack in the nation’s modern history.

In September 2018, Ardern brought her 3-month-old daughter Neve Te Aroha to the UN’s General Assembly. It was her debut speech at the United Nations in New York. „I’m a mother, not a superwoman“, Ardern told the BBC in January 2019 about having a newborn baby works „beautifully“ with her role in politics.

Ardern is only the second elected leader in modern history to give birth while in office. The first such leader – is Pakistan’s late two-time Prime Minister Benazir Bhutto. Today the world is watching Jacinda Ardern. A remarkable woman, mother and leader. She just became 38 years old. After the fatale terror attack, she is doing everything to unify her country. Ardern keeps on spreading the message of national unity over and over again: This is an attack to the Muslim community and to us all as a country. Don’t let hatred divide us.