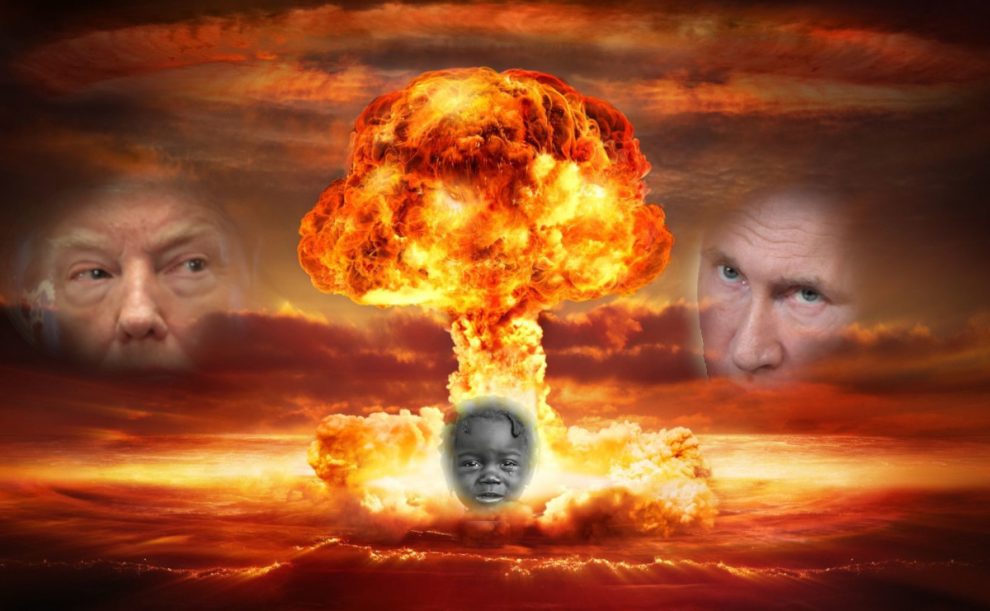 Russian President Vladimir Putin’s response to reports that the U.S. would deploy short-range missiles has strong warnings about how they could counter this move.

Those missiles, Putin estimates, could reach Moscow in 10 minutes and he considers this “a very serious threat.” He declared in his response in English, “In this case, we will be forced – I repeat – forced to take tit-for-tat steps.”

Now, read this warning with another piece of news from the Truthout.org website. According to the Truthout report, the National Nuclear Security Administration (NNSA), the U.S. federal agency responsible for the military application of nuclear science, announced that the first of a new generation of strategic nuclear weapons had rolled off the assembly line. It is smaller in size and power; it will yield “only” about one-third of the power of the bomb the U.S. had dropped on Hiroshima on Aug. 6, 1945. In one day, 145,000 people were killed in Hiroshima. So, this “small” bomb, that is officially designated as the W76-2, could kill approximately 50,000 people.

A smaller missile and a smaller bomb, according to the group known as the Union of Concerned Scientists, are actually more dangerous than those monster nuclear weapons, for they kill fewer people. No, there is no contradiction in this evaluation. What precluded the use of the big bombs by both sides was the fear that mutual destruction from both sides’ large atomic weapons would mean the annihilation of civilization. That mutually assured destruction (MAD) theory made a thermonuclear disaster “unthinkable.”

However, Herman Kahn, one of the leading U.S. thinkers on nuclear strategies and the future, said that no peace treaty would provide safety to the Western world in relation to the former Soviet Union. Had Mr Kahn not died in 1983, he would have said the same thing for Russia. He did not believe in treaties but in power. The solution he suggested is that the U.S. should have easy-to-stock and easy-to-use thermonuclear weapons. His infamous motto was: “There are degrees of awfulness.”

If the U.S. is really going to deploy short-range missiles that could reach Moscow in 10 minutes and fire many of them on Russia, and if Russia responds in kind (“tit-for-tat” remember!), we can rest assured humanity and civilization is not going to be annihilated. But many millions of people will die. Alliances will be redefined and borders redrawn. Many new afflictions, ailments and conditions will appear.

Herman Kahn became very famous in 1960 with the publication of his first book, “On Thermonuclear War.” His second book “The Coming Boom,” published just a year before his death, made him infamous enough. His book was denounced by his peers as “a moral tract on mass murder: how to plan it, how to commit it, how to get away with it, how to justify it.” He was asked once if he was optimistic about the future, he replied saying that “He’d rather be called a realist.”

This small bomb, according to the Union of Concerned Scientists, is not a deterrent against another country; it is going to be used. It is designed to be used. Its power is not the equivalent of the roughly 100 kilotons of TNT as the ones that had devastated Hiroshima and Nagasaki, but five kilotons. A practical guy like Trump would like to teach a lesson or two to those who are on his national strategy document as “the enemies of the U.S.” using this rather economic weapon. It would not end capitalism and the financial network as the “big one” would have.

Policy analysts think that the Pentagon would definitely deploy short-range nuclear-capable missiles in Eastern Europe and on islands off the Chinese coast. Watch for the deployment of those small bombs on nuclear submarines around Iran, too.

We are closer to a nuclear war than we would like to believe.