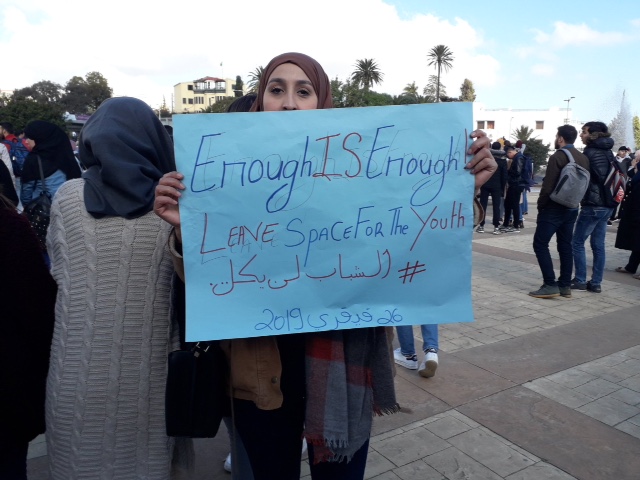 Thousands of Algerians across the country head to the streets, breaking the wall of shame the regime and its acolytes built to silence any opposition voice. Fear is no longer a factor in the narrative of the so-called Presidential alliance, discredited political parties, Labor Union, opportunist business leaders and obeyed Imams’ punch line. A large, spontaneous protest movement born through social media, unexpected and unprecedented in President Bouteflika’s reign, aimed their anger directly at the regime’s men, notably at the Bouteflikas.

Explicitly denouncing the official declaration of the President’s and his entourage run for the fifth-term, a term that the protests called a filthy-term, (al-O‘ohda al-Khamja), rhyming in Arabic with al-Khamsa (fifth). This has been the first rally in three decades since October fifth, 1988, when the young of populous neighborhoods in Algiers manifested their exasperation at the regime. However, this explosion was not a surprise; the analysts who had been following the situation predicted this sociopolitical outpouring for years in spite of the ostrich attitude of the regime.

This time, however, riots did not occur massively; on the contrary, the protests were well organized, people chanting selmia, selmia (peaceful, peaceful), and the anti-riot police had been vigilant dealing with them — it’s hard to manage a law-and-order crisis fueled with political anti-sentiment from the masses. Hence the appearance of the usual suspect characters of Algeria’s noir political series. 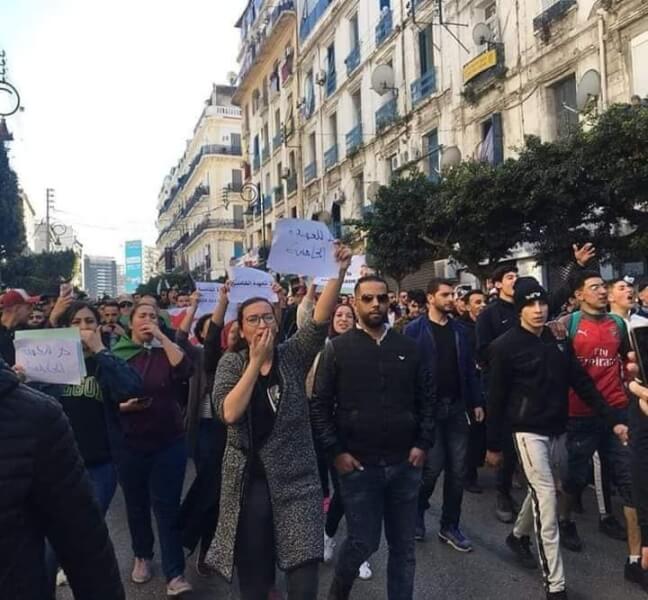 What made the country’s Police-Chief who was appointed a few days before the protests not stop the protests on Friday as he did on Sunday and Tuesday? Was it a message from one of the regime’s side players or the anti-riot police commanders on the field who didn’t want to clash with the protesters? Why didn’t the private “independent” media cover the protests? The next day, they appeared like Monday quarter-back experts. Why did the State media apply the “radio silence” policy? Though the official Algerian Press Agency (APS) mentioned it in a timid communiqué, and on Tuesday’s communiqué used the phrase the outgoing President!

The answers will be gotten in the coming weeks.

This political cri-de-coeur was a societal contest, thus the extension of decades of frustration and social and fiscal injustice by other means. It seems the regime’s lackeys did not get it yet or do not want to get it. They are in a state of denial, i.e, FLN/RND, TAJ, MPA., but the February 22 & 26, 2019 protests like the October ‘88 riots has unveiled the mask of the regime and its failures.

Two decades of President Bouteflika’s presidency and the country is still facing the same old social challenges: education, jobs, decent housing, healthcare and medicare and chronic despair. Though the President’s pros are arguing tooth and nail to stress the President’s achievements, yet insist he still needs five more years to ultimately make Algeria a better country and a pivotal regional power State.

An entire generation has been traumatized and sacrificed, left without any hope. A generation that has known only President Bouteflika and heard only of Saïd, a large majority who still prefers to be eaten by Mediterranean fish rather than be fooled. In this stance, their protests spark concerns across the broad waters in France.

Nonetheless, this time the young of this generation are fighting on their behalf and not serving as pawns in a proxy political fight, as they did in the aftermath of October ‘88. Their message is clear to the Swiss cheese opposition and the Mortadella private media, particularly the Labor Union direction and its reckless General Secretary, the velvet liberal elite, the lost-in-action Islamists, and the cocktail Presidential alliance. At present, the regime’s loyal are showing assurance, but less confidence that everything is under control, even though the clock is not ticking in their favor.

A faction in the military is looking for a plan B for the President’s fifth-term candidacy — according to Mondeafrique an online paper specializing in the African beltway politics; voices are in the military whispering to General Gaïd Salah as Defense Vice-Minister and Army Chief of Staff to invoke Article 102-1 of the Constitution. Sort of a soft coup à la Chadli Bendjeddid. For the moment General Gaïd Salah is acting like a loyal Ağa; the regime’s henchmen, however, have been using MENA’s regional chaos argument to cover their failed policies and management — but on Friday, and Tuesday thousands of angry protesters chanted: “People don’t want Bouteflika or Saïd” (a-Cha’ab, la yooreed Bouteflika, oua a-Saïd), “Bouteflika, leave!” (dégage). This same slogan had been used against Ben Ali and Mubarak in 2011.

After decades of emptiness Algerians are tired of voting, feeling betrayed at every election level locally and nationally, hoping for a more prosperous life, but always disappointed. Still, the regime’s answers are the same, Algeria is well off under the ruling of President Bouteflika, more secure and stable. Yet they did so under this new version of an old political deal between the military institution, the finance clique, and the President’s clan. Meanwhile, people still wait for the longed-for social contract.

As a figure of the regime’s old-guard, Algerians view the President with scepticism and pity, seeing this interminable fight as more about the recidivism of the ideas of the monist society of the 70’s and 80’s in lieu of establishing ambitious and realizable socioeconomic and political reforms. The President insisted in a long letter declaring his candidacy for the fifth-term that he will call for a national conference to tackle all these legitimate demands of the people.

To the people, nevertheless, President Bouteflika’s twenty-years of honeymoon is over — he must step down and retire. In this context, the country is on the eve of an important political test that drives the observers to wonder about the country’s future. The country is exhausted and divided as a whole, despite social depression, political impasse, and national security threats on its southern borders. The people whether in Algiers or in Adrar are feeling proud of their heart’s cry and anger against the Bouteflika dynasty and Premier Ouyahia, not excited though by the breeze of radical change that imploded the regime in October 88.

This is due largely to the popularity of the President among a large segment of the voters in populist and regional Algeria — this exception stems from the bloody fighting that occurred in the 90’s, and President Bouteflika’s “divide and reign” policy in his first and second terms of the intermediate political bodies that re-legitimated and enhanced the regime’s institutions and machine. He resurrected the FLN Party and its base after losing the “liberation war” legitimacy in 1988, but now the regime has found a new ruling imperative, the “war on terror” legitimacy, post-January, ’92 coup and internationally post-9/11 era.

But the Friday and Tuesday, protests also stirred a severe earthquake under the regime’s throne about its legitimacy. The peaceful and civilized nature of the protests have encouraged many to manifest their opposition to President Bouteflika’s fifth-term, including State public journalists, university professors, Order of Attorneys, university and High School students, and a former President, Lamine Zeroual, even high ranking military and police, high public servants in public administration, according to anonymous source told The ADN, marking the April Presidential election’s parameters, and all options are on the table.

For the people, it’s the “too much” term, and the sky’s the limit to their patience, like the goods’ and deeds’ prices at the boiled market and stores. Algerians are scrupulously suspicious of the number five (al-Khamsa) or Fatma’s hand. Generally, it is a symbol of protection and the number five plays a positive role; however there is a phrase in local political terms when five is suspect, referring to a non-conventional social contract with their mayors — “khamsa lea, oo khamsa leekoum” — (five for me, and five for you).

So, President Bouteflika has been saying this every five years. Though, his first-term was for the military, the second was for himself, the third was for his clan, the fourth was for his medical bills, and the fifth, is for his people, but the people are saying: thanks, but no thanks, we want stability, respect and dignity, unlike your minions who want continuity.