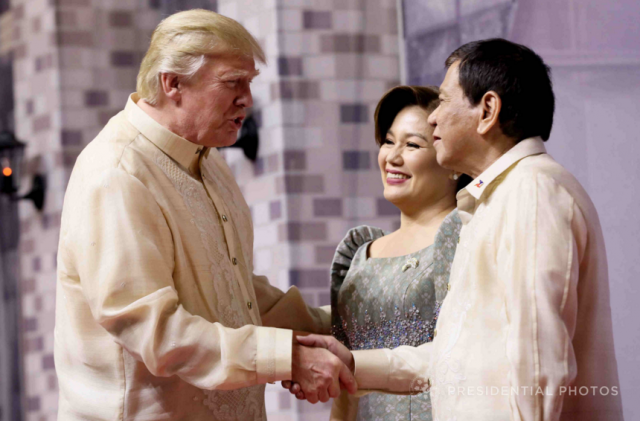 The meeting between the Philippine and U.S. presidents was striking as the Association of Southeast Asian Nations (ASEAN) summit was completely silent on Rohingya. Because of that silence Al Jazeera Television depicted the summit as “an absolute travesty.”

We have to go back and remind ourselves about what President Rodrigo Duterte had said about the man he hosted so cheerfully to appreciate exactly what a regular travesty is. Senior Rodrigo would be happy to kill three million drug dealers as Hitler killed millions of Jews. Literally. “At least Germany had Hitler. The Philippines has not,” he said. Verbatim. The only thing he got wrong was the number Hitler murdered. (The correct figure would be more like 6 million).

Duterte, during a territorial claim dispute with China, said he was going to build close ties with his country’s most powerful ally, the United States. However, right before his meeting with the former U.S. President Barack Obama, he said Obama was “a son of a whore.” He was responding to a question about whether the U.S. president would challenge him on human rights issues. Blissfully, Duterte saved himself from discussing the human rights subject with Obama, who canceled the meeting.

During many other occasions, Duterte has shown his dislike of the human rights issues. When the EU urged him to investigate human rights abuses, Mr. Duterte’s response was so off-color that we cannot repeat it here. While he made such comments, his middle finger was up in the air. He said France and England, whose ancestors had killed thousands of Arabs, were not in a position to lecture him on human rights issues.

At another point, the U.N. committees announced that drug killings had amounted to “a crime under international law,” he responded with expletives and threatened to pull out of the U.N. He did not, of course, pull out of anything.

When asked what he says about his resemblance to Donald Trump in making fiery speeches, Duterte said, “He is a bigot and I am not.” He of course rejected the idea that he looked like Trump; and said Trump looked like him. (This is indicative of the major problem with people with narcissistic personality disorder, by the way.) Because of his inflammatory remarks, the Philippine people call him “Duterte Harry.”

Rodrigo finds Trump “too mild towards Islam.” Consequently, he himself did nothing to restart the stalled peace process with “Islamist rebels” in the Philippines. When he was a candidate, he promised to address injustices committed against Muslims in the country.

This man got together with Trump in a bilateral meeting during U.S. president’s Asia tour. He had Trump chuckling when he called all journalists spies. Perhaps to suppress a possible criticism of this laughter, the White House spokesperson said the president lectured him about human rights abuses in the Philippines. However, Duterte’s spokesman told reporters that “human rights [issue] did not arise” during the meeting.

This is your typical travesty in international relations today. You call a leader a bigot, and his predecessor an “SOB,” yet you sit down and engage in discussions about subjects that you do not even agree occurred. But there must be certain issues that humanity should have lines about that no one should violate.

If the U.N. and the EU are calling the regional leaders to act immediately about the tragedy unfolding in Rohingya, and even the British newspapers started defending the idea to take away Aung San Suu Kyi’s Nobel peace prize over Myanmar crisis, at the ASEAN summit that tragedy should have been addressed. During the two days of the ASEAN summit, leaders said nothing about the most important issue affecting their region. Myanmar’s handling of the Rohingya crisis did not even come up.

In what Al Jazeera called an absolute travesty, Duterte, this year’s chairman of the ASEAN, has shaken the bloody hands of Suu Kyi. He might have not even noticed it because his own hands have the blood of thousands of people who were killed in the name of a “drug war.”

As the Filipino people say, a “maitim ang dugo” (dark-blooded people) know each other.

Saudi Arabia plays with fire by counting on US
Saudi Westernization, the Union of Islam and the Union of Muslims
Comment