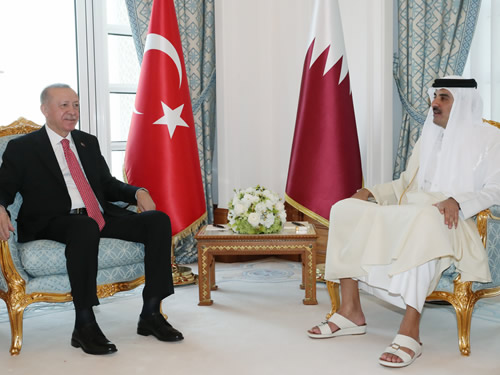 President Recep Tayyip Erdoğan’s last visit to Qatar was quite significant in terms of boosting bilateral ties. Turkey and Qatar have had good relations since Erdoğan rose to power. Besides the president, it should be recalled that the efforts of former Qatari Emir Hamad bin Khalifa Al Thani were also decisive in reaching this level. What brought them together was certainly like-mindedness rather than interests. If you have common views and policies, it does not take long for two parties to find each other. That was the case, especially for the Ankara and Doha governments.

In fact, both countries suffered from the newly formed but strong alliance. Particularly their stance in support of people against authoritarian regimes led to hostility from other regional countries, which thought that the two’s support of popular uprisings would ruin their and friendly countries’ regimes. However, from an objective perspective, it is hard to argue that the Turkish-Qatari joint regional policies were morally and legally wrong.

For instance, the whole world welcomed uprisings for a democratic transition in the Middle East during the Arab Spring, but few countries took action to support people against dictators except for making pro-democracy statements. Fortunately, Qatar with its soft power and Turkey with its hard power could contribute to the democratic transition though they failed eventually since the rest of the world remained silent or supported authoritarian regimes. Although Turks and Qataris seem to be the losers, they are actually the winners because of their posture on the right side and the cost they paid for peace in the region.

In addition, both countries supported each other during their turbulent epochs. We remember well that when Qatar was blockaded by four countries in 2017, Turkey sent humanitarian aid to the Qatari people and reinforced its Doha-based brigade to stop a likely invasion. Meanwhile, some pundits may deem Turkey’s policy as aggressive, but it was not. It just wanted to prevent a likely conflict among brotherly countries. Time has shown that Turkey’s quick action to mitigate the impact of the blockade was correct and necessary as Qatar and the blockading countries have restored their relations. It is less likely that hostility among them will be as fierce as it was a few years ago.

On the other hand, the relatively small – but a middle power in my opinion – State of Qatar lent a helping hand to Turkey when the latter was economically insecure against foreign and internal attacks. Such reciprocal support cemented the friendship and brought inter-state relations to the current level. It can be argued that the Turkish-Qatari ties are inspiratory for other countries since both states invested in friendship rather than interests, which naturally boomed thanks to good relations. The model relationship proves the truth of the proverb “a friend in need is a friend indeed.” Besides, it is a good example of how the combination of soft power and hard power, which I call combined power academically, can be so effective in international relations.

How storm turns to sunshine

However, it does not mean that the Turkish-Qatari relationship develops on account of other countries in the region. If a cool wind is blowing in relations of Arab states as well as Turkey, it is because of the transiency of hostilities that never become deeply rooted due to the ethnic, religious and historical brotherhood. For example, I have checked the Turkish Foreign Ministry’s statements released in the last few years and seen that Turkey used the word “brother” for all Arab countries regardless of the decline in relations. Perhaps, this is why stormy days suddenly became clear and leaders have visited each other in recent days.

It seems that all countries have learned some lessons from past events and the tensions that arose in the last decade, and they will not repeat the same mistakes against each other. They all know their limits and will not likely violate the space of others, though the competition will continue. Actually, rivalry is good provided that rivals do not hurt each other. I guess that regional powers will try competing without clashing this time and understand how beneficial peace is.