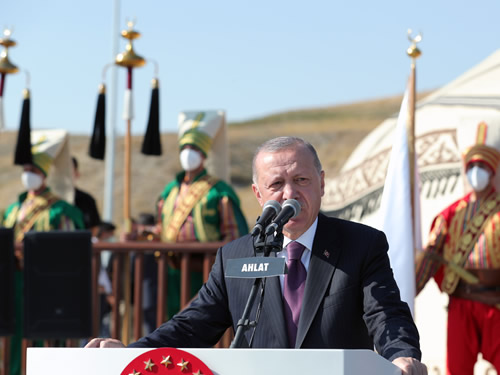 President Recep Tayyip Erdoğan delivered a speech at the 950th anniversary of the Victory of Malazgirt.

“WE PURSUE THE SAME GOALS AS OUR NATION”

“In the past 19 years, we and our nation have looked to the same direction, pursued the same goals, put up the same fights. By doing so, we have always advanced our country. Neither tutelage plots nor terrorist organizations’ attacks or putschists’ attempts or economic hitmen’s traps have been able to stop our march on the path towards building a great and strong Turkey upon our robust infrastructure.”

Noting that the restructuring of the global political and economic order further highlighted Turkey’s importance, President Erdoğan said: “Our country used to fight for, so to speak, its survival within its borders. Now, we have become a country that has a say in every critical issue in its region and the world. Inshallah, we are nearing the future, which symbolizes the safety, stability, prosperity, justice, conscience and morality we built for us, our youth and all our friends.”

Prior to the event, President Erdoğan and Chairman of the Nationalist Movement Party (MHP) Devlet Bahçeli paid a visit to the Seljuk Cemetery in Bitlis’ Ahlat district.