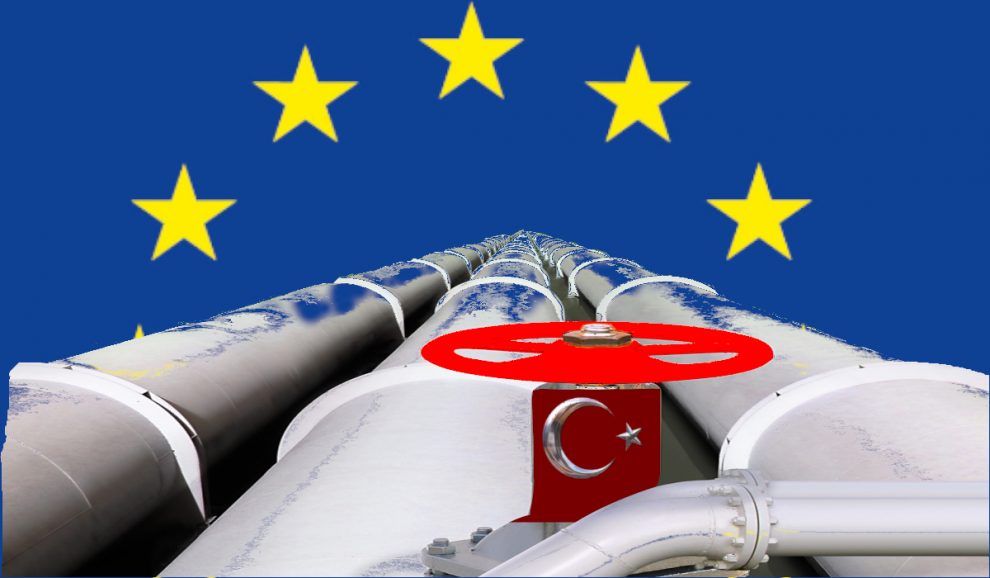 Turkey has worked hard to become an energy hub connecting Asia and Europe. Now it’s also set to gain an important role in the security and energy architecture of Eurasia.

In 1906, the first energy pipeline in the South Caucasus was completed connecting Baku on the Caspian Sea with Batumi on the Black Sea. More than 112 years later, this pipeline carrying kerosene, measuring a mere 20 centimetres in diameter and 835 kilometres long, has been replaced with a modern network of natural gas and oil pipelines connecting the heart of Eurasia with the outside world.

Even with the network of existing pipelines, such as the Baku-Tbilisi-Ceyhan pipeline, the Baku-Supsa pipeline, and the South Caucasus pipeline, there is more work to be done to better connect Europe with the Caspian region.

Key parts of the Southern Gas Corridor currently under construction are the Trans-Anatolian Natural Gas Pipeline (TANAP) and the Trans-Adriatic Pipeline (TAP).

Later this month on 12 June the TANAP will be officially inaugurated by Turkey and Azerbaijan. This pipeline will transport gas from Azerbaijan’s Shah Deniz-2 gas field, and other areas of the Caspian Sea, through Georgia to Turkey.

At the Turkish-Greek border, the TANAP will link up with the forthcoming TAP to deliver gas from Turkey to Italy, through Greece and Albania, and then to the rest of Europe. The Trans-Adriatic Pipeline is also progressing as planned and is expected to be finished on time in 2020.

Many of the geographical and political obstacles for the Trans-Adriatic Pipeline have been overcome. Around 90 percent of the pipeline route has been agreed through Greece and Albania and 73 percent of the pipeline has been completed. Turkish and Greek cooperation with the TAP project is a great example of how mutual national interests and pragmatism can overcome geo-political differences and longstanding animosities.

There were concerns that the new government in Italy would cancel the project, or at least impact it in a negative way. Thankfully, the new governing coalition, formed of the populist Five Star Movement and Lega political parties, both of which criticised the Trans-Adriatic Pipeline coming to Italy, made no specific mention of the project in its coalition agreement. This means that the project will most likely continue ahead unimpeded.

There is huge future potential for the Southern Gas Corridor — especially if the dream of a Trans-Caspian Gas Pipeline (TCGP) can be realised connecting Europe with key Central Asian gas markets via the Caspian Sea. An estimated 292 trillion cubic feet of natural gas in proved and probable reserves are in the Caspian region. Turkmenistan alone has the world’s 4th largest proven natural gas reserves.

As current technology and gas prices allow, a pipeline is the only economically viable option to move gas across the Caspian Sea. Due to costs in the liquefying process, transporting natural gas as Liquefied Natural Gas (LNG) is only profitable after 2,000 km or more. The distance between Turkmenbashi, Turkmenistan to Baku, Azerbaijan is only 270 km. So clearly, LNG transport is not a realistic option.

There has been some talk about an agreement on the legal status of the Caspian being resolved later this year, but don’t hold your breath. Year after year similar suggestions have been made with little or no progress in actually settling the dispute.

Currently, Europe is too dependent on Russia for much of its energy. This is only going to get worse when the controversial Nord Stream 2 becomes a reality.

This proposed natural gas pipeline will run alongside the existing Nord Stream pipeline under the Baltic Sea in northern Europe, directly connecting Russia and Germany and bypassing several other European countries.

Moscow has long sought to control the flow of oil and gas to Europe and has never liked pipelines that bypass Russian territory. The Kremlin’s mentality is that, if Europe is not buying oil and gas from Russia, it should not be buying it from anywhere else.

The region has come a long way since the single kerosene pipeline in 1906. The Southern Gas Corridor could alter the energy landscape in Europe in a positive way. Recent developments with the Trans-Anatolian Natural Gas Pipeline and the Trans-Adriatic Pipeline should be very welcome in European capitals.

Each cubic meter of gas that Europe can buy from Azerbaijan, Kazakhstan, or Turkmenistan that enters Europe via Georgia and Turkey is one less than it must depend on from Russia.

The Southern Gas Corridor could not come at a better time for Europe.

Qatar’s brave stance against blockade
Mr Trump, Jerry has a question for you
Comment