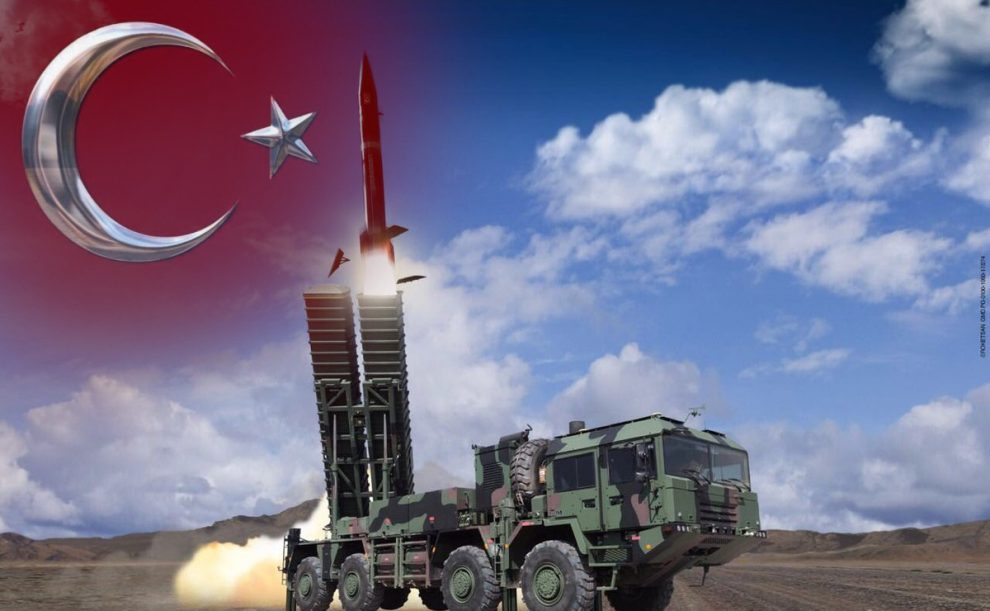 Turkish defense planners consider the Bora line to be a high-precision, conventional and tactical asset for battlefield use

In late May 2019, press sources reported that the Turkish military combat-tested the Bora ballistic missile during Operation Claw, a counter-terrorism campaign targeting the PKK in northern Iraq.

The incident marked a milestone for Turkey’s burgeoning defense capacity. Bora was officially unveiled back in 2017, at IDEF-17 exhibition, by ROKETSAN.

In May 2017, the missile was tested in the Black Sea port city of Sinop. At IDEX-2017 of the United Arab Emirates, this time, Bora’s export version “Khan” was unveiled. Impressively, within only two years, the ballistic missile saw its combat debut, showcasing the Turkish defense sector’s signature in producing high-end systems.

A tale of ‘Boost’

Originally, the Bora tactical ballistic missile is a product of Turkish–Chinese defense cooperation, centered on China’s B-611 baseline. In tandem, available writings trace back Turkey’s 300-mm MBRL (multi-barrel rocket launcher) and the J-600T battlefield ballistic missile to the above-mentioned bilateral military ties between Ankara and Beijing, inaugurated in the late 1990s.

Turkey’s new missile has a range of 280 km, and has GPS / INS guidance. Whereas the Chinese B-611 has a CEP (circular error probable) of some 50 meters, open-source evidence suggests that ROKETSAN has managed to reduce it to some 10 meters for Bora, making the missile more accurate. The missile can carry a conventional warhead with 450-kg payload. Considering the MTCR (missile technology control regime) restrictions, and given the fact that Turkey also seeks to export Bora, current specifications of the missile depict it as a reliable, combat-tested tactical asset.

From a military standpoint, the Bora tactical ballistic missile could offer robust war-fighting capabilities for the Turkish Armed Forces. The missile is road-mobile, carried by a TELAR (transporter-erector-launcher). Road-mobile missiles are more survivable on the battlefield, as they can be deployed to different launch positions flexibly. While fixed launch sites could come under adversaries’ preventive strikes, locating and targeting TELARs necessitates a consuming intelligence effort. Secondly, Bora is a solid-propellant missile. Thereby, it has a shorter launch cycle compared to liquid-propellant missiles (i.e. the Scud family of ballistic missiles) and requires less personnel to operate.

Third, thanks to its low CEP and some 450-kg warhead, it can eliminate a broad array of targets in the battlefield, ranging from bases to troop concentrations and even critical infrastructure that falls within its range. Such a firepower, coupled with pinpoint accuracy, provides Turkey with many options. In fact, armed conflicts in Yemen and Ukraine showed that even the Cold War-remnant, inaccurate Tochka (SS-21 Scarab) missiles with a great CEP can inflict massive damage. Thus, new generation ballistic missiles with more unpredictable terminal homing paths and small CEP can really register game-changer results.

Geopolitically, developing adequate missile capabilities remains a must for Ankara given its regional threat landscape. Turkey’s Middle Eastern doorstep has long been plagued by an arms race for ballistic missiles and weapons of mass destruction. Syria and Iran are formidable missile proliferators in this respect. Besides, the North Korean strategic weapons know-how has been pouring into these countries for some time. One should recall that back in 2005, the Syrian Arab Armed Forces test-launched Scud-type ballistic missiles (including a North Korean manufactured Scud-D with a range of some 700 km). The missiles were tested in the airburst mode, which is used to deliver chemical and biological payloads. One of the missiles fell onto the Turkish border city of Hatay. Likewise, one should also recall how top Iranian military figures voiced threats to hit NATO’s X-band radar in Kurecik, Malatya, namely on Turkish soil.

Furthermore, Turkey is surrounded by missile contingents across Crimea and Armenia. While Ankara strives to acquire defensive strategic weapons capabilities through high-altitude / long-range air and missile defense systems procurement, developing an offensive deterrent within the MTCR framework remains a must to ensure intrawar deterrence, that is, tacit bargaining capacity within an ongoing armed conflict by controlling escalation patterns.

Although much has been speculated about Turkey’s ballistic missile program, let us wrap up the known facts. Relatively shorter-range tactical ballistic missiles (known as battlefield ballistic missiles, generally considered to have less than a 300-km range) are force-multipliers, especially when equipped with high precision. At the time being, Bora is such an asset with a newly gained combat record. Besides, Turkey’s transparent test-launching policy also shows the confidence backing the Bora line’s development.

In the foreseeable future, one should expect a gradual but steady uptrend in the Bora line. Turkey has a clean record when it comes to complying with the MTCR requirements, and is party to all major WMD non-proliferation regimes. Thus, militarily, we can safely assume that Turkish defense planners consider the Bora line to be a high-precision, conventional and tactical asset for battlefield use. This end-state requires soberly capitalizing on the test-results and rare occasions of combat action, such as Operation Claw.

More complex terminal homing performance or improved warhead design could be the next targets, although there is no open-source clue about the roadmap. Only, Turkish officials voiced the idea of Bora-2 in the past, without elaborating what the second batch could bring about. In the meanwhile, Ankara would explore lucrative markets for the export variant in league with the growing arms sales performance of the Turkish defense sector.