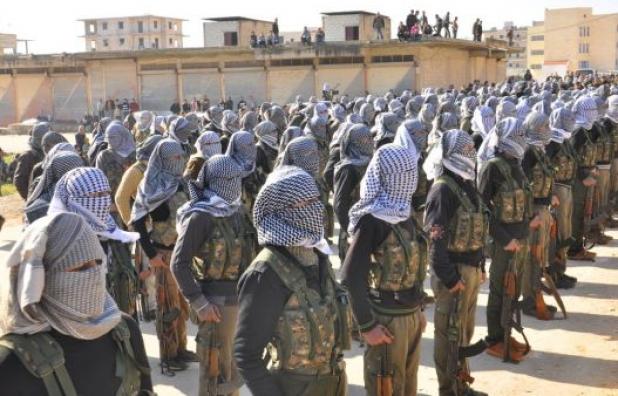 Turkey’s defensive military offensive, Operation Olive Branch, started officially with heavy shelling of PKK/YPG positions in Afrin by 72 Turkish jets symbolising the 72 soldiers killed in action during the country’s last operation inside Syrian territory, Operation Euphrates Shield. For Turkey, the operation in Afrin is the first step towards ending the territorial dominance of the terrorist Kurdistan Workers’ Party (PKK) and its affiliated People’s Protection Units (YPG) in Northern Syria. Ankara’s strategy is to eliminate terror threats on its borders and protect the routes between Turkey and the Middle East. However, in a region that has become a wrestling mat for various power centres, Ankara’s success depends on many factors.

The PKK has been fighting the Turkish government for more than three decades and is regarded as a terrorist organisation not only by Turkey but also by the United States and many European countries. Thousands of civilians who refused to support the organisation have been killed in South-East Turkey in mass shootings. Bomb attacks by the PKK have killed many civilians in Turkish cities. According to the May 2002 edition of the PKK’s official magazine, Serxwebun, the Democratic Union Party (PYD) and the YPG were established in 2002 as the terror group’s Syrian branch and armed wing. The Syrian government stopped supporting the PYD and YPG following pressure from Turkey. Although the PYD/YPG now try to conceal their ties to the PKK, a glance at the organisation’s top officials confirms that the PYD/YPG are indeed an offshoot of the Kurdistan Workers’ Party. Even US officials, who support the PYD/YPG and deny the links to the PKK have accidently but rightly accepted this clear-cut reality.

Labelling the PYD/YPG as the sole representative of Syrian Kurds — or using the term “Syrian Kurds” instead of PYD/YPG in every news bulletin — does not makes the lives of Kurds, Arabs or Turkmens any easier. This delusional rhetoric of the West only helps the PYD/YPG to strengthen their totalitarian role in the region. In many instances, international organisations such as Amnesty International have reported the groups’ forced displacement of civilians and home demolitions. Human Rights Watch and the US State Department have also reported the PYD/YPG’s use of children as fighters.

Turkey’s offensive against the PYD/YPG in Syria commenced in Afrin for several reasons. For a start, in Afrin, the Turkey-PYD/YPG buffer zone was protected by Russia, unlike the US presence in other PYD/YPG-held areas. Russia needs Turkey to orchestrate a grand settlement to end the Syrian crisis. Hence, it was easier for Ankara to convince Moscow rather than Washington about the need for such an offensive as Operation Olive Branch. At a moment when the US and Europe have lost their lead role in ending the crisis in Syria, solving the seven-year conflict is a major opportunity for Russia to re-emerge as a global power. Thus, Russia’s green light to Turkey’s Afrin assault is a considerable concession.

Furthermore, the Turkey-Syria border at Afrin is more prone to infiltration by terrorists. The Amanos Mountains between Afrin in Syria and Turkey’s Hatay region provide safe routes for PKK and radical-left terrorist organisations to cross the border. Mountainous terrain is challenging for security forces trying to detect such infiltration. In many cases, terrorists trained in Afrin have succeeded in crossing into Turkey and carrying out attacks against civilians. According to the security forces, apart from the PKK and its radical-left allies, Daesh terrorists have also been allowed by the PYD/YPG to use this route to enter Turkey. In contrast, east of the River Euphrates the terrain between Turkey and PYD/YPG-held areas in Syria is generally flat. This makes it easier for the security forces to detect potential infiltrators and prevent them from entering Turkey. As such, cleansing Afrin of terrorists is more of a priority for Turkey as it seeks to defend itself against terrorism.

The future of the operation

The topography of the Afrin region gives an advantage to its defenders, making the progress of Turkish troops much slower. Efforts to minimise civilian causalities and detecting terrorists camouflaged as civilians will also slow down the operation.

The biggest challenge on the ground will be sweeping the PYD/YPG from urban areas. Landmines, IEDs and MANPADS (man-portable air defence systems) provided by the US will be the main challenges facing the Turkish forces as they probe deeper into the region. The Battle of Al-Bab City during Operation Euphrates Shield was a similar experience of urban warfare for the Turkish army.

Although Russia withdrew its military police from Afrin and stood aside during the Turkish air strikes, its officials and newspapers took an oppositional stance against the operation. Moscow’s indecision evokes the delicate balance that Turkey must watch out for. An accord between the Syrian regime and the PYD/YPG might harden the already difficult situation in the region. Such an accord, and the deployment of Syrian troops to Afrin, would risk an exchange of fire between Turkish and Syrian forces. To prevent this, diplomatic channels between Turkey and Russia as well as Damascus should be kept open.

Operation Olive Branch will send a strong message to Washington. Turkey hopes that the US will understand its willingness to dismantle the PYD/YPG in North Syria and stand aside in future operations in Manbij and other PYD/YPG areas in Syria. For Turkey, Operation Olive Branch and future operations against the PYD/YPG have the status of pre-emptive strikes. They are a price that Turkey is willing to pay in order to prevent a greater threat; the creation of a terrorist belt along its southern border.

Mr. Abdullah Keşvelioğlu is an Associate Researcher at TRT World Research Centre. He has a bachelor’s degree in Political Science from Marmara University. He is currently working towards a master’s degree in Security Studies at University College London.

WHO IS TURKEY ATTACKING IN AFRIN?
Is Turkey attacking Kurds?
Comment