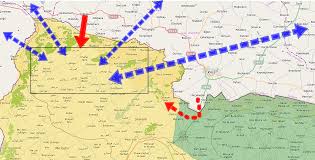 Turkish army’s Afrin operation named “Olive Branch” began last Friday with strikes of jet fighters targeting YPG fronts. Olive Branch would eventually happen as YPG, PKK’s Syria branch, turned the city into an enclave due to lack of authority in Northern Syria.
Western media, as always and expected, voluntarily or with order, inaugurated a slander campaign against Turkey’s operation which is a complementary part of its struggle with seperatist Kurdish terrorism. While almost all Western media outlets wired news about Afrin operation with headlines like ” Turkey attacks Kurds”, “Turkey attacks US-backed Kurds”, “Turkey’s ethnic cleansing”, and so on, many of them did not use the word “PKK”. We all know that Turkey targets the PKK as it did in the past and probably in the future as well. However, “PKK” suddenly disappeared or replaced with “Kurdish groups” in news reports.

We are quite sure that it is Western media’s Turkey and Erdogan hatred that provokes them to mislead their readers with fake news. In fact, it is a kind of punishing Turkey which pursues an independent policy by leaving Western orbit. Since we read worse stories like praising failed July 15 coup and defending coup plotters in Western media, actually, we are not so surprised to witness their support of the PKK and its sister terrorist group, YPG. Yet, since not everyone knows facts about Turkey’s operation, we must clarify some points so as to avoid mind confusion.

The fact that Turkey is attacking Kurds is an absolute illusion as Turkey assaults only PKK/YPG militants who are in war with Turkey for decades and responsible for the death 40 thousand people. Besides, many PKK militants infiltrated Turkish borders from Afrin and conducted attacks on Turkish territories. Still there are more than a dozen PKK militants coming from Afrin and hidden on Amanos mountains of Turkey. In other words, Afrin is a significant transit way to Turkey for the PKK.

Moreover, Turkey is not attacking Afrin just because it is a Kurdish city. If it was populated by another ethnic group, e.g. Arabs, would not Turkey attack it? Of course Turkish army would still carry out the operation. Meanwhile, Turkish government has stated that Manbij will follow Afrin after the latter is cleared from terrorist groups. I wonder what  headlines of anti-Turkey media will be. May they claim that Turkey attacks Arabs since Manbij is an Arab city?

I also remember that no media organs questioned demographics of Al Bab when Turkey took the city from DAESH. Might Western journalism discriminate among terrorist groups? Since the PKK is pro-West, may journalists have sympathy of it? Probably they have as none criticised SDF (masked PKK) for not withdrawing from Arab cities after taking them from DAESH.

In addition, we should also say some words about the term “US-backed forces”. How can a country backs a group, the PKK, enlisted in its terrorist groups list? Isn’t such a move a way of legitimizing terrorism? The weirder aspect is that the PKK fights its NATO ally, Turkey. Does such collaboration match friendship? What if Turkey had supported America’s enemies? Would it be ethical?

I think our so-called American allies are aware of how unethical their policies but since ethics has no value in the context of pursuing their interests, they support a terrorist group and prefer it to Turkey. While such policies will deteriorate US-Turkish relations much more, the result will be a zero-win game as the PKK is a threat to Turkey’s existence for which Turks can bear any consequences.