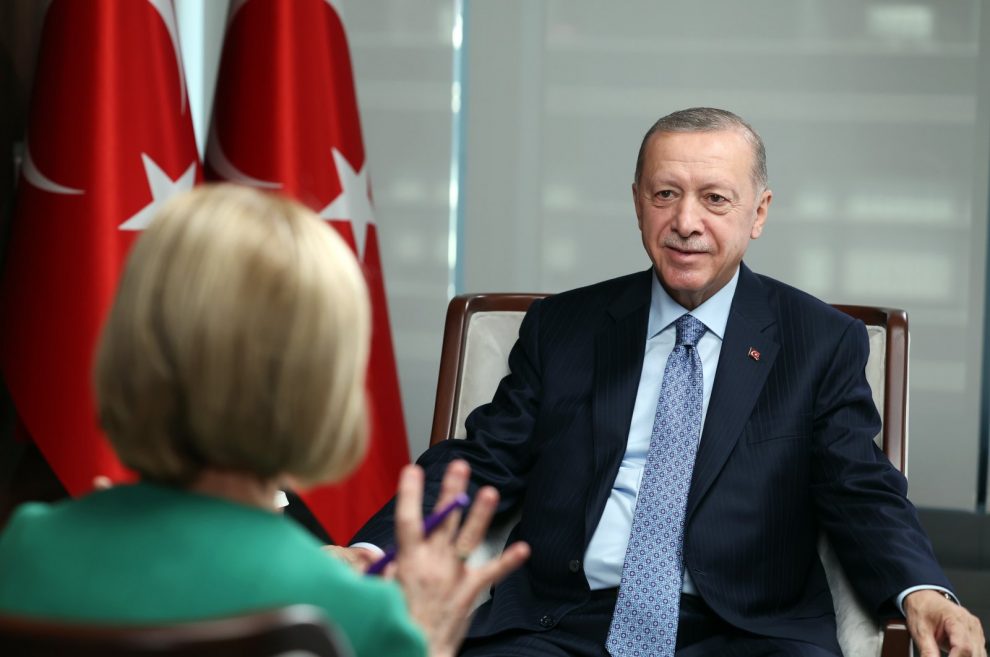 Türkiye is assisting in resolving a hostage crisis between Russia and Ukraine and deescalating tensions between the two countries, President Recep Tayyip Erdoğan said on Monday.

“We are now working to resolve the hostage crisis. We are taking steps and we have reached a certain point. On the other hand, we also took steps regarding the grain corridor,” Erdoğan said in an interview with PBS NewsHour.

Following a two-day visit to Uzbekistan, Erdoğan is currently in New York City to attend the 77th session of the U.N. General Assembly and is holding talks on the sidelines with heads of state and government.

“I had extensive meetings with Russian President Putin in Uzbekistan. I realized that they are actually trying to finish this as soon as possible. This situation is a big problem.

“At this point, for example, an agreement has been reached on the exchange of 200 hostages. This is a good development. Because with these hostages, a very important step has been taken there. Currently, officials are managing its technical dimension. With this, we will have achieved a good development,” Erdoğan said.

Erdoğan stressed that he has told both Putin and his Ukrainian counterpart Volodymyr Zelenskyy that “there is no winner in a war that ends in the deaths of people.”

The president said that Türkiye has followed a balanced policy between Russia and Ukraine since the war started in February and favors listening to both sides.

“That’s why we have a persistent desire to bring these leaders together. Let’s bring them together. I want to hear everything from them. We haven’t succeeded yet, but I’m not without hope,” he added.

Speaking about the grain corridor, Erdoğan reiterated his wish for grain exports from Russia to start soon, saying: “My only desire is to ensure the shipment of products to underdeveloped or poor countries, not developed countries.”

Türkiye, the United Nations, Russia and Ukraine signed an agreement in Istanbul on July 22 to resume grain exports from three Ukrainian Black Sea ports, which were paused after the Russia-Ukraine war began.

A Joint Coordination Center with officials from the three countries and the U.N. was set up in Istanbul to oversee the shipments.

Since the first vessel sailed under the deal on Aug. 1, more than 150 ships have carried over 3 million tons of agricultural products from Ukraine.

Responding to a question on bilateral relations with the U.S., Erdoğan said: “I can’t say it is at an ideal point.”

He said the bilateral trade volume between the two countries has not reached the desired level, determined during U.S. President Donald Trump’s term in office as $100 billion.

“In other words, the Türkiye-U.S. trade volume should not be $20, $25, $30 billion. We have to exceed these. Besides, we are not at the desired level in the defense industry,” Erdoğan added.

Regarding the F-16 fighter jets issue between the two countries, Erdoğan said the US is doing “wrong” to a friendly country by taking a political decision against Türkiye.

In July, however, the U.S. House of Representatives approved legislation creating a new hurdle for the sale.

It prohibits the sale unless President Joe Biden certifies that the transfer is in U.S. national interests and guarantees to Congress that in the 120 days prior to the transfer, the Turkish government has not “violated the sovereignty of Greece, including through territorial overflights.”

Türkiye, for its part, has made it clear that Greece-related conditions are not “binding” and expressed hope that the US would not fall for such “games.”

Erdoğan also criticized the U.S. for giving all kinds of support to Greece for F-16 jets but not supporting Türkiye in this regard.

“In this case, Türkiye’s job is to take care of itself. Otherwise, we don’t have a problem with America,” he added.

‘Türkiye part of world; neither East nor West’

On Türkiye’s possible membership in the Shanghai Cooperation Organization (SCO), Erdoğan said: “I have to say this very clearly: We are part of the world; neither East nor West.”

After attending this year’s SCO summit in Uzbekistan as a dialogue partner, Türkiye might take a further step at the 2023 summit in India, he said, adding Ankara “targets” membership.

Erdoğan said the EU cannot question Türkiye about who it is meeting with, adding: “While we are holding these talks, we will not be accountable to the EU on this point … I negotiate with all countries because we are all part of this world.”

Türkiye applied for EU membership in 1987 and has been a candidate country since 1999. Negotiations for full membership started in October 2005 but have stalled in recent years due to political hurdles erected by some countries.

Erdoğan reiterated that Türkiye will not adopt a positive attitude toward the NATO membership bids of Sweden and Finland unless they keep their promises in the fight against terrorism.

“If you put forward your struggle against the terrorists, we will give you all kinds of support in this regard. Of course, the final decision maker regarding this is our Parliament,” he said.

Sweden and Finland formally applied to join NATO in June, a decision spurred by Russia’s war on Ukraine.

But Türkiye, a member of NATO for over 70 years, voiced objections to the membership bids, criticizing the countries for tolerating and even supporting terrorist groups.

A trilateral agreement signed among the countries in June stipulates that Finland and Sweden will not provide support to the YPG, the PKK’s Syrian offshoot, or to the Gülenist Terror Group (FETÖ) – the group behind the 2016 defeated coup in Türkiye – and said Ankara extends full support to Finland and Sweden against threats to their national security.

Türkiye’s Parliament must ratify Finland and Sweden’s membership bids for them to join NATO.

If the terrorists are not allowed in Sweden and Finland, Erdoğan said, “We will show them the convenience we can.”

The Turkish president will address the 77th session of the U.N. General Assembly on Tuesday. The session will be held under the theme of “A Watershed Moment: Transformative Solutions to Interlocking Challenges.” On the sidelines of the U.N. General Assembly session, Erdoğan will hold talks with heads of state and government. During his visit to New York, the president will also attend an event organized by the Türkiye-U.S. Business Council. Erdoğan is also expected to attend a reception by U.S. President Joe Biden in honor of the heads of delegations.