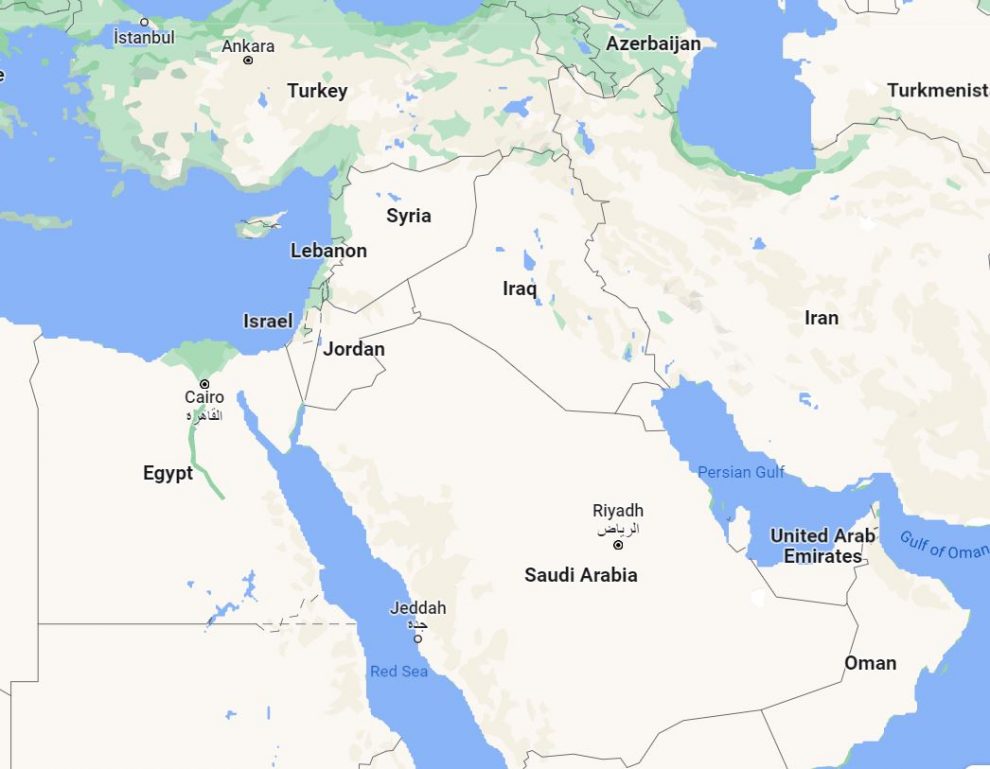 Struggling to remain on the sidelines of the 21st century’s watershed war in Ukraine, Middle Eastern nations are discovering that they may be fighting their battles with an outdated toolkit.

As a result, the Ukraine war could saw off the legs from under the table of Middle Eastern détente that already are built on shaky ground.

For the past 18 months, Middle Eastern rivals – Saudi Arabia, the United Arab Emirates, Qatar, Turkey, Iran, and Israel – have sought to hedge their bets by diversifying their relationships with major powers, the United States, China, and/or Russia.

Increasingly, the rivals are finding out that the Ukraine conflict threatens to narrow their ability to hedge. The conflict has, irrespective of the outcome of the war, reduced not only big power competition to a two- rather than three-horse race but also opened the door to a Cold War-style international relations based on the principle of ‘you are with us or against us.’

Even if portraying the Ukraine conflict as a showdown in a titanic battle between democracy and autocracy may be misleading and/or overstated, it does not distract from the fact that the war has shaken, if not undermined, a major pillar of autocracy, Russia.

Even so, Saudi Arabia, the UAE, and Israel may privately welcome potential Russian sabotage of negotiations in Vienna to revive the 2015 Iranian nuclear agreement, given that they view it as deeply flawed. Middle Eastern states may also find that the sabotage is one of Moscow’s last hurrahs as it is hit by harsh Western sanctions and drawn into what is likely to be an all-consuming quagmire.

As fears grew of a Russian monkey wrench, Iranian Spiritual Leader Ayatollah Ali Khamenei defended Iran’s support of militias in various Arab countries, including the Houthis in Yemen who have been firing missiles and drones at targets in the two countries. On Thursday, a Houthi drone attacked a refinery in Riyadh, causing a small fire.

“Our presence in regional issues is our strategic depth… (It’s) a means of power,” Mr. Khamenei told Iran’s Council of Experts that includes the country’s most powerful clerics.

Turkey and Israel have so far been able to package their hedge by exploiting their close ties to both Russia and Ukraine to play the role of mediator even if mediation at this stage of the war has little if any chance of success.

By contrast, Saudi Arabia and the UAE find themselves far more exposed and in the ironic position of sharing a boat with their nemeses, Iran and its Lebanese ally, Hezbollah, as they maneuver in a geopolitical minefield. Like the conservative Gulf states, Iran too has sought to remain on the sidelines of the Ukraine conflict.

More fundamentally, the conflict could upset the house of cards on which Middle Eastern détente is built. The driving principle of that détente is to kick the can down the road on significant disagreements over issues, including political Islam and Palestine in favour of closer economic, and in the case of Israel, the UAE, Saudi Arabia, and potentially Qatar, closer security cooperation.

This week, Israel Defense Forces chief Aviv Kohavi reportedly discussed military cooperation with his Qatari counterpart, Salem bin Hamad bin Mohammed bin Aqeel Al-Nabi, during an official visit to Bahrain. Unlike Bahrain and the UAE, Qatar has refused to formalize its informal relations with Israel as long as there is no settlement of the Israeli-Palestinian conflict.

The Russian invasion of Ukraine resonates among the Gulf’s smaller states, three of which know first-hand what bullying by larger neighbours in violation of international law means. Iran has occupied three Emirati islands in the Gulf since 1971. Iraq invaded Kuwait in 1990 while fears of a military intervention accompanied a 3.5 year-long Saudi-UAE-led economic and diplomatic boycott of Qatar.

This week, Washington Post columnist Farid Zakaria argued that the Ukraine conflict has ushered in a new era “marked by the triumph of politics over economics. For the past three decades, most countries have acted with one lodestar in mind: economic growth. They have embraced trade, technology, and domestic reforms, all to produce more growth. Those kinds of choices are possible in an atmosphere in which one does not have to worry that much about the core issue of national security.”

That could be as true for the Middle East as it is for much of the world, particularly if sitting on the fence becomes less of an option and fault lines sharpen if the Vienna talks fail.

Already, the crown princes of Saudi Arabia and the UAE, Mohammed bin Salman and Mohammed bin Zayed, may find that they overplayed their cards when they allegedly refused to take a phone call from US President Joe  Biden to discuss cooperation in increasing oil production to reduce prices.

Mr. Biden ultimately spoke to King Salman, with Mr. Bin Salman listening in although not participating. Mr. Biden had earlier offered to talk with Mr. Bin Salman, breaking a boycott of the crown prince because of his alleged involvement in the 2018 killing of journalist Jamal Khashoggi.

Mr. Bin Zayed is proving to be the most overexposed. The UAE has already begun to dither on the oil production with its powerful ambassador in Washington, Yusuf al-Otaiba, suggesting that the Emirates was considering a hike, only for Energy Minister Suhail Al Mazrouei to reiterate the country’s commitment to current OPEC+ production levels.

Emirati officials insisted that the two statements were not contradictory. They said the UAE favoured a production increase but was bound by OPEC+ agreements. OPEC+ is scheduled to meet on March 31.

The manoeuvre was partly an Emirati effort to cover the country’s flank and partly a demonstration of the UAE’s ability to help reduce prices. Oil prices dropped 13 per cent after Mr. Al-Otaiba’s remarks.

The influx of Russians looking for places to safely park their money and assets; leaks about real estate holding of oligarchs in Dubai, including ones belonging to now sanctioned individuals; stepped-up private aircraft traffic between Moscow and Dubai, and the sighting of Russian-owned superyachts off the UAE coast could not come at a worse time.

Earlier this month, the Financial Action Task Force, a Paris-based international anti-money laundering and anti-terrorism finance watchdog, grey listed the UAE for lagging in identifying illicit funds flowing into the country. The listing that groups the UAE alongside 22 others, including Pakistan, Syria, South Sudan, Yemen, and Myanmar, dealt a blow to the country’s image as a go-to global financial hub

“What separates Dubai from other traditional havens for dirty money is the amazing secrecy. As a fugitive in Dubai, you can snatch up property, stash your yachts and set up bank accounts with very few obstacles. It’s also one of the few autocracies that’s a destination — rather than a transit location — for illicit flows,” said Jodi Vittori, who co-authored a study of Dubai’s financial flows.