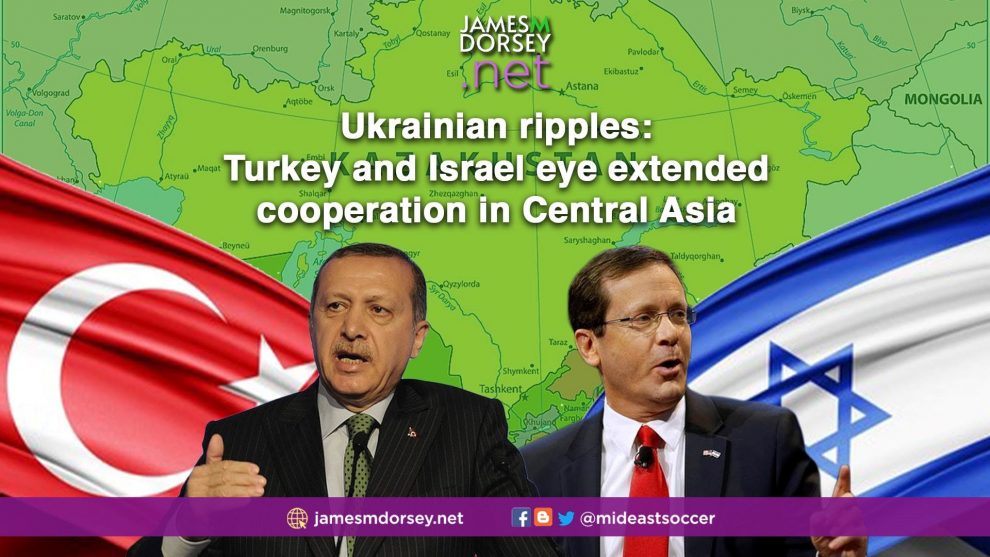 A recent dinner in Washington suggests that a seemingly forthcoming visit to Turkey by Israeli President Isaac Herzog could be about more than putting an end to strained relations between the two erstwhile allies.

Engineered by an influential American Jewish leader, Malcolm Hoenlein, vice-chair of the Conference of Presidents of Major American Jewish Organizations, the dinner was attended by the Washington ambassadors of Israel, Turkey, Uzbekistan, and Kazakhstan and hosted by the envoy of Azerbaijan.

It was designed to find a pathway to closer economic and security cooperation between Israel and the Turkic countries, which have diplomatic relations with the Jewish state.

The significance of the dinner lies not only in the fact that it occurred in advance of Mr. Herzog’s visit. The ambassadors met as the Ukraine crisis threatened to force Turkey to choose between NATO and Russia.

A NATO member with close ties to Russia that has bought a Russian anti-missile system, Turkey has backed Ukraine, tightened military cooperation with the embattled East European state, and condemned Russia’s occupation in 2014 of Crimea.

Mr. Erdogan visited Kyiv earlier this month but saw his offer to mediate Ukraine’s conflict with Russia rebuffed by Moscow.

The Turkish president has since said he would like to resume talks with Israel on transporting Israeli gas to Europe. Europe’s gas supply could be in jeopardy if the West sanctions Russia in response to a potential Russian military operation in Ukraine. The sanctions could halt Russian gas sales to Europe.

Sanctions could also affect TurkStream, a gas pipeline that bypasses Ukraine by running from Russia under the Black Sea to Turkey, from where gas is pumped to Europe.

Turkish-Israeli gas cooperation would strengthen Mr. Erdogan’s bid to position Turkey as an alternative energy hub for Europe. Azerbaijan has said it was ready to supply Europe with emergency gas that would flow through Turkey should the Ukraine crisis disrupt Russian shipments.

Although Israel has yet to confirm the trip, Mr. Herzog appears set to become the first Israeli head of state to visit Turkey in 15 years. Mr. Herzog’s brother, Michael, is the Israeli ambassador in Washington who attended the dinner.

Relations between Israel and Turkey broke down after the killing in 2010 by Israeli commandos of 10 Turkish activists onboard a ship that was part of an aid flotilla attempting to breach the Israeli-Egyptian blockade of Gaza.

Last month, a phone call between Yair Lapid and Mevlut Cavusoglu was the first confirmed conversation between the two countries’ foreign ministers in 13 years.

The arrest in November on espionage charges and the subsequent release of an Israeli tourist couple for taking pictures of Istanbul’s Dolmabahce Palace, one of the city’s major tourism attractions, prompted the call and paved the way for an Israeli-Turkish rapprochement.

The palace on the shores of the Bosporus served as the administrative headquarters of Ottoman sultans in the 19th century and the place of death in 1938 of Kemal Mustafa Ataturk, the founder of modern Turkey.

The release of the Israeli couple and Mr. Erdogan’s outreach served multiple purposes. The Turkish leader did not want the incident to scare off badly needed tourists at a time of severe economic crisis.

The incident also provided Mr. Erdogan an opportunity to break through to Israel and reduce the United Arab Emirates’ geopolitical advantage in maintaining close ties to the Jewish state. From Mr. Erdogan’s perspective, the Ukraine crisis has only increased the utility of improved relations with Israel.

Mr. Erdogan this week arrived in the UAE for a two-day visit as part of a regional balancing act in which various Middle Eastern states are trying to ensure that their differences and multiple regional conflicts do not spin out of control.

UAE Crown Prince Mohammed bin Zayed heralded the visit, Mr. Erdogan’s first in almost a decade, as the start of a “prosperous new phase” of cooperation with Turkey. The UAE is Turkey’s foremost trading partner in the Gulf.

Some analysts suspect that the timing of the disclosure was intended to counter Israeli calls on Turkey to halt its support for Hamas, the Islamist group that controls the Gaza Strip, as part of a rapprochement with Israel.

The paper said several suspects linked to Iran had been detained. Turkish officials suggested the assassination attempt was in retaliation for the killing of Iranian nuclear scientist Mohsen Fakhrizadeh in 2020 by Israeli agents.

For Mr. Erdogan, repairing relations with Israel and forging a potential partnership in the Caucasus and Central Asia means walking a tightrope.

Mr. Erdogan has to balance improving relations with countries like Israel, Saudi Arabia, and the UAE perceived by their critics as having abandoned the defence of Muslim causes, including the plight of the Palestinians, with projecting himself as the Muslim leader who cares about his co-religionists.

As a result, Mr. Cavusoglu, the Turkish foreign minister, made a point of saying last week that “any step we take with Israel regarding our relations, any normalization, will not be at the expense of the Palestinian cause, like some other countries.”

At about the same time, Turkey charged 16 people arrested last fall on charges of being part of an Israeli spy network. Israeli intelligence sources have denied the existence of such a network.

“Ankara’s accusations of ‘espionage’ and apparent threats to raise the price for the detainees show that it was using hostage diplomacy involving innocent tourists. This is how Hamas, which is backed by Ankara’s ruling party, has also behaved… Normal regimes don’t detain innocent people,” thundered Seth J. Frantzman, the right-wing Jerusalem Post’s Middle East correspondent, shortly after the arrests last fall.