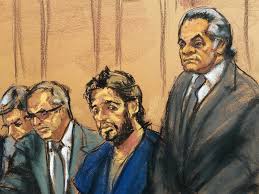 A phrase has been stuck in my head since they shoved Reza Zarrab (aka Rıza Sarraf) into that farcical federal courtroom in Manhattan last week, “A concerted effort.”

I would assume, on merely technical grounds, the adjective “concerted” means an effort planned and performed together. After all, you have hundreds of people involved in illegal phone tapping in Turkey, Iran and Pakistan; countless court people in Turkey and the U.S. transcribing them; dozens of people – God knows where – hand picking words from here and there and manufacturing new “recordings” or without bothering with this tedious job, directly adding words and even sentences into the transcription. This is something that is being done in “concert.”

Yet, the events have shown that for a concerted effort you do not necessarily need a group; an individual can perform an “arranged by mutual agreement; agreed upon, pre-arranged; planned, contrived; done in concert” effort. If you “force your heart and nerve and sinew” (by R. Kipling), it would also be a concerted effort and, as Kipling says, you “serve your turn,” that is, thus you do things on your behalf or do what you want them to do.

Hundreds of people are, as we speak, taking the fifth, or a deal with assistant district attorney to have their status changed from the defendant to the “government’s witness.” So what if an Iranian-born Turkish and Macedonian citizen pleads guilty to charges of a federal prosecutor? One thing: Almost all the press reports and the press releases of the U.S. Justice Department portrayed him as a defendant in the case titled, “U.S. versus Reza Zarrab, Mehmet Hakan Atilla, Zafer Çağlayan, Süleyman Aslan, Levent Balkan, Abdullah Happani, Muhammad Zarrab, Camelia Jamshidy and Hossein Najafzadeh – Conspiring to evade U.S. sanctions against Iran and other offenses.”

All these people had been charged with almost the same offenses by a Turkish prosecutor, and his dossiers had been thrown in his face by a court as based solely on “illegally obtained wiretaps.” From the traditional Turkish legal perception of justice, if a bunch of so-called proofs were considered illegal in accordance with Turkish law, then they should be illegal in any democratic country simply because Turkey is a democratic country and its laws (at least those pertaining to the procedural law) are up to the European standards.

That illegality was based not on mere technicalities, which could be dismissed saying, “Albeit illegal in the court of law, in the court of the people’s conscience, with their content, they speak of the truth”, it was part of a conspiracy that a group of police officers, under the supervision of certain prosecutors had manufactured these recordings.

Those recordings had been investigated by local and international authorities several times. Many other policemen and police chiefs testified to this effect. And finally that group of conspirators has been charged, tried and convicted. Many of them are serving their jail sentences. Some of them fled the country and are believed to be residing in the U.S. They are part of the Gülenist cult. That cult is the planner and the perpetrator of the July 15, 2016 coup bid.

There are telling stories about the arrests those policemen made on Dec. 17 and Dec. 25, 2013 while serving the arrest warrants issued by a certain court in Istanbul, whose judges are now either in jail or declared fugitives. One police chief had the guts to tell someone he was arresting that he would be “collaring the prime minister and ministers next so that they would have the meeting of the ministerial council in the jailhouse.”

How could a junior police officer know the extent of a small bribe operation unless the operation he was part of had been designed to cover the prime minister and ministers? Now, the ordinary citizen on the street in any town in Turkey sees where those recordings and transcriptions came from. For them, the crux of all this is one thing: To bring Turkey to its knees as a result of that concerted effort.

A letter from an ex-employee of Halkbank
GERMAN HOUSING PROBLEM: SHORTAGE OR SIMPLY XENOPHOBIA ?
Comment