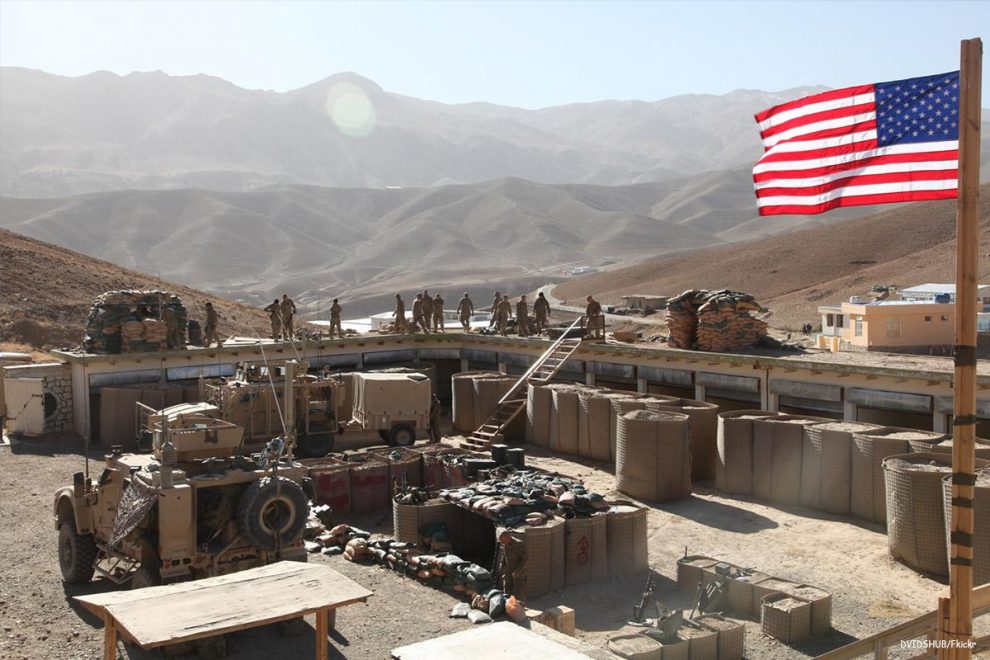 The Turkish semi-official, public but not under government management, news agency, Anadolu Agency, recently published an infographic. It put together finding about the foreign, that is, U.S. military bases and installations in the so-called Kurdish cantons.

The so-called here denotes the adjective Kurdish. But it should be used for the cantons as well. These areas – Hasakah, Kobani, Manbij and Raqqa – are historically Arab areas. Kurds, like elsewhere in Syria, are not in the majority in these provinces. Those organizations that are holding the area in their control are not Kurdish as the word connotes: The Democratic Union Party (PYD) and the People’s Protection Units (YPG) are organizations founded and run by not Kurds but terrorists from Turkey. If you wonder why the U.S. army and marines are photographed in northern Syria with some people with covered faces, you should know that they are wanted in Turkey for alleged terrorist acts, murder, kidnapping and theft. They are Kurds, ethnically speaking, but not representing any Kurdish minority legally. They have never participated in a democratically contested election, local or national. As to the concept of cantons as a name of an administrative division, it traditionally refers to those in Switzerland, which correspond to the states in the U.S. and Germany. Yet, because of the nature of these units in those countries, all these words bring a democratic and legal federation to mind. It sounds as if the unified and centrally run Syria has been dismembered, its constitution rewritten and now the country has ethnic or geographic divisions. Nothing of that sort has happened. Yes, the country has had a divisive civil war going on for the last six years, but all their original ethnic groups, all the religious faiths and sects – Shiites, Alawites, Sunnis, Yazidis, Assyrians and others claim they want their country in one piece. Syria was a beacon of religious tolerance before the Assad family. Hafez, the father, and later Bashar, the son, became the puppets of Iran and Hezbollah. Every group, including the Syrian Kurdish tribes, want their united and unified country back.

Many people were surprised to learn that the United States military has created 10 bases throughout the PYD- and YPG – (or with their new name Syrian Democratic Forces – SDF) held areas in northern Syria. In the words of the VICE News channel, the U.S. was “pissing off everyone” because it was caught with its proverbial pants down when it was seeking “to create a large, semi-independent statelet in northern Syria.”

The American government found this information leak objectionable. AA is a capable news outlet with dozens of reporters and stringers in Syria. And as Presidential spokesman İbrahim Kalın said, the Turkish government did not leak any information to the agency. At least five of those bases were already known before AA’s infographic.

If we are going to talk about the objectionable behavior of certain allies, let’s start with the arming and training of the Turkish PKK terrorists in Syria. Let’s talk about the weapons and ammunitions delivered to the YPG in Syria and confiscated in trucks in southeastern Turkey. Let’s talk about the leader of the coup bid in 2016, who are still residing in Saylorsbourg, Pennsylvania. He has not been extradited in spite of tons of legally admissible evidence, and he is still able to run his terrorist cult. Apologists keep telling us that it is a very complicated process that has legal aspects as well as political issues. Yes, Turkish people understand that. But we know for a fact that neither the former President Barack Obama nor President Donald Trump’s administrations have opened the cover of those dossiers yet. Should we be talking about the extradition of a drug kingpin, the United States would have bundled and delivered him in an instant.

Turkey and the U.S. are allies. But the name United States, or as Turks affectionately call it, “Amerika,” always banded together with the words friend and ally. Ask any former U.S. ambassador who served in Turkey. Ask any Peace Corps returnee. But no more. What the U.S. did to Turkey in Syria has not even been done by its enemies.

All this reluctance in returning Fetullah Gülen and his cronies to Turkey and preventing him from using his empire against Turkey, alone, could make Turkish people regret the good feelings they had for the United States. Not taking sides with Turkey in its fight against Daesh in Syria and training and arming PKK derivatives was not palatable for the Turkish people. On top of it now we learned that our friend and ally the U.S. is providing physical protection to them in areas not related to the fight against Daesh.

And we find it very objectionable, if you catch my drift.

*Hakkı Öcal is a columnist at both Daily Sabah and Milliyet newspapers based in Istanbul. He is also advisor to President of Ibn Haldun University