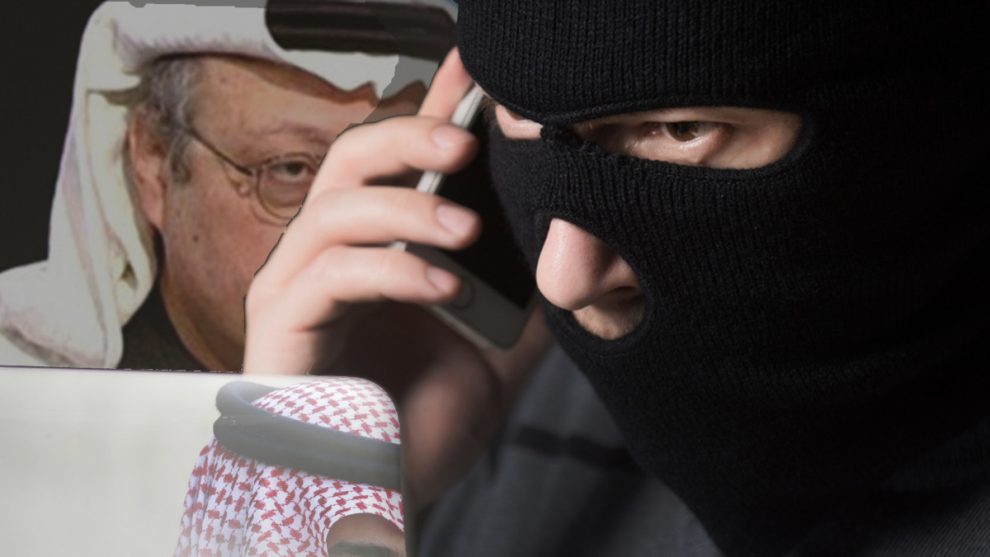 Nobody can hold a candle to Western journalists when it comes to the media ethics. First, let’s look at Jim Geraghty of the National Review online, who we are familiar with in Turkey because he posted his blog for a long time from Turkey, where he lived as an expatriate.

He titled his latest post “The Compromising Background of Jamal Khashoggi’s Work.” After paying the usual lip service to the fact that his murder was brutal and an outrage, Geraghty warns the Saudi regime that they have to endure “some short-term consequences” from the U.S. government so that they wouldn’t pull “a reckless stunt like this again.”

But wait. If you think calling asphyxiating someone in a consulate building while he is squirming and screaming, then dismembering his body into small chunks with a bone saw that a forensic expert brought with him from Riyadh to Istanbul “a stunt” is disgusting, you need to keep reading the rest of the blog.

“[…] It is now clear that the narrative around Khashoggi’s work as a columnist that was reported immediately after his death was not entirely accurate. […] For starters, he was the odd sort of regime critic who sought funding from the regime he criticized.” You may think that the regime and the journalist who was trying to fleece the regime could not agree on the amount of the payment and people representing the regime pushed him too hard and he died.

According to The Washington Post, the late Khashoggi asked the Saudi government to provide partial finance for the think tank he was hoping to establish in Washington, D.C. The Washington Post reporters, Souad Mekhennet and Greg Miller, wrote that they reviewed the copies of the messages Khashoggi sent to the Saudi ambassador about this request. When were the messages sent (if there really were messages sent by him, if what the Washington Post reporters saw were authentic messages by Khashoggi)? In September 2017. Five months after Mohammed bin Salman (MBS) was appointed as the crown prince. When did MBS start arresting his uncles and nephews? In November 2017. Khashoggi was anything but a carpet-flying fortune-teller. MBS had led several successful reforms and was internationally praised for his strides towards the social and economic liberalization of his country. He had not started his terror campaign and neither Khashoggi nor anyone else could predict that in a short while that the Saudi palaces and luxury hotels would have turned into torture dungeons.

Yes, Jamal Khashoggi was critical of the regime, demanding more reform in the political arena. But he was not an enemy of the kingdom. Let’s assume for the sake of the argument that he sought monetary support from the Saudi government or (as the Washington Post article claims) from the Qatar Foundation International which supports Arabic-language education in the U.S. Does this make “Khashoggi look less like an independent journalist and more like an agent of another country that was, if not an enemy of Saudi Arabia, then certainly a rival”? The Qatar Foundation is a cultural organization and his seeking its support for an educational enterprise wouldn’t make Khashoggi “an agent.” Now the whole wide world knows that Khashoggi had been playing a leadership role in promoting educational opportunities for many young Arab journalists in many Arab countries as well as in the U.S.

What is the implication of looking “less like an independent journalist” in Jim Geraghty’s world? A well-deserved smothering and a bone saw? No wonder he calls it “a reckless stunt.”

If Geraghty had spent his time in Istanbul studying the Ottoman and Arab traditions of opposing government figures, he’d better know that one could be opposing the Ottoman sultan, an Arabian sheikh, or an Egyptian governor but still get a salary from the state. The Ottoman sultan sent his Grand Vizier Midhat Pasha to exile in Syria after the pasha turned against him as the governor. Many poets, playwrights and university professors, for example, fled to Paris or London during the second Constitutional Era of the Ottoman Empire with the checkbook the government put in their pockets.

And we thought Edward Said had driven a stake into the heart of the Orientalism! Were we wrong? This will never change: Once an orientalist, always an orientalist: judge everybody in a stereotyped way with your colonialist attitude.

Let’s review the facts about the Jamal Khashoggi murder once again.

On October 2, 2018, he walked into the Consulate General of Saudi Arabia in Istanbul. He did not come out. He was there to pick up some papers necessary for his forthcoming marriage and his fiancee was waiting outside. She called the police, and, in no time, the whole world learned that he was killed inside the consulate. Saudi authorities tried to deny the killing for almost a week. Some Reuters journalists toured the six-story consulate. Saudi Arabia’s consul opened up his mission four days later in an effort to show that the prominent Saudi writer Jamal Khashoggi was not on the premises and informed the reporters that the talk of his kidnapping was baseless.

Turkish officials, on the other hand, said they believed Khashoggi remained inside the consulate, and prosecutors had begun an investigation into his disappearance. Saudi Arabia insisted all week long that he had left the consulate on Tuesday after completing his paperwork. Saudi authorities did not allow the police and prosecutors to enter the building for two weeks.

President Erdoğan made his first public announcement on the case 20 days later and said Turkish authorities had obtained enough information about the killing. “A game is being played to protect someone involved in the murder,” Erdoğan said. He said he had shared information with the German chancellor, Angela Merkel, and the French president, Emmanuel Macron, during his meeting with the two European leaders. According to media reports, a 15-man team of experts arrived in Istanbul after the murder, mainly forensic experts and veteran policemen (one with a bone saw) to clean the premises and get rid of the body.

Following Erdoğan’s remarks, that were interpreted as a sign of the information that the Saudi crown prince MBS could be involved in the murder, the Saudis changed their story to accept the murder was premeditated but claimed that the 15 Saudi officials who went to Istanbul acted without the crown prince’s authority or knowledge. The Saudis claimed that they were under investigation in Saudi Arabia, along with three other senior figures, including the deputy head of intelligence.

Meanwhile, in the U.S. media, some of the crown prince’s admirers kept saying that it was inconceivable that this charming prince could be responsible for such barbarity. President Trump insisted that he has reached no conclusions about what happened.

The U.S. Senate, passing a resolution two months later, condemned MBS for the murder of journalist Jamal Khashoggi, increasing pressure on Trump to find out exactly what had happened. Despite the fact that the president aligned himself with the prince, several news outlets reported the following week that the CIA concluded the crown prince ordered the columnist’s assassination. CIA officials had high confidence in their conclusion, which is based on multiple sources of intelligence, The Washington Post and The New York Times reported.

Then, a chorus started to cast doubt over the credibility of the CIA report. A former head of Saudi intelligence (the crown prince’s uncle), Turki al-Faisal, said “The CIA had been proved wrong before,” so it could be wrong again. Our Jim Geraghty wrote “Khashoggi looks less like an independent journalist and more like an agent of another country that was, if not an enemy of Saudi Arabia, then certainly a rival.” Saudi Foreign Minister Adel al-Jubeir (who was sacked by the King later) said calls for MBS to be held accountable for the murder are a “red line.”

Why did these otherwise credible people try to protect this charming reformist future king of Saudi Arabia? Definitely not because he is a lovable teddy bear with a winning smile and allowing Saudi women to drive on public roads. All these and his readiness to recognize Jerusalem as Israel’s capital, his being the “best friend” of Jared Kushner and his wife (and Trump’s daughter) Ivanka, or as the Israeli media put it, being the Arab the Jews have been waiting for the last 70 years. Now the U.S. and Israel are not ready to throw this man to the lions.

If one is reading the statement that Khashoggi was looking “less like an independent journalist” under the light of this chorus than one can conclude that he was “living by the sword?” Eh, Jim?