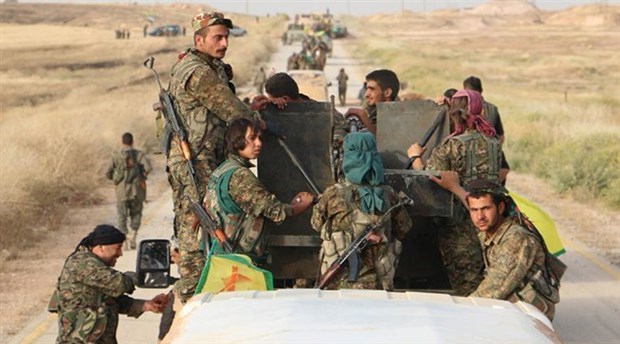 The PYD/PKK terrorist organization has become a major threat to Turkey by occupying the majority of the adjacent Syrian region border.

Terrorists present in Afrin, Syria — along the border — also pose a threat to Turkey’s border cities, as well as areas liberated by the recent Operation Euphrates Shield and the Idlib de-escalation zone.

It also has the potential to be a stepping stone for the terror group to reach the Mediterranean with the support of the U.S. Afrin, situated in northwestern Syria, is one of the biggest districts in Aleppo, Syria.

Afrin, which also borders Hatay and Kilis, Turkey’s Syrian border provinces, is a gateway to the Amanos Mountains, also known as the Nur Mountains.

Afrin has emerged as a hideout for the PYD/PKK since 2011, when anti-regime movements started in Syria, followed by the current civil war.

In time, the terrorist group’s presence in Afrin gained power with support from the Assad regime and Russia’s tactical aid, along with U.S. backing east of the Euphrates River.

The terrorist group, growing rapidly with U.S. military support, has seized 65 percent of the area of the Turkish-Syrian border.

The Afrin Mountains in Syria, which are extension of the Amanos Mountains in Hatay, Turkey, serve as a natural protection for the district.

Their physical dominance has also enabled the PYD/PKK to include all of Kilis’ provincial center and a considerable part of Hatay — both in Turkey — within their range of fire.

Terrorists often attempt to penetrate the Afrin Mountains. The PYD/PKK is continuing its attempts to support terrorism in Turkey by smuggling militant, arms, and ammunition from Syria to Turkey.

According to security sources, anti-tank weapons, rocket launchers, heavy machine guns, Kalashnikovs, and U.S.-made M16 infantry rifles are among the arms leaked from the Afrin Mountains to Amanos.

Stepping stone for reaching the Mediterranean

The PYD/PKK has seized the border region with intense support from the U.S., from both land and sea.

While spreading across the region, it became the terrorist group’s biggest aim to access the Mediterranean.

The PYD/PKK wants to become a state and in the future get direct help from the outside world.

Afrin is thus a stepping stone for the PYD/PKK, which, starting at the Syrian-Iraqi border, would proceed to the Mediterranean via the Syrian-Turkish border.

With the successful Operation Euphrates Shield, which ended in March 2017, Turkey erected a partial barrier to the terrorist group making an east-west connection.

However, the group still has access from the Iraqi border region to Afrin via its multidimensional relations with regime leader Bashar Assad.

Afrin is located on the western edge of the region covered by Operation Euphrates Shield, which the Turkish Armed Forces carried out with the Free Syrian Army.

Ahead of Euphrates Shield, in early 2016 the PYD/PKK tried to spread into the area from Afrin with the help of Russia and the Syrian regime.

In June 2015, the group attempted an ethnic cleansing of Tel-Abyad, a district with a large Arab and Turkmen population, after it occupied the district between Haseke and Aynularab with heavy air support from the U.S.

The terrorist elements, spreading out of Afrin, occupied the Tel Rifat district and its surroundings, controlled by its opponents and Arabs.

Both forces opposed to the PYD/PKK and civilians in neighboring Azez are being constantly attacked by the terrorist group.

In recent months, scores of civilians died when the terrorists opened fire from the Afrin Mountains with heavy weapons.

Forces opposed to the PYD/PKK believe that if the Turkish army withdrew from the region, the group would want to seize the Operation Euphrates Shield area by gaining ground in Afrin.

Thus, the terrorist group aims to link the Euphrates River area in the east to Afrin in the west.

Idlib stands as a barrier to the PYD/PKK, which wants to advance to the Mediterranean.

The establishment of a de-escalation zone in Idlib, under the control of opponents of the PKK/PYD and anti-regime forces, conflicts with the terror group’s interests.

Idlib falls within a network of de-escalation zones — endorsed by Turkey, Russia and Iran — in which acts of aggression are expressly prohibited.

The Assad regime believes the PYD/PKK might proceed to the Mediterranean via the Afrin-Idlib area if the resistance was broken after Iran-controlled forces and Russia clashed with anti-regime groups in Idlib.

Thus, the group was disturbed when the Turkish army established observation points in Idlib, western Afrin.

It has constantly attacked Turkish army elements since they started reconnaissance for the observation points.

When Turkey launches an operation into Afrin, the security and operation of these observation points would be ensured.

With a possible operation into Afrin, Turkey also aims to enable civilians who fled Tel Rifat and adjacent areas to return to their homes.

During the PYD/PKK’s occupation of Tel Rifat, 50,000 Arabs fled to Azez.

The group continues its activities, including arbitrary arrests of civilians and recruitment by force in Tel Rifat.

If the U.S. plan to form a border army is fulfilled, and nationwide clashes are suspended, the PYD/PKK would claim a large share in the new administration, with its armed presence growing stronger.

On the other hand, the U.S. military presence — which is integrated into the terrorists east of the Euphrates River — is absent in Afrin.

Thus, this makes the terrorist group more defenseless in the face of a possible Turkish operation into Afrin.

“Olive Branch” Paris Position: Reticence and Opacity
Does the private sector have a role in helping Syrian refugees?
Comment