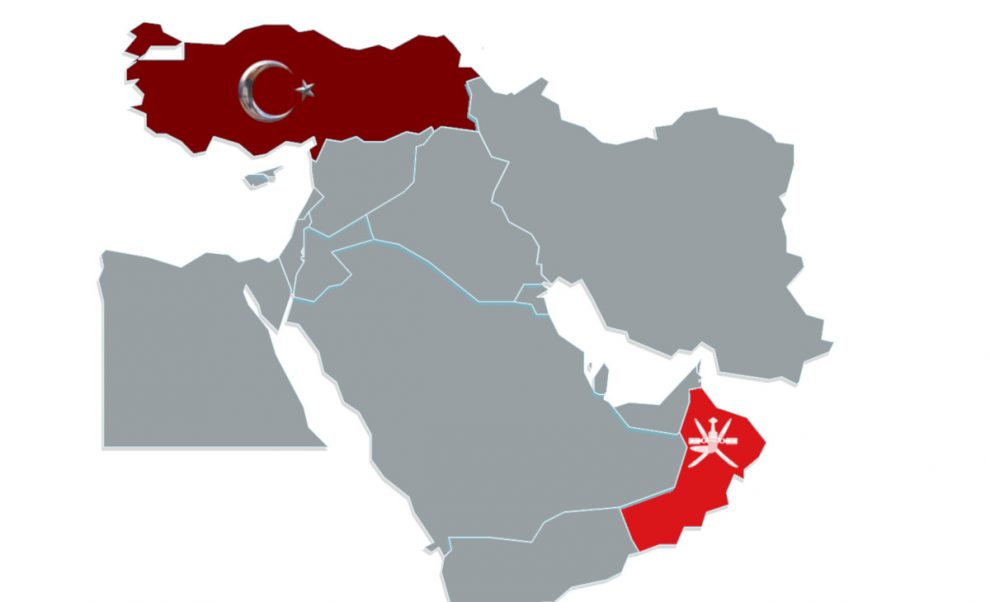 Omanis and Turks have historic relations dating back to the 16th century when the Ottomans sought to counter Portuguese influence in the Indian Ocean. Yet it was not until 1973, three years after Sultan Qaboos took power, that the Sultanate of Oman and Republic of Turkey established official diplomatic relations. Ever since, bilateral ties have been stable and smooth, but never too strongly developed. Over the years, Muscat and Ankara have focused primarily on economic, as opposed to political, factors in their relationship. Official visits at the highest level have been rare. The Sultan of Oman’s only visit to Turkey was in 1989, while only two Turkish presidents have visited the Sultanate – Suleyman Demirel and Abdullah Gul in 1997 and 2010, respectively.

Demirel once said that Turkey values its friendship with Oman greatly because “the Sultanate’s foreign policy is constantly clear and straightforward”. Although this clarity has helped the two governments understand each other’s positions on a regional level, this advantage has never led to upgraded bilateral relations despite officials in Muscat and Ankara frequently expressing an interest in further developing their friendly ties.

Political relations between the two countries at the foreign minister level have been inactive over the last 11 years. But in contrast to the political relations, the volume of bilateral trade between Turkey and Oman has increased 10-fold within a decade from $23.8 million in 2003 to $321 million in 2012, reaching an unprecedented record of $592 million in 2014 before witnessing a sharp decrease to $293 million in 2016. Given Oman’s economic heavily dependence on oil and gas, the fall in oil prices can be seen as the main reason behind this setback. Yet, taking into consideration the huge untapped potential on both sides, the current volume of Omani-Turkish trade seems insignificant.

When it comes to the construction and contracting industries, there is a different story to tell. Oman is considered an important Gulf market for Turkish contractors. The Sultanate comes fourth in terms of number of contracts awarded to Turkish companies out of all Gulf monarchies. By 2013, leading Turkish construction and contracting companies were carrying out around 44 projects in Oman with a total value of about $5.5 billion.

In 2011, Turkey and Oman signed another MoU on military cooperation. One year later, Muscat showed interest in buying defense products from Ankara before renewing the same military agreement in 2013. As this was a valuable opportunity for the Turkish military complex to open up new markets for its products, a team from the Undersecretaries for Defense Industries (SSM) was dispatched to Muscat to discover the preferences of the Sultan’s Armed Forces (SAF).

The year 2017 was exceptional in Omani-Turkish relations. Officials on both sides seemed keen to achieve effective convergence in various fields. In January, a delegation from Turkey’s Foreign Ministry visited Oman to resurrect political consultations which had been inactive for more than a decade. This step signaled a strong desire to push bilateral relations forward on all levels.

To ensure that both sides were on track in terms of boosting bilateral ties, then-Deputy Prime Minister Mehmet Simsek visited Oman in May 2017 and attended the tenth session of the Omani-Turkish Joint Committee. The Turkish delegation focused on cooperation in tourism, healthcare, logistics, agriculture, fisheries, mining, banking, and other sectors.

Two months later, Turkey’s “FNSS Savunma Sistemleri A.Ş.”, one of the country’s leading defense manufacturers in terms of armored combat vehicles and weapon systems, delivered its first PARS III 8*8 armored vehicles to Oman. Under the contract, signed in November 2015, the Turkish company will deliver 172 armored vehicles PARS III 6×6 and 8×8 chassis in 13 variants to the Omani armed forces by 2020.

On October 28, Turkey’s Foreign Minister Mevlut Cavusoglu visited Oman to prepare the grounds for the third ever visit for a Turkish President to Sultanate. The visit aimed to give the bilateral relations the boost it has always lacked and was supposed to happen before the end of that year. However, due to compelling circumstances, Omanis asked for the visit to be delayed.

To ensure that Oman occupies an important place in Turkey’s Gulf foreign policy agenda, Ankara chose Ayse Usluer, the Head of the International Relations Department at the Presidential Office, to become its new ambassador to Muscat. Usluer officially assumed her new position in August 2018 and became Turkey’s second female ambassador to be appointed to a Gulf Cooperation Council (GCC) state.

These important developments in Ankara-Muscat relations came at a time in which the Gulf region was witnessing an unprecedented crisis that became a major geopolitical gamechanger for the grander Arab/Islamic world with major implications for both Oman and Turkey.

After the GCC crisis erupted, Ankara rushed to Doha’s help while strongly calling for an end to the blockade and a solution to the problem via peaceful dialogue and negotiation. As Doha was extremely vulnerable, Ankara immediately established an air bridge to help Doha override the blockade imposed by the Saudi/UAE-led bloc. However, Turkey alone could not enable Qatar to sustain the blockade, so Doha turned to Tehran and Muscat too.

Even though Oman is generally keen to remain neutral amid regional crises, the Sultanate helped Doha circumvent the blockade by opening its skies and ports (Sohar and Salalah) to the Qataris. Doha shifted from relying on Dubai’s Jebel Ali Port to Oman’s Sohar. Thus, Sohar witnessed a significant increase in cargo volume within three months, and Omani-Qatari trade skyrocketed by two thousand percent in the same period.

The GCC crisis is driving a regional orientation with new types of interdependencies between Turkey and Iran; Iran and Qatar; and Qatar and Oman. Within this context, it would not be surprising to see both Turkey and Oman push to enhance their political, economic and military relations at the bilateral level, which could pave the way for a kind of quadruple arrangement to be formed. However, such a step would likely meet opposition from some regional and international players, especially the U.S. while President Donald Trump remains in the Oval Office, as well as Saudi Arabia, the UAE, and Egypt.

Oman already has good relations with Iran, but as the GCC falls apart, enhanced relations with Turkey can serve Muscat’s interests in hedging alliances, as other Gulf countries like Qatar and Kuwait have skillfully done. As one report suggested, Riyadh and Abu Dhabi might attempt to further utilize their influence to bring the Sultanate closer to the Saudi/Emirati fold. For Oman, more vibrant relations with Turkey could be a chance to further diversify its relations with regional powers, fortify its geopolitical position, and sustain its internal stability amid Riyadh and Abu Dhabi’s increasingly unpredictable and aggressive policies, most recently highlighted by the Saudi-Canadian diplomatic spat.

On the economic level, Oman needs to diversify its economy away from oil and gas and has a similar need to reduce its dependence on the UAE as an economic partner. The GCC crisis may have been a golden economic opportunity for Muscat on the tactical level. But enhanced economic relations with Turkey can meaningfully serve its purposes in the long run, especially as Oman’s relationship with Iran raises questions about the implications for the Sultanate’s relationships with other GCC states and the Trump administration.

For Ankara, the problematic GCC crisis may have done some additional damage to Turkey’s relations with the blockading countries, but the dispute may also create new opportunities. Oman’s geopolitical position can serve as a gateway for Ankara to huge markets in southeast Asia and Africa at a time in which the Turks are seeking to discover new markets and increase their exports. But whether the two parties will manage to capitalize on the current geopolitical shifts in the Gulf to their benefit remains to be seen.

No, you are not journalists
Feasting on history at Istanbul’s Topkapi Palace Museum
Comment