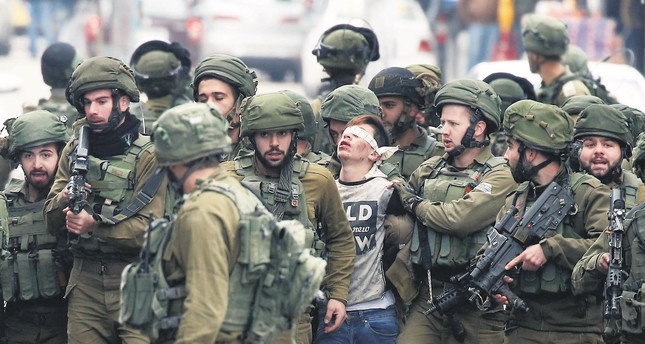 2017’s most symbolic photo is that of Fawzi al-Juneidi, the 16-year-old Palestinian boy, being detained by Israeli soldiers after his protests against Trump’s decision on Jerusalem and Israeli state’s occupation in his land, the West Bank, Dec. 7.

U.S. and EU media’s year-end selections from 2017 are very cliché, as they are representative of their populist culture, while ignoring the injustices happening around the world

The year-end selections of newspapers, television stations and other media outlets usually tell more about the selectors than the subject matter of the selection. A cursory look at all the selections the U.S. and EU media made from the 2017 stories shows that those journalists and editors are living in their own castles on their own high mountains.
Take the selection of the most impressive images of the 2017 that The Washington Post did. The photographs show scenes of the miserable treks of Somali refugees, the scary faces and enormous hats of North Korean officers, pitiful lines of Rohingya people walking along rivers from Myanmar to Bangladesh, the Mexican cops burning mountains of opium poppy harvest in a village, and a heartbreaking picture of young girls laying flowers at the site of the incredible Grenfell Tower fire that took the life of 71 poor people near London – still shrouded in official secrecy.
The collections of The Times of London as well as of New York, The Wall Street Journal, online magazines and blog collections reflect the same worldview of the occidental editors. There is no Palestine issue in their world; no occupied lands of millions of people. Those are people with strange names, anyway! And “it is really difficult to use such harsh words as occupation because they engage in terrorism against the Jewish people.”
In its year-end review, The Splinter News comes to this conclusion:
“This year was, on the whole, extremely bad. However, there were a few good things that happened.” And then the website offers o few good things according to the taste of its editors. Among them are:
Man changes the Hollywood sign to say “Hollyweed.”
The Women’s March in Washington, D.C. drew somewhere between 3 and 4 million Americans.
Fiona the Hippo is born.
Protesters gather at airports across the U.S. to oppose the Muslim travel ban (displayed with a photograph of an Arab girl carrying a sign that reads “We gave you hummus; have some respect.”)
Beyoncé gives birth to twins.
Star Wars: The Last Jedi is released in theaters.
You might ask who the heck is the Splinter News? O.K. Here are the top three photos of the year as selected by a much more mainstream outlet, The Politico Magazine:
The official portrait of first lady Melania Trump was heavily retouched.
Kanye West met with Trump at Trump Tower in New York to discuss multicultural issues.
Jared Kushner and Ivanka Trump leave President Donald Trump’s Mar-a-Lago resort in Palm Beach, Florida.
All these are expensively showily luxurious plush photos of a faux-royalty of a man who jumped from a game show to reality TV of the U.S. presidency. If The Politico doesn’t cut, let’s have a look at the images collected by the editors of The Guardian newspaper in London:
A seahorse grabs on to plastic of a cotton swab in the sea in Indonesia.
Southern California wildfires.
A scene from Notting Hill carnival, which is basically a huge paint, chocolate and flour-fight.
Refugees from a capsized boat off Lampedusa, Italy.A man driving his truck into anti-far-right protesters.
A blaze engulfs Grenfell Tower in London.
Twenty-five such images with rhinos, street dancers, water-park swimmers, riot polices from several countries, fire fighters, and marching women. All good, all expressive, all-important scenery from the unjust, unequal and still joyous world of ours.
What is not included among these were the injustices befalling the Muslim people. For instance that iconic image of Fawzi al-Junaidi, the beaten and bruised 16-year-old Palestinian boy who was held in anIsraeli jail more than a month. Fawzi was photographed, blindfolded and surrounded by more than 20 Israeli troops in the occupied West Bank city of Hebron, was charged with throwing stones at a group of soldiers. When he was released from prison, he was rushed to Ramallah hospital, and it turns out that his right shoulder was broken.
He will be in the court on Jan. 14 and Western editors will throw his pictures into the pile of discarded photos.

Facebook Says It Is Deleting Accounts At The Direction of The U.S. and ISRAELI Goverment
Normalising the far right in Austria
Comment