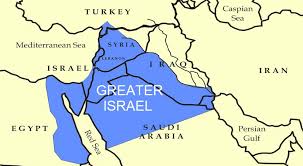 The Jewis state did not involve in the Northern Iraq Referendum as it was in the Gulf War.However,as in the Gulf War,this referendum has a huge impact.Today,Israel is the only force that supports the establishment of a Kurdish state in the Middle East.The Jewish state has been and continues to coorperate with the Kurds,to provoke and help them after the establishment of Israel.

One of the basic ideas that the Jewish ideology imposes on Israel is the concept of ‘Promised Lands’. Maps showing the terrestrial borders of the Israel lands have entered books, atlases in the country and are taught in schools. So, it is not a phenomenon of water and air.

As a result,from whichever aspect you look at Israeli politics, what doesn’t change is that the only purpose is to conquer Promised Lands. Regarding to importance of Kurdish state for Israel, the target is to establish a second Israel so that they can establish a base right next to the lands to be taken from Turkey and Iran for Greater Israel.The goal is to first surround Turkey and Iran from the borders of Syria and Iraq and then establish artificial statelets.

We are sure that this so-called Kurdish State won’t be established by Kurds but by ABD/ISRAEL. When we listen to American and Israeli politicians, they say a Kurdish state is necessary to fight opposing regimes. Hence, the core goal is not to grant independence to Kurds but to protect American-Israeli interests.

As for Barzani, Israel’s main ally in Nothern Iraq is Barzani family. It’s a fact that Barzani was/is in secret relations with America and Israel via intelligence services. So, it is not surprising that Israeli is the sole supporter of a Kurdish state. Since Israel’s aim is clear, KRG is just a tool to fulfill their plans.

That is why Turkey and Iran were so furious to referendum. They know well the next step and, so, they oppose Barzani’s move. Still there is a chance for Barzani to turn back from this wrong path but it seems he is firm in continuing on his insistance. The problem is that the consequences will hurt all of us.

Anyway… We can bear this pain, too. Yet, such actions will be a catastrophe particularly for Barzani. He may even loose what he has now. Let’s wait and see.