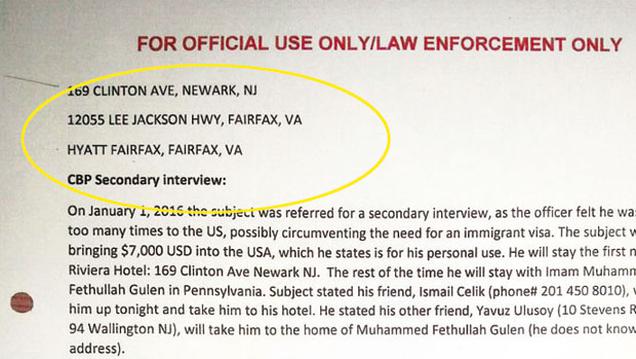 Kemal Batmaz was the second organizer of last year’s coup attempt after fugitive Adil Öksüz. Security camera footage from Atatürk International Airport in Istanbul captured Batmaz and Öksüz returning together from the United States two days before the coup attempt. More damning footage also showed officers saluting Batmaz as he walked passed them at Akıncı Air Base in Ankara on the night of the coup attempt. These recordings unmistakably show that Batmaz was a senior member of the Gülenist Terror Group (FETÖ).

When Batmaz was apprehended, he claimed, just like Öksüz, that he was at the base to look for a plot of land to buy. A former manager of Kaynak Kağıt, a paper company that was part of the FETÖ-affiliated Kaynak Holding conglomerate, Batmaz started up a real estate business in 2015, but interestingly, did not lease or sell property since it was founded. Evidently, it was a front company only to hide his role in FETÖ.

Despite all of this, Batmaz has claimed that the person captured on video was not him and he does not know FETÖ leader Fetullah Gülen. After he was detained, during his interrogation Batmaz said: “I know Gülen from what I’ve seen in media only. I have never met him. [FETÖ] started as a sincere organization, but in time it became secular. I started to see it as a criminal organization in 2015, and now I see it as a terrorist group. Gülen is the head of this terrorist group. I had no involvement in the planning of the coup attempt and I’m not a member of the group.”

A document sent from the U.S. Department of Homeland Security to the Turkish Security General Directorate provides solid proof that the coup attempt was organized by FETÖ. Batmaz went to the U.S. with a transfer flight from the U.K. six months before the attempted putsch. So, the records from Turkey only show that he went from Turkey to the U.K. After his plane landed in New Jersey’s Newark Liberty International Airport instead of New York’s John F. Kennedy International Airport due to bad weather, a U.S. Homeland Security officer questioned Batmaz on his frequent entries into the country.

“On January 1, 2016 the subject was referred for a secondary interview, as the officer felt he was coming too many times to the U.S., possibly circumventing the need for an immigrant visa. The subject was also bringing $7,000 into the U.S., which he states is for his personal use. He will stay the first night at Riviera Hotel: 169 Clinton Ave Newark NJ. The rest of the time he will stay with Imam Muhammed Fetullah Gülen in Pennsylvania. Subject stated his friend, İsmail Çelik (phone# 201 450 8010), will pick him up tonight and take him to his hotel. He stated his other friend, Yavuz Ulusoy (10 Stevens Road Apt. 94 Wallington NJ), will take him to the home of Muhammed Fetullah Gülen (he does not know the PA address).”

It is quite evident that Batmaz, who insistently denies his affiliation with FETÖ, has ties to Gülen. This evidence that was revealed thanks to the cooperation of U.S. authorities with the Turkish authorities provides Turkey with a great opportunity to explain its problems with FETÖ to the world.