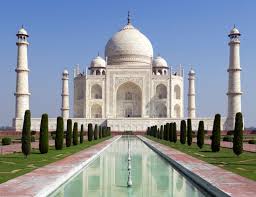 The Taj Mahal has been dropped from a list of tourist attractions by India’s Uttar Pradesh state, according to local media reports.
A new booklet issued by the state’s Hindu nationalist Bharatiya Janata Party (BJP) government features the temples of Mathura, Ayodhya and Gorakhpur while ignoring the world famous Mughal-era monument in Agra.
The 17th century mausoleum built by the Mughal emperor Shah Jahan in memory of his wife Mumtaz Mahal remains India’s top tourist destination.
India’s tourism industry heavily uses the Taj Mahal in its destination marketing campaigns overseas. But hardline Hindu groups see the monument as a “cultural” affront to their worldview and religion-based nationalism.
An Uttar Pradesh minister, however, has clarified that there was no attempt to remove the Taj Mahal from the Indian tourist map.
“Taj Mahal is our cultural heritage and occupies a place among the world’s famous tourist places,” tourism minister Rita Bahuguna Joshi was quoted as saying in the media on October 3.
Referring to the booklet released on World Tourism Day in the state capital Lucknow, an official said earlier that it was not a “compendium of tourist attractions in UP” but a book highlighting the works done by the current government and the development projects it planned to take up.
There have been controversies involving the Taj Mahal before, mostly inspired by the groups championing the cause of Hindutva.
Uttar Pradesh chief minister Yogi Adityanath, a temple priest-turned-politician, recently suggested the Taj Mahal did not represent “Indian culture.”
“Foreign dignitaries visiting the country used to be gifted replicas of the Taj Mahal and other minarets which do not reflect Indian culture,” he said at a public meeting in June.
Some hardline groups go the extent of claiming that the monument was originally a temple.
Writers, researchers, bureaucrats, politicians and opinion makers associated with Hindutva groups promote literature that seeks to undermine history with an alternative view to promote Hindu “cultural revival”.
Mughal monuments standing tall despite their neglect are seen as an eyesore by those who try to impose their sectarian nationalism on everyone, ignoring India’s great religious, ethnic and linguistic diversity.