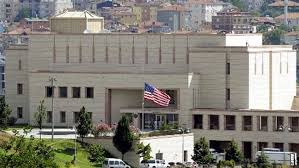 John Bass, the United States ambassador to Turkey who acted like a General Governor during his 3-year post, has left Turkey to begin his new post in Afghanistan. We won’t remember him with good memories since he continuously worked against Turkey.

When FETO members attempted failed July 15 coup he was the ambassador. When number one  head of coup attempt, Adil Oksuz, escaped, US Embassy tried to access him via numerous phone calls. Calling FETO members was an usual thing for US consulates as per revealed documents. One day before John Bass conducted a press meeting last Thursday, Turkish police arrested a US consulate staff because of his connections with top FETO members. US Embassy, so does Mr. Bass, reacted the arrest strongly and argued charges were baseless.

However, though the ambassador denies, evidences made it quite clear that Consulate staff, Metin Topuz, was actively assisting FETO members and mediating between the US Istanbul Consulate and some FETO members, fugitives currently. Nevertheless,  Ambassador Boss insisted that his employee was innocent despite so many clues.  In addition to condemning detention, Mr. Bass caused another scandal by cancelling invitation of Sabah newspaper’s columnist, Mrs. Hilal Kaplan. While she was about to leave from home for participating Bass’ press meeting, someone from US Consulate called her and informed that she should not attend the meeting due to Sabah’s headline that uncovered US Embassy- FETO relations.

What was weirder was that Mr. Bass underlined press freedom during the meeting. When asked why he didn’t allow Mrs. Kaplan to participate, he claimed they ( Sabah and Mrs. Kaplan) were not doing journalism but just writing fictions. If Mr. Bass is right, here comes the question; If Sabah is doing something different than journalism, why did he invite Mrs. Kaplan to his farewell event?

Another question also comes into our minds; Why is Mr. Bass so furious and using an undiplomatic langue which is rough? There are a few answers to this question. One is that his duty in Turkey has just ended. Therefore, he won’t be condemned for his thoughts since he is no longer in charge. Second, his  angry reaction may be a reflection of his failure in his post. We know that he sided with opposition groups and worked against Turkish government. In addition, when FETO attempted military coup in July 15 of 2016, he was the top envoy of USA in Turkey. If we believe that America supported the coup, I strongly believe, then, he was in charge of coordinating it on behalf of US government. Hence, not only putschists but also Mr. Bass failed.

Ambassador Bass will be remembered for arrogance as well. His statements that insulted Turkish judiciary was a sign of unrecognition of decisions of Turkish courts. Perhaps, he thought none could arrest a personnel of US Embassy which is liaison of world’s only super power. However, Turkish police did it and, so,he got crazy.

His departure means he won’t be able to do anything about his ex-staff. However, we should be worried about Mr. Bass’ passion and arrogance as he will begin to rule Afghanistan factually. Let’s be optimistic he will be merficul against Afghans but when we recall his personal policies he pursued in Turkey, we’d better pray for Afghans.

While writing this piece, US Embassy made an announcement stating that it suspended visas to Turkish citizens (Turkey retaliated reciprocally). This decision shows that Mr. Bass is soangry that he can even sacrifice US-Turkish relations. Such a childish attitude of course has different reasons as well. Because US government arms YPG, an affiliate of the PKK, Turkey is quite annoyed. What is more, it still shelters Fetullah Gulen who attempted failed coup together with his followers. Hence, Turkey had to partner with Russia. Yet, US authorities still blame Turkey instead of finding out where they did wrong.

Unless US government  changes its policy against its allies, it will loose all its allies. No country will accept a relationship based on win-loose approach.