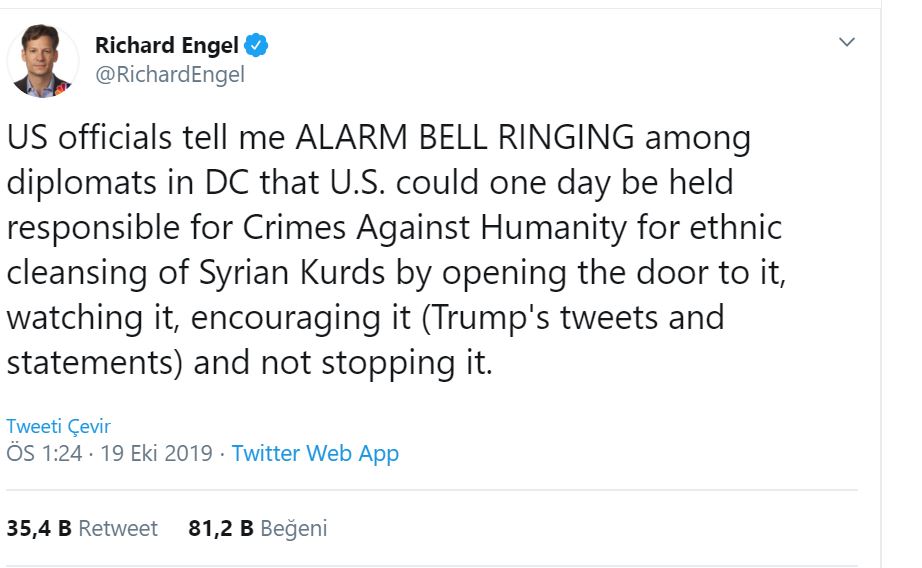 US lawmakers led by senators like Lindsay Graham and Chris Van Hollen continue to put pressure on Donald Trump to reverse his decision about withdrawing US troops from Syria and supporting YPG, which is a part of the PKK, a designated terrorist group as per US laws. While threatening to sanction Turkey for its incursion to Syria to clear terror threat, Senators also invite heads of YPG and show their support in public. Analysts criticize lawmakers for their support to the terrorist organization which is at war with Turkey, a NATO member.

After our meeting with Ilham Ahmed, we’re even more worried about the situation unfolding in northeastern Syria. Right now, Congress must come together to maintain an adequate U.S. troops in Syria, ensure air support, and impose sanctions against Turkey. https://t.co/gY6AZyFqX0

Meanwhile, US media does not hesitate to write fake news in order to victimize the terrorist group. Among them, Lara Seligman went far by claiming that Turkey army used chemical weapons. Yet, her slander was quickly declined by OCHCR.

New: Turkish-backed forces appear to be using white phosphorus-loaded bombs—chemical weapons that can maim and kill when in contact with flesh—in Syria.

On the other hand, many US based journalists shared unconfirmed news beginning with the words “A US official tells me….”. Below are a few examples of twits with fabricated information, whose sources are unknown US officials. Analysts say that such twits are deliberately shared for the aim of black propaganda.

US officials tell me ALARM BELL RINGING among diplomats in DC that U.S. could one day be held responsible for Crimes Against Humanity for ethnic cleansing of Syrian Kurds by opening the door to it, watching it, encouraging it (Trump's tweets and statements) and not stopping it.

URGENT: US official tells me the situation in NE Syria is deteriorating rapidly. US Forces are at risk of being isolated and the risk of confrontation between Turkish proxies and US Forces is high. Extremist Turkish proxies are wearing SDF uniforms and killing civilians. @foxnews

NEW in @AlMonitor: Turkey can now "annex a portion of Syria” and displace Kurds after Pence & Erdogan cut a deal to pause fighting in Northern Syria. “This is what Turkey wanted and [Trump] greenlighted,” a senior US official tells me. https://t.co/R7HsjbfYlb

Just in: US official with knowledge tells me all US troops are out of Manbij.

Turkish-backed forces launched an operation to seize the city from the Kurds (backed by Assad and Russia) just hours ago: https://t.co/adzVPpivJ5

1/ US official tells me Turkish backed Syrian rebels have set up checkpoints on road between Ain Issa and Kobani. We heard gunfire and saw civilians flee. Road closed. Turkish jet buzzed us and US convoy leaving the town.

US convoys departing Syria with majority of American troops have less effective protection from the air because of cloudy weather, a senior US official tells me. https://t.co/0gkXUOMkEI

A US official tells me the troops in northeast Syria are preparing to come home – small contingent of roughly 100-150 at Al Tanf garrison in the south will stay. https://t.co/onoXJ59HmU

Thread by @rcallimachi: "1. A US official with direct knowledge of events tells me that the US has knowledge that Turkey transported Arab mile part of Syria west of Manbij into Turkey, to then cross back into Syria alongside the Turkish military in o […]" https://t.co/5yBrunYaI6

US defense official tells me even after today's convoy into Iraq & the earlier pushes out of the safe zone and out of Manbij, the majority of US forces that have been deployed to #Syria are still there. Another defense official said coalition landing zone in #Kobani still open

Besides US media, some think tanks staunchly attack Turkey and lobby for the terrorist group. Particularly, FDD and its executives known for their Turkey hatred insult Turkey and President Erdogan. FDD is funded by the UAE and serves for the interests of Israel. They are criticized for their radical views, and illegal and immoral relations with thug countries.

I have a better idea. Let’s not invite the Islamist, anti-American, anti-Semitic, human rights-abusing dictator, either. No WH invites for anyone. How’s that sound? https://t.co/YqpUFmQuOm