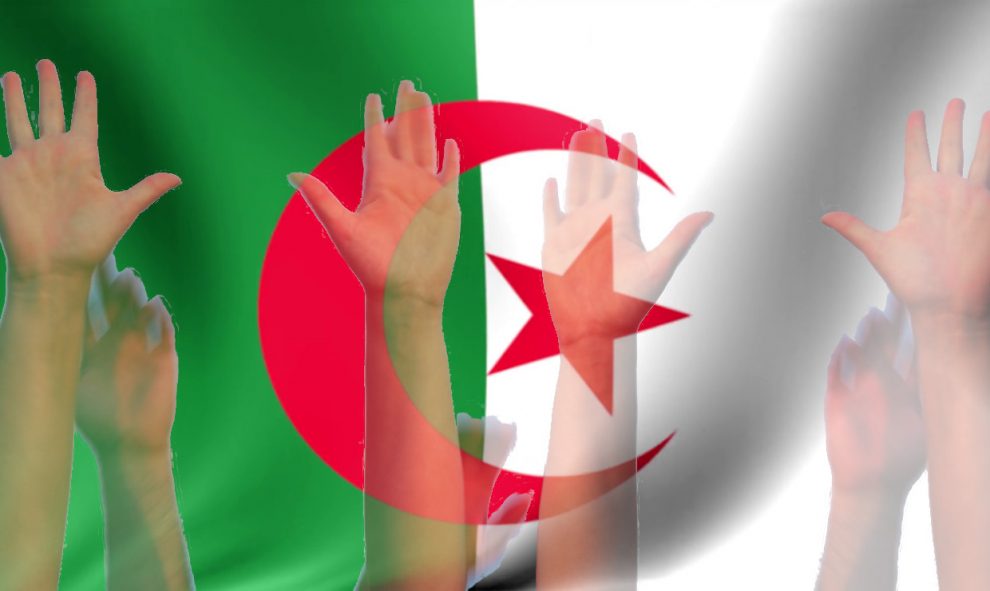 In Algeria, Saïd’s name was firmly rooted as a passe-droit code among a relative consensus of the Algerian regime’s clans

The relation between the Algerian regime, finance, and the powerful business barons of the private sector under the Bouteflika system have pushed many observers and political analysts to draw a parallel with the Italian Mafia in politics, and Algerian media have reported around a dozen businessmen jailed or under investigation all of whom have ties to the Bouteflika clan.

A worrisome comparison to the mafia mobs with some exceptions, the “authorities” under ex-President Abdelaziz Bouteflika administration had somehow to lower their guard towards this occult use of power and abuse of finance, which has people wondering about the Gang of 8 who are in prison since the purge operation led by the country’s strongman General Ahmed Gaïd Salah, Chief of Staff and Vice-Defense Minister.

Unlike in Italy, however, where a real politico-finance system exists based on cruelty and political violence. Whereas in Algeria, Saïd’s name was firmly rooted as a passe-droit code among a relative consensus of the Algerian regime’s clans (the Military, the Intelligence Service, and the ex-President’s clique, minions and business tycoons).

The entire population has been suffering from the ramifications of these clans’ networks in terms of toxic loans and phantom economic projects. A criminal network woven like a social web in the Hirak’s angry lexicon: the “gangsters” emerging against the yuppy middle-class, living with high “bourgeoisie” standards in the country’s large coastal city suburbs, Algiers, Oran, and Annaba.

Yet, the cloudy relation with the political milieu and its lords still is the Achilles’ heel in the power struggle equation of the Algerian regime since the 1962 “hot Summer.” Historically, the regime through the FLN Party and its satellite organizations à la Soviet was regarded more as an instrument of governance of State affairs.

Under ex-President Bouteflika a system developed that profited both locally and abroad, escaping fiscal accountability and impunity with the end of the welfare State under General-President Zeroual’s administration led by his Premier Ahmed Ouyahia who caved in to all the IMF policies. His unjust policies pushed the vulgarization of real “politico-gangsters” that destroyed the existing middle-class and further impoverished the people.

General Chief of Staff Gaïd Salah finally demystified the “G” word calling his two sworn enemies of ex-President’s Bouteflika lords’ system, Saïd and Toufik, “Gang.” Even though three months ago, nobody dared to use the ‘G’ word publicly, even the so-called private media; the term Mafia, however, was on every Algerian’s tongue to describe the political circles and the regime’s henchmen. This was totally absent from the public debate because of lack of proof and depth investigation on one hand, and fear of retaliation from the regime’s political police.

This illustrates the links between the political arena and the new Mafia. Because if the second interferes in the business of politics, it has been banalized in the last fifteen years in the local elections and Parliamentary elections. What was described by the voters as s-Hab a-Ch’karaliterally imploded the use of political exercise practice and made local politics looks like the Sopranos.

Consequently, this Mafioso comportment has influenced politics and has pushed decent elite and politically active men and women to stay away from politics because they are afraid to be seen as corrupted and Algerian Mafia’s agents. While the new Mafia has not resorted to any physical violence and weighs mainly on the electoral polls as in the Red decade, it acted infamously on the assassination of President Mohammed Boudiaf while addressing a public meeting in Annaba on June 29, 1992.

This act was the instigating spark of political violence in Algeria within the Military regime’s main pivotal players in the after math of the January, ’92 coup, the ban of ex-FIS, and the annulation of the democratic process — in 1993 Colonel Kasdi Merbah, the Algerian regime’s “black box” holder who served as President Chadli’s Premier in post-October 5th, ’88 riots, was the Intelligence Chief of Presidents Boumediène and Chadli and commanded the fearful SM Intelligence Service. Cynically the Algerian opponent elite and politicians called it “Sports & Music.” He was assassinated in a car ambush east of Algiers in August,1993.
pic

In 1999 Mr. Abdelkader Hachani, a leading figure of the ex-FIS Party, was assassinated in Algiers. At that time the Generals were not acknowledging the monopoly of the “legitimate” violence of the State,and their clan refused to rely on political dialogue to solve first their internal conflicts; to the contrary, they persisted in defending their own system with the complicity of the fundamentalist Secularists and corporatist feminists. Meanwhile, the Generals’ gangsters were terrorizing the population in the rural areas in the suburbs south of Algiers in the so-called “triangle of death” in the fertile lands of the Metidja Plain’s villages, Sidi-Moussa-Bougara-Larba’a.

The recourse to this political violence and the appearance of the dirty money at first in the hands of the terrorist Emirs, and later to those who were pardoned by the ex-President Abdelaziz Bouteflika, allowed the emergence of a new political entity to control in a panoptical way, therefore, according to Foucault theory.

This domination, though, turned the oligarchs into partially institutionalized “soft” gangsters and largely influenced the activities of the local collectivities. This began with the birth of the al-Khalifa Group and the appearance of Algeria’s “golden boy,” Rafik Khalifa, earlier in 2000. Later al-Khalifa Group was dismantled and new oligarchic families were born whose supporters entered politics and proposed to the candidates of the local regime’s twin (FLN-RND) to finance their campaign or an electoral obtaining and controlling business projects with the complicity of the State’s regional officials like the Walis and sub-Walis of the country’s large cities.

Certain courageous local political officials and activists, however, paid a heavy price for their political career because of their determination to denounce these financial abuses and the political mafia practice. Some public lands have changed hands, others have been transformed into second homes or into small private ranches like the Plateau of Oualed Fayet, and subdivisions have taken shape on individual or collective farms. Many illicit constructions, too, were erected on the fertile western plateaus of Algiers in Baba-Hassen, Oualed Fayet, and Souidania.

Nevertheless, these urbanist aggressions did not hinder the basic activity in 2006.  However, the Mayor of the seaside city of Zéralda, Mr. Djouadi, spoke out on this thorny issue which drained both resources for the municipality and jobs for the unemployed workforce. According to Mayor Djouadi only activities related to agriculture were appropriate in order to preserve the vocation of the municipality and avoid the disastrous experience of other rural communities that had been invaded by concrete.

As a result, he was arrested by the State’s authorities and was himself unfairly accused of corruption; his crime was to touch on the west coastal business arenas of the nouveau riche’ children whose “hang-out” base lay in the municipalities of Staouali and Zéralda.

Another urban massacre was taking place through a fictive real estate company on the upper hills of the capital’s south side under a clearly immune real estate empire run by Mr. Kamel Chikhi, a meat merchant know as the “Butcher of Kouba.” His real estate business went beyond “red meat” and extended to the most affluent neighborhoods of the peaceful suburbs of Algiers. His name became known to the public in the summer of 2018 when his connection to the country’s political and financial scandal of “Cocaine Gate” shocked the public and served as an overdose that sank the Bouteflika clan in the spring.

According to Alg 24, an online paper, the excavation operations of his real estate developments had caused enormous damage in adjoining houses. Large cracks disfigure the walls of a house dating back to the French colonial era. Mr. Kamel Chikhi was duly arrested and he is now lodging in Algiers’ east side prison of al-Harrach, commonly known a-Raba’a q’tarat, with the country’s richest business families that flourished under the Bouteflika.

Currently the fight on anti-mafia finance led by the Military is equivocally based on the relative operation in December, 1981 against ex-President Bouteflika who was prosecuted for “secret foreign exchange management at the level of the Ministry of Foreign Affairs” between 1965 and 1978 by the Court of Auditors (la Cour des comptes).  This subsequent action led to the creation of  Algeria’s first Auditors Court, yet the laws are strict concerning the seizure and confiscation of illicit goods, and since 1962 all successive governments have neglected to cut off the economic power of Algeria’s finance gangsters, whether the oligarchs under the Bouteflika or the Military cliques.

Despite the harsh financial crisis striking the country’s economy, the richest people fair very well in Algeria. According to Algérie Part, the paper reveals for the first time the  TOP 20 of the country’s richest people. It remains very difficult to measure the wealth of an individual in Algeria, the money is taboo. For sedentary, political and sociocultural considerations, the richest people are forced to hide their identity; in addition, it is very complicated to investigate exhaustively all the bank accounts, real estate, paintings, yachts and private jets comprising their fortune.

These rich families dissimulate their fortune, corrupt judges, police and gendarmes, and act from abroad using opaque international structures. In this context the journalists’ method of investigation began as research to establish the ranking of the 20 richest billionaires in the country, and the results echo like a “big bang” in Algerian politics and money. The paper’s format resembles that of Mediapart in France and promises its readers to reveal more about to the holdings and outcomes of the largest fortunes in the country.

So, when it comes to the relation of politics and finance, the people of Algeria are missing, taking from Tony Soprano’s line, “Don’t stop believing, it goes on and on and on.”