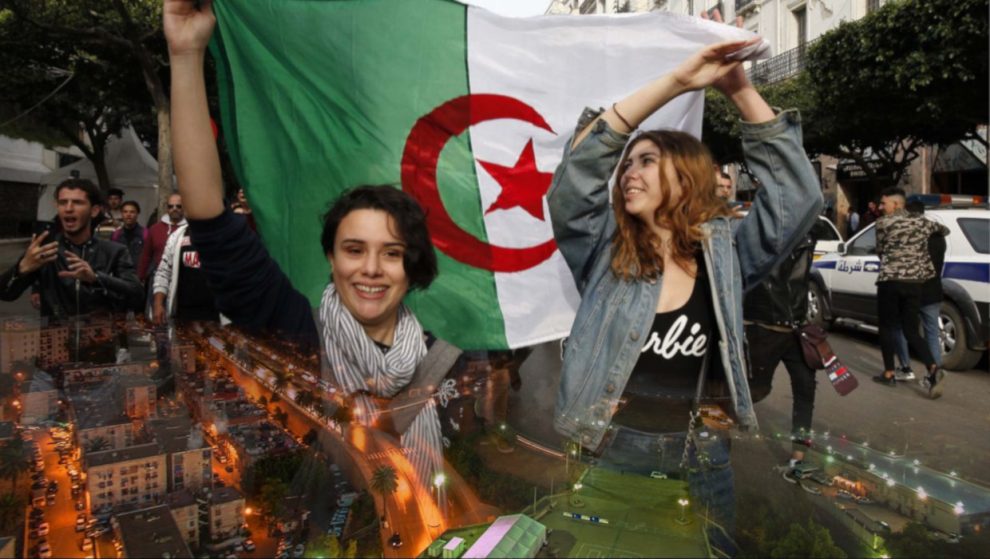 When the President returned though, the people began to sense the smell of hate, intolerance and simply death.

Sunday night Algerians went to bed with two pieces of sorrowful national news. First, they waited for long hours to hear that President Bouteflika is running officially for a fifth-term, watching while his newly-named campaign manager Mr. Za’alan arrived to submit the documents to the Algerian Constitutional Counsel President Sunday night. It’s routine news for the regime, and business as usual — during which thousands of people in cities throughout the country are protesting President Bouteflika’s fifth-term candidacy.

A term that a large majority sees as the “too much” term. The second news is the press conference of the President’s campaign manager reading the President’s letter announcing that important reforms are coming if the President is “re-elected.” And he has offered to step down after a year if re-elected.

Tens of thousands of protesting students had been rallying throughout the day in the country’s cities, and trying to gather near the Constitutional Counsel building in Ben-Aknoun, calling on the President not to submit election papers for the April 18th polls, the deadline which was Sunday mid-night.

In his letter, the President wrote: “I listened and heard the passionate call from the protests, especially the thousands of young people,” making a pledge to hold a referendum on constitutional reform, and not run for it. His statement was reminiscent  of Ben Ali’s speech in January, 2011, telling his people: “I did understand you…” (F’hamtkoum); there was however, immediate response from protests all night long in Algiers and other cities in the country, from those who had reacted in anger earlier to the letter read by Mr. Za’alan.

Thus the one trillion question of this political “Reality Show”, who wants to be a President, the people are saying yes, it’s the final answer — whereas the regime is saying wait… wait don’t tell me, and the analysts are saying, we are lost! On the eve of the President’s re-election for the fifth-term next month, Algeria still waits as it has for decades for change and rupture, not for change and continuity, which is what the country has been getting since the economic and democratic reforms of the mid-80s.

Algerians had a great deal of confidence and pride in their President’s first and second terms, a respected personality, once his Excellency manifested this line of smooth change as the providential man for the country. When the country was heading into political failure and social disintegration during the dark years of terrorism and contra-terrorism, the Algerians got stuck between monsters and thirsty vampires that sucked the people and the country’s blood and treasure.

When the President entered al-Mouradia Palace two decades ago, he appeared energetic, genuine and eloquent with his political maturity, ruse and intellectual duality.  Algerians were proud finally to see their country leading again on the world stage like it used to in the ‘70s, for being Mecca of the revolutions and Tiers-Mondism hub. Older generations remembered President Bouteflika dancing like an elegant goldfinch from airport to airport salons, podium to podium international media, advocating for people’s rights for self-determination, and defending just causes like those of the Palestinians, Namibians, and Western Sahara.

They remembered his unforgettable farewell speech in front of hundreds of the world leaders at al-A’alia cemetery in Algiers during President Boumédiènne’s funeral in December 1978, a speech that shaped his legacy as the top diplomat of the country ever. Later, he left Algeria for a decade, but the people felt that his heart never quit the country and its familiar fragrance of jasmine and fresh honeysuckle, like millions who are living abroad today.

When the President returned though, the people began to sense the smell of hate, intolerance and simply death.

In 1999, then Presidential-candidate Abdelaziz Bouteflika told the French media “If I do not have a frank and massive support of the Algerian people, I consider that the people must be happy in such mediocrity.”

Nonetheless, people were very pleased about his election, despite the lack of legitimacy, they applauded his re-election in 2004. Throughout this time regardless, many Algerian voters have been questioning the legality of his third, fourth, and now fifth-term. The Constitution was amended with a majority in the Parliament twice for the purpose of re-elections.

In this stance, people feel their beloved President is acting like those bankrupt regimes and weaving a web of family members and loyal friends around him; Algerians today are reproaching him claiming that he revived an old political tradition and are saying enough, it is enough (Barakat) — of regionalism and cronyism? People wonder when they recall the President was appointed Minister of Foreign Affairs when he was 27-years-old.

Today 27-year-olds in Algeria are either holding up the long walls of their neighborhood, or are struggling to obtain Schengen visas, not to go for a diplomatic, but for a nomadic mission. They prefer al-harga (illegal immigration in Europe) to al-hogra (injustice). The country is mired in a profound multi-dimensional crisis: the government is totally absent; corruption is the current money; and public policies never leave the meeting rooms.

Algeria, with such human and economic potential, still imports its daily basic food, and its manpower from China and Turkey. Add to that illegal migrants from the neighboring southern countries, and Syrian refugees who are doing heavy lifting and dirty work that Algerians don’t want to do, why should they?

Hence the people ask about the President’s achievements, for instance, for the sake of the love of the country, for the money that he spent for the Pharaonic enterprise of building a Mosque third largest in the Muslim world. Algerians would have been proud of their President’s legacy if it had shifted the nation’s interests from the century’s great architectural achievement to ordering instead to clean up the banks of Oued-al-Harrach (they started, but its not enough); and revising the urbanization policy of le Grand Alger, because the public health of the people and the landscape of the city are as worthy as building the third or fourth largest mosque in the Muslim world. Are saying the people.

A really shameful episode in the President’s legacy occurred last summer when people died from a cholera outbreak, due largely to the lack of well-equipped hospitals offering excellent care for those impacted. Not to mention the “Cocaine Gate.” People, notably young soccer fans, are making hilarious lyrics and prose based on the laxity of the administration’s Cabinet members.

If people are protesting and chanting “No!” to the fifth-term, then read it as a form of despair and a sentiment of frustration. People wish the President to get well and return home safe (according to Swiss news reports, the President is still in Geneva Hospital), not to lead, but to rest; they want a successor for the Algeria of the twenty-first century. People value his political skill, they know how he excelled in unlocking the regime’s black box code, imploding a political opposition that favored political positions to real opposition, and wrapping up the elite’s ideals and the people’s will, who still confound political fatalism and societal determinism, politicking and polity.

Tomorrow will be another day, a day of arguments, curses and mourning. A day of Monday morning quarterbacking. The regime is still intact as it was twenty-years ago, and even stronger. The Generals are showing a sense of respect and loyalty. Unlike January ‘92, they opt for a divine solution. The discussion at the Generals’ Castle is about how to bring the Zeralda clan to the house of obedience, not to hypnotize the people further, but to calm their anger and frustration.

Ironically, the President’s campaign manager name is Za’alan (angry in Arabic). The President’s entourage could have come up with a name like Rabee’a (Spring). So far Algerians hate the loose metaphor of political change, they are saying yes, it’s the final answer, but we are not happy about mediocrity that it offers.

Turkey-US standoff over the S-400
Qatar’s Foreign Ministry spokesperson: Turkey has been a strategic partner for 45 years
Comment