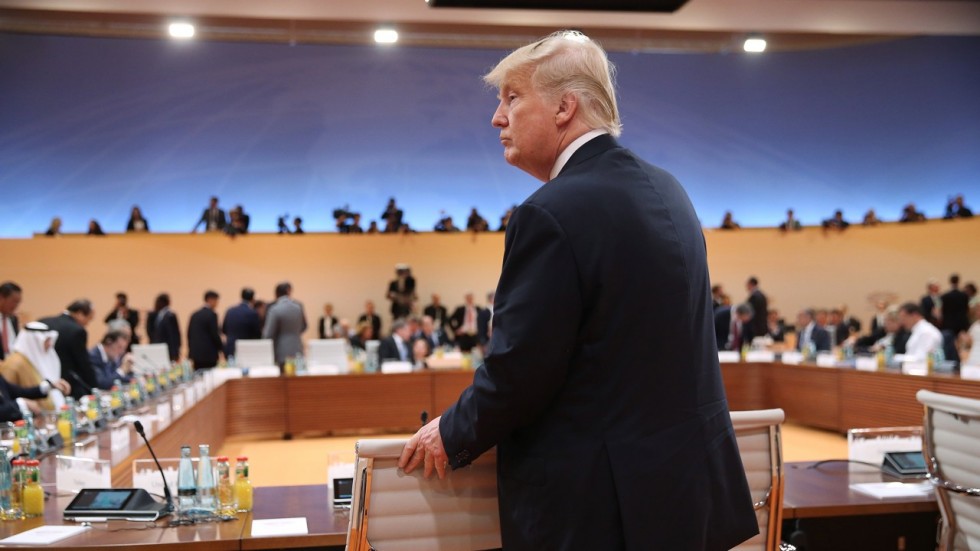 ANALYSIS – America Alone: Here is Why

The writer is the Dean of Faculty of Economics, Administrative and Social Sciences at MEF University in Istanbul.

The cover page of Time magazine said too much with only two words: “America Alone.”

Experts will sure comment on what, in their view, is meant to tell the public by this brief expression. There will be a plethora of explanations approaching the subject from various perspectives, extending from financial difficulties that the United States has undergone over the last decade, to a series of politico-military issues faced on various fronts from the Middle East to the Far East.

The explanation of the cover story is, indeed, simple: The triad that served the U.S. governments to date in coordinating their foreign and security policies has collapsed with the election of Donald Trump as president!

The triad, which is composed of the State Department, the intelligence community, and the Department of Defense (i.e., the Pentagon), may seem to exist physically, when looked from outside, but it barely operates in reality.

Donald Trump, when elected as the 45th president of the United States on Nov. 8, 2016, made an unusual statement asking all of the top diplomats who were appointed by the Obama administration to resign by his inauguration ceremony to be held on Jan. 20, 2017.

The “presidential order” was taken seriously not only by the ambassadors representing the United States in more than 50 countries worldwide, but also by the entirety of the seasoned diplomats that constituted the top tier of the State Department. All of them have left their posts abroad as well as at home and went on to retirement.

Moreover, the reaction of a large group of mid-ranking career diplomats at the State Department who followed their mentors and quit their jobs came as salt to injury.

The departure of hundreds of highly knowledgeable and experienced foreign service officers has dealt a huge blow to the capacity of the United States government to even pursue its daily routine in terms of staying abreast with the political, diplomatic and also military developments around the world, especially amid such a volatile and chaotic international environment.

In the absence of the diplomatic leg of the triad, the presidential office in general, and Donald Trump himself in particular, has long been cut off from the steady flow of policy options, which used to be cooked in the State Department offices in Washington D.C. relying on the raw material collected from the diplomatic representations abroad, and then fine-tuned and served by the top diplomats close to the White House.

So long as the ambassadors who resigned are not replaced with their fellow diplomats, this acute problem is likely to remain. Bearing in mind as to how long the process of appointing an ambassador takes — as the nomination by the president has to be approved by the Senate, which may take days and weeks, if not months — it would be an optimistic view to expect that the void in the U.S. diplomatic service might be restored and filled in any time soon.

Hence, according to more than three dozen current and former diplomats interviewed by the Foreign Policy magazine, “by failing to fill numerous senior positions across the State Department, promulgating often incoherent policies, and systematically shutting out career foreign service officers from decision-making, the Trump administration is undercutting U.S. diplomacy and jeopardizing America’s leadership role in the world.”

A similar decay is also being experienced in the U.S. intelligence community, which attracted the upfront antagonism, if not enmity, of Donald Trump from day one, who angered them by publicly disputing their early conclusions that Russia was behind hacking and other activities meant to torpedo his presidential rival, namely Hillary Clinton.

Contrary to former U.S. presidents, Donald Trump is sharply criticized by then CIA director John Brennan on Jan. 15, 2017, “for equating spy agencies to Nazi Germany” and he “suggested that [President Trump] needed to focus more seriously on the security issues facing the nation.”

Thus, ever since he took office, Donald Trump is not being fed daily intelligence briefings, which, however, used to be one of the most important aspects in the official responsibilities of most of the previous U.S. presidents.

To cite an example, George H. W. Bush once said that his CIA director was the second person after his wife that he saw every morning and that the daily intelligence briefing was more important than breakfast!

The de facto absence of the second leg as well in the triad mentioned here, being the U.S. intelligence community, had serious consequences for the United States as a global power in the making of its foreign and security policies toward the rest of the world consisting of both friends as well as foes.

Because, intelligence reports would normally constitute, among other reports, the key ingredients of the policies devised by its masters both at the State Department and in the Pentagon, of which the eventual harmonization by the senior staff at the White House and the National Security Council would bring before the president a spectrum of policy options.

Therefore, it would not be an exaggeration to argue that, in the eyes of Donald Trump, the Pentagon remains the one and only respected institution in the whole triad, which in turn, apparently dominates the entire decision-making mechanism at the White House.

This is a rather unusual situation for especially the close allies and friends of the United States, many of which uphold the principle of “democratic control of the armed forces” that has gained much substance in these developed and developing countries over the past decades.

The United States, however, is experiencing the opposite and the armed forces, namely the Pentagon, seem to control the government policies through their influence on the decision-making mechanism headed by “Commander in Chief” Trump.

The repercussions of these unusual developments in the U.S. administration can be seen in the words of former President George W. Bush, who sees “the return of isolationist sentiments — forgetting that American security is directly threatened by the chaos and despair of distant places, where threats such as terrorism, infectious disease, criminal gangs and drug trafficking tend to emerge.”

To date, President Donald Trump has shown no sign of reversing his attitude toward the members of the diplomatic service and the intelligence community in the country, hinting at the possibility that the divide between the United States and the rest of the world can only get wider.

It goes without saying that the void in international politics is always filled in with contenders, such as great powers Russia, China, the European Union as well as mid-size powers, in various parts of the world, such as India, Brazil and Turkey.