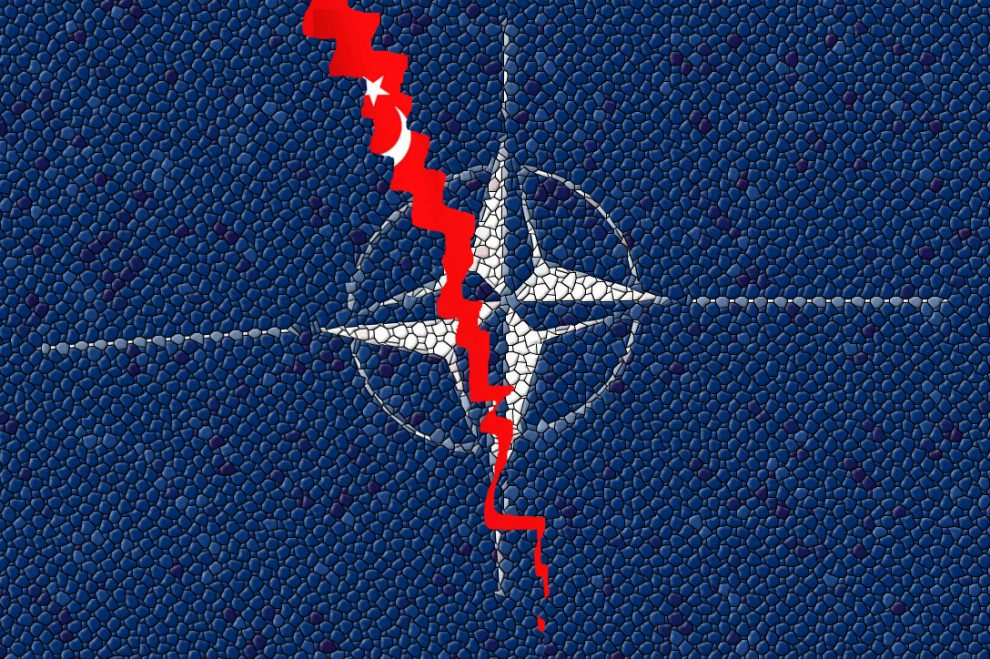 Earlier last week, before Donald Trump ordered airstrikes on Syrian chemical weapons facilities, a senior Pentagon official looked down at his coffee and shook his head. “Do you remember that thing our parents used to get us?” he asked. “You know, it was a cylinder and you turned it and all of the colors at the end changed.” He thought for a moment. “Oh yeah, a kaleidoscope” he said. “That’s what it was called.” He smiled and continued: “Well, that’s Syria.”

His analogy seems apt, except that one crucial issue has been lost in the kaleidoscope’s colors—the under-the-radar struggle between Eucom, the U.S. military’s European Command, and the U.S. Central Command, which is responsible for the Middle East. At issue between the two is the looming cost and potential consequence of Centcom’s marriage of convenience with the YPG militia (the Kurdish People’s Defense Units) that the U.S. has used to fight ISIS in Syria. The difficulty for the U.S. is that while the YPG’s battle-hardened cadres have notched a series of crucial victories over ISIS, including the most recent one at Manbij, a Syrian town on the Euphrates River, the militia is an arm of the Kurdistan Worker’s Party (the PKK), which has been designated as a terrorist group by the U.S., EU, and Turkey. PKK attacks have killed thousands of Turks since the movement was founded in 1978.

So it is that while Turkey has always looked askance at the U.S.-YPG partnership in northern Syria, it was willing to tolerate it on the basis of American assurances that the marriage was one of convenience: it was essential, but short-term—it was “temporary, tactical and transactional.” That, it seems, is no longer the case. For Turkey, several senior Pentagon officials and military officers say, the U.S.-supported YPG victory at Manbij (made possible by air cover provided by the U.S. Central Command) was the last straw for the Ankara government. Why? “It put Kurdish fighters within spitting distance,” as a former senior military officer described it to me, of Turkish army units in the Syrian city of Afrin, some 70 miles away.

“The U.S.-YPG alliance has poisoned U.S.-Turkish relations,” a senior Turkish official told TAC last week, “and you can’t just pass it off. All right, so you needed the YPG to defeat ISIS, fine. Mission accomplished. So now, get the YPG out of Manbij. Good God, you’re digging trenches for these people.”

How badly “poisoned” is the U.S.-Turkey relationship? In fact, Centcom’s dependence on the YPG to carry the fight to ISIS (which includes 2,000 U.S. soldiers deployed in Syria) has so roiled Turkey that a host of influential military officers and their civilian counterparts in NATO have recently warned Secretary of Defense James Mattis that America’s support for the YPG is endangering their alliance’s unity. That’s especially bad because NATO is facing off against a resurgent Russia—a far more formidable adversary, they argue, now that ISIS is nearly tamed. Among the critics is General Curtis Scaparrotti, the head of the European Command and the Supreme Allied Commander in Europe. While the bespectacled Scaparrotti looks more like an Oxford professor than a combat commander, he’s one of the most respected officers in his service. “I saw him in Iraq,” one of his colleagues notes, “and he was as cool as ice, as tough as they come. Combat never bothered him. He just didn’t give a shit.”

During a trip to Washington in March, Scaparrotti huddled with Mattis to express his worries over the growing tensions in U.S.-Turkish relations, worries that the European commander has also expressed in several meetings with General Joseph Votel, his counterpart as head of Centcom. NATO partisans speculate that Scaparrotti told Mattis what he’d emphasized to Votel: that Turkey had inked a 2016 agreement with the EU that, in exchange for closer ties to their Western European counterparts (and just over $8 billion), it would harbor some 3 million Syrian refugees who have fled Syria. If Turkey feels it is being ignored, Scaparrotti undoubtedly suggested, those refugees could end up on the streets of Hamburg.

Just as crucially (as Scaparrotti also likely reminded Mattis), Turkey has been sidling up to Russia, agreeing to purchase two S-400 surface-to-air missile batteries from Russia for $2.5 billion. The purchase went forward despite U.S. protests that the batteries were not interoperable with NATO systems, a signal from the Turkish government that the U.S. is not the only arms game in town. “No one benefits more from the U.S.-Turkey rift than Russia,” a NATO partisan and Scaparrotti colleague says. “I think Scap has made it clear: the U.S.-Turkey disagreement could well be the greatest political threat to the alliance since France withdrew from the military chain-of-command, back in the ‘60s.” That Russia has been courting Turkey successfully is one of the most significant, if unintended, results of the U.S.-YPG relationship, former Syrian diplomat Bassam Baradandi adds. “Turkey wants its southern border secure from terrorist organizations,” Barabandi says, “and Russia has played well on this sensitive issue. Historically, Turkey has never been a friend to either Russia or Iran, but Turkey’s mistrust of U.S. actions and their alliance with the YPG have pushed them in that direction, there’s no doubt.”

Perhaps as crucially, Turkish president Recep Tayyip Erdogan has signaled his displeasure with the U.S.-YPG marriage by making it clear that some American officials are simply not welcome in Ankara, including Brett McGurk, America’s special presidential envoy for the Global Coalition to Defeat ISIS. “Erdogan hates McGurk,” a Turkish government official noted to TAC, “and he doesn’t like Votel either. It’s getting ugly.”

In fact, just how “ugly” the relationship has become is fast becoming a matter of public debate. During his March visit, Scaparrotti appeared before the Senate Armed Services Committee to give testimony on the challenges facing his command. While most members focused on Russia and cyberwar issues, Virginia Senator Tim Kaine explored the U.S.-Turkey dust-up, hinting that it might be time for the U.S. to dampen its YPG ties. Scaparrotti didn’t disagree, while soft-pedaling the disagreements over the issue that he’s had with Votel and Centcom. “Where do we want to be in a year, two years and five years?” he asked. “With a close NATO ally like Turkey, we know that we want to maintain and strengthen our relationship. So that’s the long-term objective and if we look at the long-term objective, it can begin to inform what we’re doing today with respect to NATO.” The senior military officer with whom I spoke proved a willing translator: “What Scaparrotti is saying is that the real marriage here is between the U.S. and Turkey. The YPG is just a fling.”

But convincing James Mattis of that is proving difficult, in part because Scaparrotti is outgunned. Every defense secretary surrounds himself with people he can count on and who he listens to. But for Mattis almost all of them have had experience in the Middle East—and at Centcom. There’s Mattis himself (a former Centcom commander), JCS Chairman Joseph Dunford (who served with Mattis in Iraq), Joint Staff Director Lieutenant General Kenneth McKenzie, Jr. (a Marine who served in both Afghanistan and Iraq), retired Rear Admiral Kevin M. Sweeney (the former Centcom executive officer), Rear Admiral Craig S. Faller (a Mattis advisor, and a Navy commander during both the Afghan and Iraq wars), and current Centcom commander General Joseph Votel—the former commander of the U.S. Special Operation Command (“a trigger puller,” as he was described to me by a currently serving officer). Votel is the most outspoken YPG supporter of any of them, and because he’s the combatant commander, his support carries weight.

“This is clientism,” the senior military officer with whom I spoke explains. “All of these guys have served together and trust each other. And, you know, this is the way it works. The U.S. Central Command has the Middle East as a client and the European Command has the Europeans and Turkey as clients. But if you take a look at Mattis and the people around him, well, you know, it’s all Centcom. So Scaparrotti is worried, and he ought to be. We don’t want to be sitting around 30 years from now reading historical pieces with titles like ‘Who Lost Turkey?’”

Even someone as careful in his public utterances as Admiral James Stavridis, who once held Scaparrotti’s command and is now the dean of the Fletcher School at Tufts University, is raising concerns. While he waves off the “who lost Turkey” formulation as “a trope that is moving around the Internet,” he told me in an email exchange that “it would be a mistake of epic proportions to allow Turkey to drift out of the transatlantic orbit”—a repeat of the warning issued by Scaparrotti to Mattis in March. But like Scaparrotti, Staviridis is slow-rolling his disagreement. “This is a distinction without a difference,” the senior officer and NATO partisan with whom we spoke says. “By drifting out of NATO, Stavridis means leaving. He’s as worried as anyone else.”

Concerns over Turkey are probably a surprise in the White House, given its almost daily crisis over the looming Russia-gate investigation, but they shouldn’t be. The president has had extended telephone exchanges with Turkish President Tayyip Erodogan twice in the last three weeks. While the White House has refused to give details of these conversations, the Turkish official with whom we spoke told TACthat in both conversations (on March 23 and again on April 11), Erdogan emphasized three growing concerns he has that America’s temporary and “transactional” support for the YPG is becoming permanent. This same official went on to note that, in his opinion, it’s not a coincidence that Trump floated the idea of withdrawing U.S. troops from Syria (“I want to get out,” he said. “I want to bring our troops home”)—a suggestion that did not go over well with Centcom partisans at the Pentagon. On April 3, the same day Trump issued his let’s-get-out statement, Joseph Votel and Brett McGurk appeared at the U.S. Institute of Peace, arguing that the U.S. needed to stay in. “The hard part, I think, is in front of us,” Votel said, “and that is stabilizing these areas, consolidating our gains, getting back to their homes. There is a military role in this,” he went on to say. “Certainly in the stabilization phase.”

The Votel appearance was exasperating for those worried about NATO’s future, and for those concerned that the endless conflicts in the region are draining the defense budget of badly needed funds to rebuild U.S. military readiness. For them, a group that now includes a growing number of very senior and influential military officers, “stabilization” is not only a codeword for “nation building,” it signals support for a mission that is endangering the future of NATO, the institution that has guaranteed peace in Europe for three generations.

“It’s not worth it,” the senior military commander who spoke with TAC concludes. “On top of everything else, it puts us on the wrong side of the political equation. This whole thing about how the enemy of my enemy is my friend is a bunch of bullshit. The enemy of my enemy is now making an enemy of our friend. I don’t know who we think we’re fooling, but it sure as hell isn’t Turkey. And it isn’t the American people either.”

Syria is being struck, but the aim is to siege Turkey
Assad; an animal but not crazy
Comment