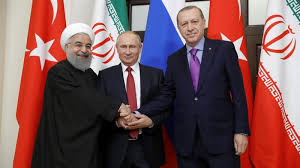 The U.S., U.K. and France attacked Syria with tomahawks.

And on the night of Miraj too.

“Chemical weapons” is an excuse, it is the Astana process that has been attacked. They are going to run the Geneva process. They openly said this anyway.

It appears that the Syria regime and Russia are being punished, but in reality, Turkey is being sieged.

The U.S. and Russia could be in a “sham fight.”

The aim is to siege and corner Turkey.

Turkey’s strategy in relation to the attack on Syria is right: Seeing the fact that Turkey is being sieged and foiling, thwarting this game.

Continuing with the active balance strategy

I had said that Turkey needs to follow an “active balance strategy” almost three years ago, before the Euphrates Shield operation.

What I am referring to when I say active balance strategy is, Turkey developing active strategies in proportion with its power, taking steps that will break the wave, spoil the game and in time, reach a position to set up game.

Turkey, since then, seems to have adopted this active balance strategy as its fundamental strategy.

The strategy followed by Turkey in terms of the U.S., U.K. and France’s attack on Syria is the inevitable result of this balance strategy.

After the Euphrates Shield and Olive Branch operations, Turkey started to gain strategic superiority in the region and dealt a blow to the preemptive attempts of the West, Russia and Iran through terrorist organizations such as Daesh and the People’s Protection Units (YPG).

Russia, the West and Iran had actually cornered Turkey using terrorist organizations like Daesh and the YPG.

This game was spoiled – as a matter of fact, thwarted – with the military operations Turkey organized one after the other because of the active balance strategy we have been following.

The target is Turkey!

Turkey taking the lead, conducting military operations, revealing their games and thwarting them infuriated the West.

Turkey starting the Astana process with Russia and Iran helped the West see that “Turkey is both a game changer and game setter.” And this made the West anxious.

There is a complex process here. It is an extremely confusing process that is hard to understand.

We are acting together with Russia and Iran. But to a certain point.

But eventually to pave the way for Iran.

To destroy the Muslim world order established through the Ahlus-sunnah backbone a thousand years ago.

The stronger Iran gets – and it is gaining incredible power, gaining dominance over the Arabian peninsula – the easier the Ahlus-sunnah backbone will crack, and the Muslim world will never again pick itself up so easily.

To achieve this, both the U.S. and Russia are trying to leave Turkey out and pave the way for Iran and Salman’s Saudi Arabia as “rival brothers” / “tools.”

Therefore, the real target in the region is Turkey; the aim is to first deactivate Turkey, then siege it, corner it and make it kneel.

The film “Kardeşim için Dera” (Dera for my Brother)

The film, “Kardeşim İçin Dera” (Dera for my Brother), the impressive and legendary story of the uprising against Bashar Assad’s oppression is now showing in cinemas.

The gala of the TRT joint production film, directed by Murat Onbul and produced by Halis Cahit Kurutlu, was held in Syria’s Çobanköy region.

When you watch it, you too are going to react against Assad’s tyranny.

Tipping and Bargaining in Egypt: Bakhshesh or Sadaqa
America’s Fling With the Kurds Could Cause Turkey and NATO to Split
Comment