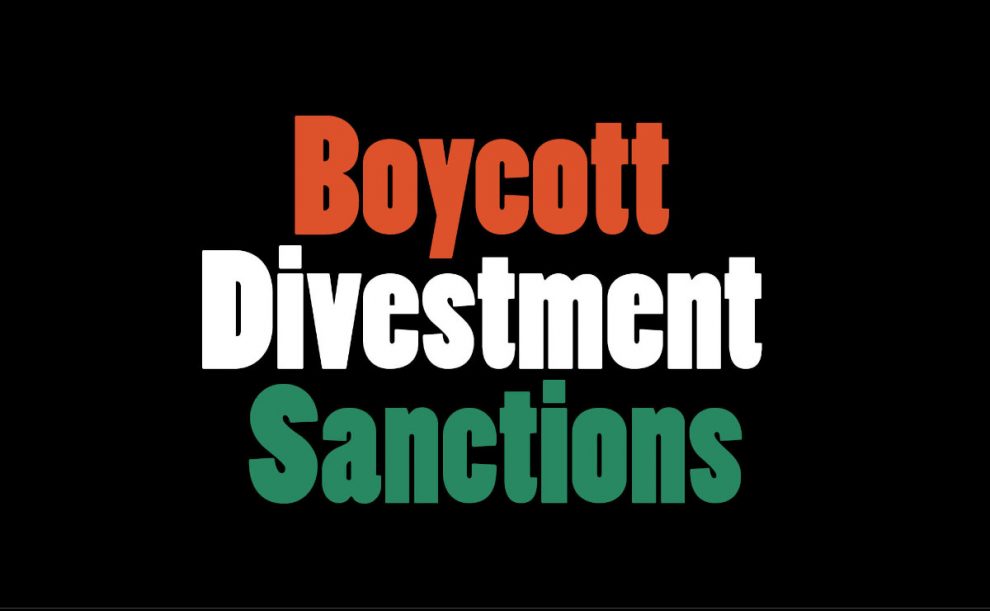 Uwe Becker, mayor of Frankfurt and antisemitism commissioner of Germany’s federal state Hessen, said on 7 August 2019 in an official press release through the official Hessen government website about the movement Boycott, Divestment, Sanctions (BDS) in Germany: “The self-declared human rights movement has become a machinery of intimidation, a new form of terror against Israel, financially dubious and funded by the Iranian regime as well as the questionable structures of the terrorist organization Hezbollah. More and more, people are seeing the true image and character of the anti-Semitic BDS movement and its support from terrorist organizations operating worldwide, and are engaging themselves against this Israeli form of anti-Semitism.”

Becker compares the non-violent BDS movement with a violent terrorist organization and he equalizes human rights advocates with terrorists. In Hessen and beyond in Germany characteristics of totalitarian governance are appearing. Today activists and supporters of BDS are targeted and blacklisted, tomorrow it could happen to anyone else.

In February 2019, the Ministry of Strategic Affairs of the State of Israel published a report about alleged links between BDS and terrorists: ‘Terrorists in Suits: The Ties between NGOs Promoting BDS and Terrorist Organizations’.

Antisemitism commissioner Becker was probably briefed by someone familiar with the propaganda of the Ministry of Strategic Affairs before he released his governmental communique.

When Netanyahu addressed the American Israel Public Affairs Committee (AIPAC) in the USA in 2014, he used the word BDS 20 times. Only the word Iran was used more frequently in his speech. The audience at the AIPAC congress center were given the impression that Iran were behind BDS.

On 31 July 2019, Germany’s major daily ‘Frankfurter Allgemeine Zeitung’ published the report ‘The trail leads to Tehran. The founding legend of the Israel boycott movement BDS’. The newspaper traced the supposed beginnings of the BDS back to the UN Conference against Racism, which took place in 2001 in Durban, South Africa. The preparatory regional conference for the Asian continent was held in the Iranian capital Tehran. ‘Frankfurter Allgemeine Zeitung’ concludes as well that Iran were behind BDS. The editors of the newspaper had clearly paid attention to the messaging of Netanyahu’s 2014 AIPAC speech.

On 17 February 2010, Prime Minister Benjamin Netanyahu addressed the Conference of Presidents of Major American Jewish Organizations. He said: “Palestinians have done three things: they’ve loaded obstacles and preconditions that prevent them from entering the tent, demanding of us what they have not demanded from any government since 1994; they’ve initiated the attacks on us in what we call ‘lawfare’ and what you call Goldstone, which is meant to deprive us of our legitimate right to self-defense against terrorists who fire on civilians while hiding behind civilians; and they have not tamed the incitement in their official, government-controlled media.”

According to my research this was the first public speech in which Netanyahu used the term ‘lawfare’ (a portmanteau of the words law and warfare) and he is clearly using it as part of his propaganda campaign to delegitimize human rights advocates. Lawfare propagates the concept of a form of war consisting of the use of the legal system against an enemy, such as by damaging or delegitimizing them, tying up their time or winning a public relations victory.

Two months later on 5 April 2010, the Legal Task Force of the Scholars for Peace in the Middle East released its first major statement, blasting the alleged misuse of universal jurisdiction. It commented on the supposed “harassment of Israeli officials … that selective enforcement, under-enforcement and over-enforcement all exacerbate the risks of legal uncertainty, unpredictability, confusion, disparity and inequity.”

The group continued: “abusive practices can jeopardize peaceful relations among nations, by curbing international travel by senior governmental officers and provoking retaliatory actions by states whose officials are subjected to extraterritorial jurisdiction.” The Scholars for Peace in the Middle East concluded that: ‘As part of our mission we have been concerned for some time by the abuse of universal jurisdiction used as an extension of what has become ‘lawfare’ against Israel and other democratic nations. The new lawfare stands in the way of Middle East peace.”

On 6 June 2019, ‘Jüdische Allgemeine’, a weekly of the Central Council of Jews in Germany, published a report ‘The legal jihad’ about citizens who stand up for their rights.

The propaganda campaigns which began nine years ago about ‘lawfare’, ‘terrorists in suits’ and ‘legal jihad’ aim to delegitimize international and humanitarian law. The purpose of the slander reports of the Ministry of Strategic Affairs of the State of Israel is to nullify the law. The victims of the violations of human rights are painted as perpetrators if they seek justice by making use of these legal remdies.

In 2002, the USA’s Guantanamo Bay Naval Base which lies at outside territory on the island of Cuba, became a black site for torture of ‘unlawful enemy combatants’ who were abducted and transferred from all over the world to Cuba without a court order, without legal status and without the protections of the Geneva Conventions.

The combatants tortured at Guantanamo Bay Naval Base are defendants in a military commissions system and completely removed from jurisdiction. They do not get access to their own lawyers because this is considered by the USA to be ‘lawfare’ to quote Netanyahu or ‘legal jihad’ to quote the ‘Jüdische Allgemeine’. Today jurisdiction has become the privilege of the ruler.