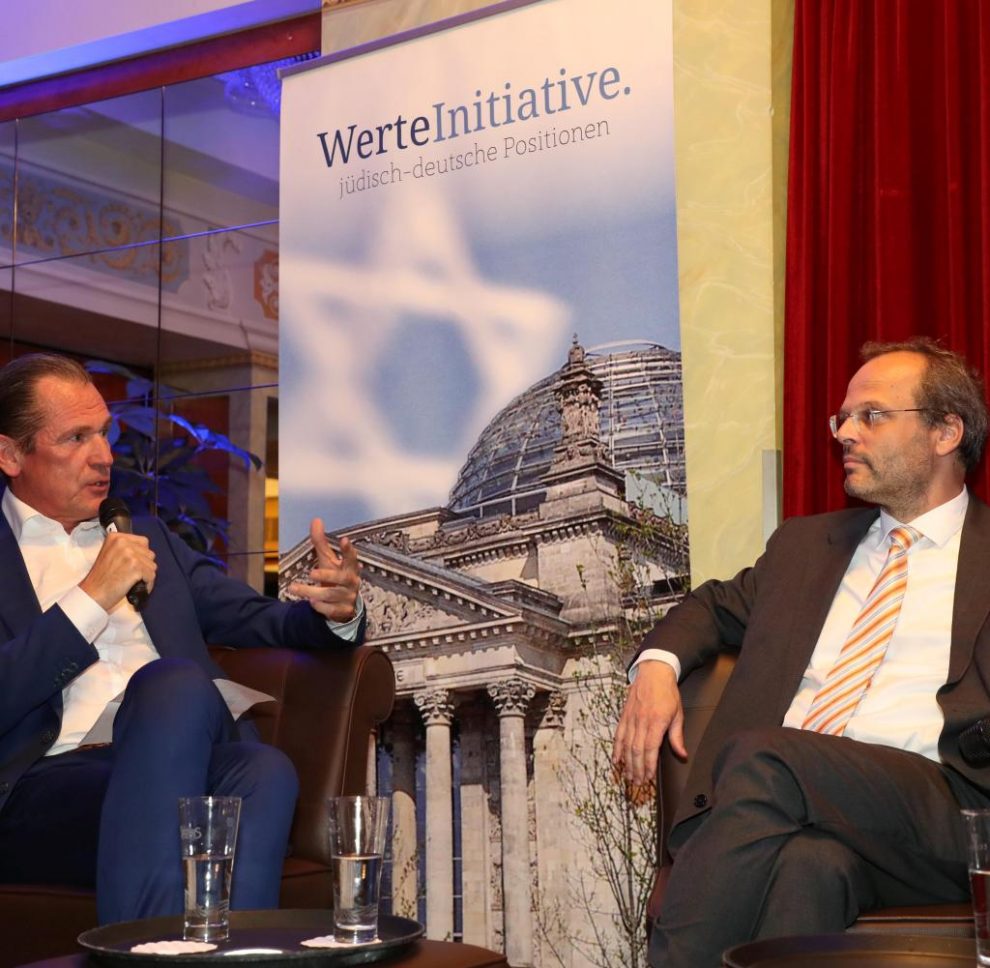 Two organizations lead by Netanyahu-supporters in Berlin successfully lobbied for the anti-BDS resolution of the Bundestag.

On 17 May, the German Federal Parliament Bundestag became the first in the European Union to pass a resolution that designates the Boycott, Divestment and Sanctions movement (BDS) against the military occupation of Palestinian territories by the Israeli Defense Forces (IDF) as „anti-Semitic“.

BDS is a Palestinian-led movement for freedom, justice and equality which upholds the simple principle that Palestinians are entitled to the same human rights as the rest of humanity.

Adler is the „Ambassador for Democracy and Tolerance“ by an initiative of both the Federal Ministry of Justice of Germany and the Federal Ministry of Interior of Germany. Adler is also the Chairman of the “ValuesInitiative” and the Vice Chairman of „The Middle East Peace Forum“, both pro-Netanyahu organizations based in Berlin. “ValuesInitiative” and Naffo aim at counteracting BDS in Germany. Both organizations have the same seat: Schiffbauerdamm 40 which is the Federal Press Conference of Germany (BPK).

Its website says „BPK decides who will provide information on which topic. The government press conferences take place according to a fixed schedule. Every Monday, Wednesday, and Friday the government spokesperson and the spokespersons of the ministries are available to answer all questions relating to political events. All of the press conferences are open only to members of the BPK and Association of the Foreign Press. The conferences are held in the hall of the Federal Press Conference building. The hall and offices of the BPK are rented from the Allianz Group, which owns the building.“

How is it possible that two extreme-right and neocolonial lobby organization both have their seat at the Federal Press Conference of Germany in Berlin?

“ValuesInitiative” is according to its website „a political and non-profit association that has established itself as a voice of the Jewish society in Germany for several years. We are committed to strengthening the values of the liberal-democratic constitution from a Jewish perspective. We do this by promoting value-based political, social and media discourse, civic-Jewish engagement in Germany and supporting German-Israeli relations. The focus of our activities is in the areas of internal security, integration, prevention of extremism, fight against anti-semitism and xenophobia. As part of our work, we conduct background discussions with members of the Bundestag, other politicians and socially relevant actors, make public statements and recommendations, are active in social media on a daily basis, and hold panel discussions and political salons. We are also creating a network based on political education to strengthen democracy, for sustainable civic engagement of young and old, and for inter-religious exchange.“

Adler is also Vice Chairman of „The Middle East Peace Forum“ (Naffo) which is according to its website „is a group of dedicated German citizens who are all committed to peaceful political and social developments in the Middle East. Based on a foundation of shared democratic values Naffo engages in regular and forward-looking dialogue with policy-makers in Germany. Through its work, Naffo has access to excellent contacts and resources and offers its interlocutors a reliable source of exclusive information.“

On a Wednesday in May, just a few days before the anti-BDS resolution was adopted by the members of Bundestag, at 7.30 am in room 4.101 of the parliament building, lawmakers from several political groups met in order to prepare the adoption of the anti-BDS resolution. Adler has called for this “round table“ for lawmakers. The room was reserved by Bijan Djir-Sarai, a lawmaker of the Free Democratic Party (Germany) who is from Iran and well-known for his pro-Netanyahu policies. Djir-Sarai and Adler co-initiated the anti-BDS Bundestag resolution.

Christian Schmidt, the former German Minister of Agriculture, got upset about Adler. He criticizes that the „ValuesInitiative“ interferes in the parliamentary process, participants who witnessed the meeting said later. “That’s not an unnecessary procedure,” Schmidt said. Resolutions are usually written by the parliamentarians themselves and not by lobby organizations.

Adler gives the floor to the anti-Semitism commissioner of the Federal Government, Felix Klein, a former Senior Diplomat of the State Department and liaison officer for Zionist organizations. Klein explained why he considers the BDS movement to be dangerous, then talked about the anti-BDS draft resolution.

Former Minister Schmidt again said: “Dear Mr. Klein, if I am not mistaken, you are the Commissioner of the Federal Government. As part of the executive you are not responsible for parliamentary work.“ Several participants of the meeting later confirmed this dialogue.

The intervention works, at least for a short time. “We do not want to talk you into it,” Adler said. Federal Commissioner Klein says today that he “no longer commented” on the draft text. Because there was no need. The draft resolutions was shortly adopted by the lawmakers a few days later. In the end, the anti-BDS resolution was adopted as the “ValuesInitiative” wanted.

The BDS movement is now being ostracized on a federal level in Germany. The Israeli government has celebrated the anti-BDS Bundestag resolution like a trophy. Gilad Erdan, the Minister of Strategic Affairs, called the resolution “groundbreaking” and “the most significant move so far” at a conference in Jerusalem.

Erdan is at the center of the Israeli fight against the BDS movement, using dubious methods. He recently admitted that he had founded an organization to covertly support campaigns against the boycott initiative.

Converted about 30 million euros, the Ministry of Strategic Affairs has provided for even the intelligence service Mossad to be involved according to media reports. Especially in Europe and the US, pressure has been put on banks to close the accounts of groups that support BDS. So-called front organizations in the countries should have helped.

The suspicion is obvious that even the “ValuesInitiative” or Naffo could belong to those “front organizations“ allegedly supported by the Ministry of Strategic Affairs and Mossad.

Naffo at least was present at the conference in the Bundestag in order to co-ordinate the anti BDS resolution draft.

Naffo’s Executive Director Mirjam Rosenstein confirmed that a Naffo co-worker “participated as a listener“ at the Bundestag meeting but denied working with the ministry in Israel: “Naffo does not coordinate any of its activities, online or offline, with the Ministry of Strategic Affairs.” Also financial support did not exist.

In terms of contents, however, Naffo represents positions that are strikingly similar to those of Prime Minister Netanyahu.

Officially, the Naffo association says that it is committed to the founding of a Palestinian state. In internal papers, however, this position is already being questioned: “The Chair encouraged members to actively engage in the Naffo discussion on whether and to what extent the two-state solution should continue to be sought in the Israeli-Palestinian conflict,” the minutes of the 2017 Naffo General Assembly said.

In order to maintain close contact with the “contact MdBs [members of parliament]“, Naffo likes to organize trips. Usually twice a year, the association invites lawmakers and the staff of lawmakers to Israel. In the minutes of the 2018 Naffo General Assembly, a trip for members of parliament’s staff stated that it was “particularly important because of the great influence of the employees on their superiors“ the lawmakers.

How Naffo finances these regular trips is not clear. A membership in the association costs 1000 euros a year, but members’ meetings are also thanked to „our major donors“. Executive Director Rosenstein does not want to tell anyone who that was, just so much: “The donors of Naffo are exclusively private individuals.“

In 2017, Naffo even managed to get money from the Foreign Office for a trip. But it remained with the one-time subsidy. Many diplomats probably regard the aggressive lobbying methods as critical.

How well connected Naffo is inside Berlin’s political network, was also apparent during the coalition negotiations in early 2018. To the astonishment of some negotiators, the association knew early on a draft of the coalition agreement decision. And managed to change the wording, as Naffo himself notes in the Minutes of the Naffo General Assembly: “Shortly before signing (…), Naffo has alerted dozens of lawmakers to what we regard as a devastating passage to the Middle East through a targeted campaign and could achieve a significant improvement.“

In order to get even closer to the politicians, Naffo and the „ValuesInitiative“ transfer money and donations to selected Bundestag members. Already during the election campaign of 2013, he was approached by Naffo representatives, said lawmaker Frithjof Schmidt, then Deputy Chairman of the Greens faction of the Bundestag. “There was an offer from two Naffo representatives to donate money for my personal election campaign.“

The “personal donations” were intended for the foreign policy deputies they wanted to be reelected to the Bundestag. “It was 1500 euros,” says Schmidt, who rejected the offer. But in the end, a donation was actually landed in the account of the federal party.

Naffo’s Executive Director Rosenstein says: “Naffo has never offered donations to a politician.” At the same time, she says that Naffo representatives Schmidt “have stated that a few private individuals who at the time were members of Naffo liked to campaign with a campaign donation would support.

In June 2017 Elio Adler invites to a donation dinner in Berlin-Dahlem, a district close to the Embassy of the State of Israel to Berlin. He sent the invitation from his e-mail account of the „ValuesInitiative“. According to Adler, the organizers of the evening were neither he nor the club: “The place was a private house, the host, who also paid the dinner, is a private person,” he said. Adler did not reveal the name of the host.

It was Adler who used his contacts to make an illustrious round. He invited six members of parliament from the Bundestag, the Social Democrats Michaela Engelmeier and Fritz Felgentreu, as well as Thomas Feist and Thorsten Frei of the Christian Democrats. The most famous guest was Jens Spahn, today’s Minister of Health of Germany. The foreign policy expert of the Union, Roederich Kiesewetter, was also invited, but cancelled his participation.

Kiesewetter is the rapporteur of the Union for Israel and the Palestinian Territories. He says that Germany’s relationship with Israel is a special concern of his. “In my opinion, however, this will only be credible and sustainable if I can go about my work independently.” That’s why he did not want to receive any money. Strangely enough, although he had refused donations, Kiesewetter was still being paid money “to my campaign account of the CDU district organization Ostalb,” he says. Kiesewetter’s case involved several individual donations from individuals and companies. He had it sent back immediately.

The CDU deputy Frei confirmed in-coming donations in a total of four digits after the dinner “of nearly twenty people“. Three other lawmakers did not deny that money has been transferred to them 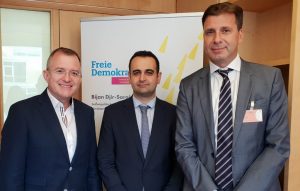