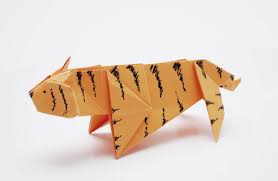 The phrase “Paper tiger” is the translation of the Chinese phrase “zhilaohu” and it refers to something that seems threatening but is ineffectual and unable. The most recent usage of it was in Mao Tse-tung’s little “Red Book”:

“Now the U.S. imperialism is quite powerful, but in reality it isn’t. It is very weak politically because it is divorced from the masses of the people and is disliked by everybody and by the American people too. In appearance it is very powerful but in reality it is nothing to be afraid of, it is a paper tiger. Outwardly a tiger, it is made of paper, unable to withstand the wind and the rain. I believe the United States is nothing but a paper tiger.”

Through many examples, Chairman Mao tries to prove his point that “the big decadent forces will give way to the small new-born forces,” and these small forces change into big forces because the majority of the people demand this change and – in his words – what he calls American imperialism would be eliminated like Germany’s Hitler, the Japanese militarists and peace would prevail.

We cannot say for sure if any big or small forces could make it happen anytime soon, but the opposite seems to be in the works: With its 83 million members, the Chinese Communist Party may be the largest political party in the world, but it is definitely trying to push the wheel of history backwards. When looked closely, you can see that the communist government shows the strains of fatigue managing such a big population with enormous central planning authority and without the help of now-classical devices of capitalism as credit cards. You look around hard and fast and you see the Mao hats only in the yards of museums. Buddhist monasteries are chock-full of young and old people practicing Buddhist mantras and chants. Du Fu’s house is full of admirers 12 centuries later, “Inspired and stirred by the breath of creation.”

The once-holy Communist Party will hold its 19th convention on Oct. 18, but the hotel receptionists have no idea about its venue. There are huge red banners on flyover junctions in major cities, but apparently nobody cares to read the messages once repeated to death on radio and television. Speaking of televisions: They still have perfunctory news bulletins about the party officials and the popular American variety shows, entertainment programs, series, quiz shows, puzzle games, talents shows and improvisations, directly translated or locally produced, which can be stopped at will if some old folk at the central planning board decide they became too much to tolerate.

The Chinese government is going to rebuild the Silk Road under the initiative called “One Belt, One Road.” Unprecedented in size and scope, China’s infrastructure project will connect about 30 nations once it is completed in 2049. The Chinese government is planning to spend $1.4 trillion to modernize the Piraeus port in Greece they just bought, to build an oil pipeline in Myanmar and open new roads in Pakistan. They believe this should solve the global woes.

But the Chinese people have their own woes: Still, the party keeps persecuting different groups – intellectuals, artists, clergy, conservatives, and reformists – because they are outside the party’s control. Millions of people are still living on a handful of rice a day. The party does not pay attention to its own people’s misery. They are not aware of the impact of their Myanmar project on the Rohingyas, the Muslim people who are living along the route of these pipelines.

Mao wrote that their system is different in nature from imperialism. He taught the Chinese people that because imperialism is divorced from the masses of the people and is disliked by everybody it could not withstand the winds of change.

What one can see in China today is a big decadent political system, divorced from everyone, trying to stifle the newborn forces of economic and social spheres. One only hopes that Mao’s own law that failed to work internationally would work internally.

Desert diplomacy of UAE
Plan A of USA for Turkey
Comment