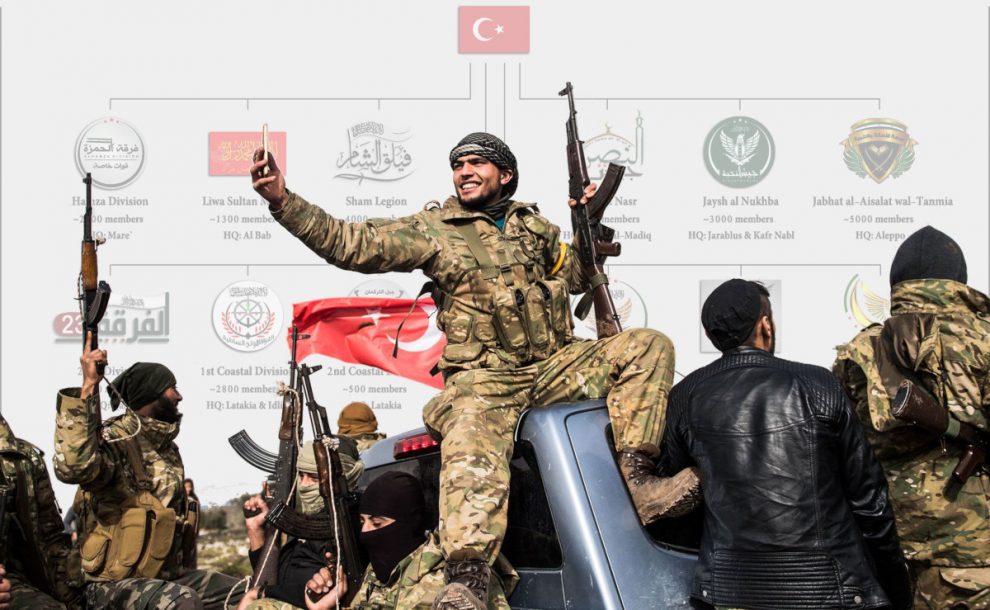 While some media outlets reported efforts in Syria as “internal fighting among Turkey-backed groups,” in reality, there was a “clean up” operation with the backing of Turkish Armed Forces in order to wipe criminal gangs from Afrin and Aleppo.

After Turkey and the allied Syrian opposition factions launched Operation Euphrates Shield and Operation Olive Branch, both areas in northern Aleppo and Afrin were cleaned from Daesh and YPG militants. After the success of these military operations, the Syrian opposition and Turkey invested in reconstructing, re-organizing, and re-building these liberated areas. However, the war-torn region faced a new security challenge, especially after the massive arrival of new internally displaced peoples (IDPs) from Ghouta, Homs, Hama, Derra, DeirEzzor, Raqqa, and Manbij. While Daesh and YPG cells have tried to sabotage the new administration of the Syrian opposition with terror attacks, other criminal gangs took advantage of the situation.

Although Turkey invested a lot to help the Free Syrian Police and the National Army recruit and train, criminal gangs exploited the weak security situation to harm the local population. Only after both Turkish-trained structures reached a certain level, on 19 November, the National Army and the Free Syrian Police started a wide-scale operation targeting those criminal gangs with the support of Turkey. The entire operation also gives a hint about the future security problems awaiting in Syria.

After Turkey trained the National Army and the Free Syrian Police, the two structures were able to kick-start a wide-scale operation targeting criminal gangs operating in Syria.

Over time, Shuhada al Sharqiyyah reorganized itself under the leadership of Abdurrahman el Huseyn, who is also known as Abu Hawl. While some claims suggest the faction to have up to 400 fighters, figures near 100-150 seem more realistic. After the faction reorganized itself in Afrin, it started to commit several crimes against the local population, including robbery, extortion, and other criminal activities.

On the evening of 18 November, a curfew was declared over Afrin, and the day after, the National Army and the Free Syrian Police started a joint operation with the support of the Turkish Armed Forces in order to disband the faction, to arrest its members, and to hand them to the criminal court. With the start of the operation, the Shuhada al Sharqiyyah faction showed fierce armed resistance using heavy weapons. This resistance led to clashes between both sides, which continued over midnight. Nevertheless, the National Army and the Free Syrian Police succeeded and arrested the faction members. During the clashes, several members of Shuhada al Sharqiyyah were killed and injured.

With these clashes ending in a determinate result of disbanding Shuhada al Sharqiyyah, the National Army, the Free Syrian Police and Turkish authorities displayed their decisiveness to combat criminal gangs in northern Aleppo and Afrin. With the end of these clashes, the leadership of the National Army published a new statement, saying:  “Our Security Operation Will Continue!”

On 20 November, the National Army leadership published a statement saying that they will continue with their security operation. The operation continued in Al-Bab in which several criminals were arrested and handed over to the Military Police of the Free Syrian Police. In contrast to the first day of the operation, criminal gangs have not attempted to resist against the National Army or the Free Syrian Police, as the decisiveness of the operation had become crystal clear.

Also, in contrast to the first day, the Military Police played a bigger role in arresting several in Al-Bab. However, a commander in the Northern Brigade, which is a component of the National Army told the author that all operations were spearheaded by the National Army. As seen on several images, the operation was conducted with heavy weapons in case of resistance from armed criminal gangs. Among the arrested in Al-Bab were Mohammed Abdulkarim Jard, Abdurrazzaq Waki and some remnants of Shuhada al Sharqiyyah in the village of Tal Aisha, north of Al-Bab.

During the same day, the Free Syrian Police captured a bomb loaded vehicle inside Azaz, which may be another sabotage and terrorism attempt by either YPG or Daesh militants. Due to the geographical situation of Azaz, which is close to YPG-held Tal Rifaat, YPG militants are the most likely suspects. Also, on the same day, Firka Hamza, which is a component of the National Army, handed over its checkpoints in Basuta in the Afrin region to the Free Syrian Police. At the end of the day, the Chief of Staff of the National Army published a statement, which imposed a curfew over Jarabulus for 21 November.

On 21 November, the security operation continued in Jarabulus, and a curfew was imposed on the city. Several criminals were arrested by the National Army and the Military Police of the Free Syrian Police and with the withdrawal of the National Army, the city control was fully handed over to the Free Syrian Police again. Within the third day of the operation, the Jarabulus court published a statement calling for people to file criminal complaints. At the end of the day, the leadership of the National Army published a new statement imposing a curfew over Al-Rai.

The last operation was conducted on 24 November in Jinderes which is located in the Afrin region. The National Army and the Military Police arrested around 50 criminals and 8 criminals surrendered themselves to the authorities. At the end of the day, the National Army leadership published a statement declaring the end of the operation while pointing out that efforts against criminal gangs will continue.

After the security operation

While the entire operation began with a huge challenge, and all operations following were reported by several media outlets as “internal fighting among Turkey-backed groups,” in reality, it was a “clean up” operation, with the backing of Turkish Armed Forces. An important period of training, organization, supply and supervision by Turkey, the National Army, and the Military Police of the Free Syrian Police, succeeded to disband a strong faction, which proved the effectiveness of Turkish efforts inside Syria.

While some media outlets reported efforts in Syria as “internal fighting among Turkey-backed groups,” in reality, there was a “clean up” operation with the backing of Turkish Armed Forces in order to wipe criminal gangs from Afrin and Aleppo.

However, the entire operation also gives us a hint about what will affect Syria’s security after peace, or at least after a more permanent ceasefire and de-escalation. Criminal gangs in the war-torn country have profited a lot from unstable conditions of Syria and the absence of state authority.

In all areas in Syria, criminal gangs are causing harm to the civil population. While areas controlled by the Russian and Iranian-backed Assad regime and U.S.-backed YPG still haven’t started wide scale operations to confront these criminal gangs, Turkey has put its weight behind such an operation in order to improve the living conditions of Syrians inside Syria, and to further accelerate the return of refugees.